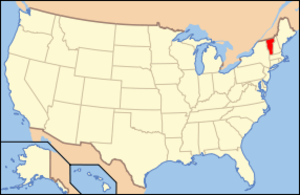 The Essex-Orleans Senate district includes the town of Barton, as well as parts or all of Essex County, Orleans County, Franklin County and Lamoille County. It is represented in the by (R) and (D).

In the , Barton forms part of the Orleans-Caledonia-1 district. Its representatives are John Morley (R) and (D).

The principal rock is calciferous mica . About two miles from the Irasburg line, and parallel with it, there is a narrow vein of hornblende schist the whole length of the town. In the eastern corner, covering an area of several square miles, the rocks are a mixture of , , and protogine. [ [http://dict.die.net/protogine protogine - definition from dictionary.die.net ] ] has been found in small quantities, and some traces of .

Each spring the rainbow trout swim up the Willoughby River to .

There were 1,153 households out of which 32.0% had children under the age of 18 living with them, 49.6% were married couples living together, 10.1% had a female householder with no husband present, and 35.1% were non-families. 30.4% of all households were made up of individuals and 16.7% had someone living alone who was 65 years of age or older. The average household size was 2.33 and the average family size was 2.86.

Ethan Allen Manufacturing, in the village of Orleans, employees about 400 workers locally. [http://vtwoodnet.org/news_articles/ethan_allen_power_plant.htm]

The Barton side of Barton town is serviced by Barton Electric which generates some of its power hydroelectrically. It services 2100 customers.

The Orleans side of Barton town is serviced by The Village of Orleans Electric with 665 customers.

The opening of the Interstate north on November 9, 1972 and opening south in 1978 had an impact on the town comparable to the opening of the railway a century earlier. In 1980, Barton registered its first population gain in a century.

While the (The ) runs through Barton, it does not service the town.

were forced to retreat through the area following their attack on Saint-Francis, Quebec in 1759. The fleeing rangers split up before getting to Barton. One group followed the Barton River south to the falls at the outlet of Crystal Lake where they were able to catch fish. From there, they continued south over the summit into the Passumpsic River Valley. [cite book | title=Sketches of Orleans, Vermont |year=1985 |id=ISBN 0-9610860-2-5 |publisher=Mempremagog Press |author=Darrell Hoyt, page 1]

From 1791 to 1793 built what is now called the "" linking Barton south to Greensboro and north through Brownington to Derby and Canada. [cite web | title=Vermont History|work=The Checkered Career of Timothy Hinman | url=http://www.google.com/search?q=cache:9PyVwK4aF2QJ:www.vermonthistory.org/journal/70/vt703_403.pdf+hinman+settler+road+built+timothy&hl=en&gl=us&ct=clnk&cd=2 | accessdate=2006-12-27]

The early settlers of Barton found Indian wigwams, in a decayed condition, quite numerous in the vicinity of the outlet of Barton pond (sic), from which it was inferred that it was a favorite camping ground. It is stated that an Indian, Foosah, claimed he killed twenty-seven moose, beside large numbers of beaver and otter near this pond in the winter of 1783-84.

On June 6, 1810, the body of water known today as flooded the Barton River Valley resulting in destruction, the results of which can still be seen today.

As each new railroad terminus was built, the stagecoaches used them as terminuses as well. The stage ran north from Barton from what is now the junction of State Road 58 and US 5, north to unite with the Hinman Settler Road which came out of Glover and ran up Barton Hill over what is now Maple Hill Road then straight over to what is now the Orleans Country Club and from there to Brownington.

Around 1900, a granite quarry was located on the east side of Crystal Lake. Steamboats barged stone across the lake.

Increasing steadlly, Barton's population reached a peak of 3,506 people in 1920.

In 1921, the town put on a large pageant celebrating its 125th anniversary. A professional choreographer and playwright was hired. Three hundred townspeople performed, watched by 4,500 paying spectators, a record audience for the county at the time. The investment of $1,000 was recouped. The area was afterwards known as Pageant Park, now owned by the Barton village.

The Portland Pipeline company built a crude oil pipeline to Montreal from Portland, Maine in 1941 to avoid u-boat attacks when shipping by sea during WWII. In 2005, the portion of the line that passes through Barton town was evaluated and taxed at $2,277,000.

In 1967, the school districts turned over their inadequately sized high schools, Barton Academy and Orleans High School to elementary school use and replaced them with .

The unincorporated village of South Barton, sometimes called Kimball Station no longer exists today. It was located near the Wheeler Mountain Road south of Crystal Lake on what is today, Route 5.

In 1858, Barton (and Orleans County) obtained a triangular piece of land from Sheffield which included all of May Pond, the entire area south of Crystal Lake, and the village of South Barton.

Its main industry was logging. The village foundered on lack of electric power which the other two villages in town had aggressively pursued. It tried to make up for this with steam power, but by the early 1940s the village was no longer viable. Its post office closed in 1947.

Three businesses operating serially with much of the same plant were the Orleans and Caledonia Steam Mill Company, Willoughby Wood and Lumber Company and US Bobbin and Shuttle Company. Eventually the location of the latter company to New York state finalized the village's demise.

Barton has two libraries, one in Barton village, one in Orleans.