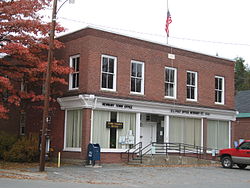 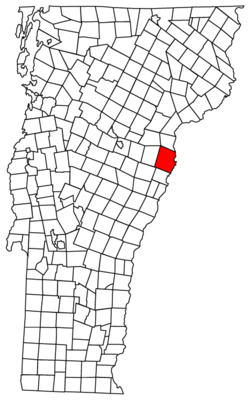 Located at the Great Oxbow of the Connecticut River, with vast tracts of beautiful and fertile intervale, the area was a favorite of the Indians. Rivers teemed with salmon and brooks with trout.[1] Prior to European settlement, the Newbury area was the location of a village called Cowass or Cowassuck of the Pennacook tribe.[2] It was first settled by English colonists in 1762 by Samuel Sleeper and family. One of the New Hampshire grants, Newbury was chartered by Governor Benning Wentworth on March 18, 1763 to General Jacob Bayley and 74 others, some from Newbury, Massachusetts.[3]

The town served as the southern terminus of the Bayley Hazen Military Road, begun by Bayley in 1760 and then continued until 1779 by Colonel Moses Hazen. Meanwhile, pioneer farmers had to carry their grain 60 miles (97 kilometers) by canoe to Charlestown, New Hampshire to get it ground into flour. By 1859, when the population was 2,984, Newbury had two gristmills, in addition to a paper mill and steam mill to manufacture mackerel kits. The principal industry, however, along the alluvial meadows was raising beef cattle and sheep, and the production of wool and dairy goods.[4] The Connecticut & Passumpsic Rivers Railroad opened on November 6, 1848 to the village of Wells River. It developed as an adjunct of the railway town across the Connecticut River at Woodsville, the once bustling village within Haverhill, New Hampshire.

Boston University, one of New England's largest universities, traces its roots to the establishment of the Newbury Biblical Institute, a Methodist school founded in Newbury, Vermont in 1839.[5]

The town is crossed by

There were 816 households out of which 29.4% had children under the age of 18 living with them, 55.6% were married couples living together, 7.7% had a female householder with no husband present, and 32.2% were non-families. 26.3% of all households were made up of individuals and 11.8% had someone living alone who was 65 years of age or older. The average household size was 2.40 and the average family size was 2.88.