Moral responsibility usually refers to the idea that a person has moral obligations in certain situations. Disobeying moral obligations, then, becomes grounds for justified punishment. Deciding what justifies punishment, if anything, is a principle concern of ethics.

People who have moral responsibility for an action are usually called moral agents. Agents are creatures that are capable of reflecting on their situation, forming intentions about how they will act, and then carrying out that action. Many believe that agency, and thus moral responsibility, requires free will. Thus, free will is an important issue in the debate on whether individuals are ever morally responsible for their actions—and, if so, in what sense. Incompatibilists think that determinism is at odds with free will, whereas compatibilists think the two can coexist.

Depending on how a philosopher conceives of free will, they will have different views on moral responsibility. 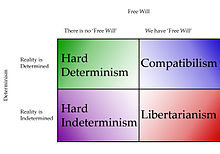 Various philosophical positions exist, disagreeing over Determinism and Free will

Metaphysical libertarians think our actions are not always causally determined, allowing for the possibility of free will and thus moral responsibility. All libertarians are also incompatibilists; they think that if causal determinism were true about human actions across the board, we would not have free will. Accordingly, libertarians subscribe to the principle of alternate possibilities, which posits that moral responsibility requires that we could have acted differently.[1]

Phenomenological considerations are sometimes invoked by incompatibilists to defend a libertarian position. In daily life, we feel as though choosing otherwise is a viable option. Although this feeling does not firmly establish the existence of free will, some incompatibilists claim the phenomenological feeling of alternate possibilities is a prerequisite for free will.[2]

Jean-Paul Sartre suggested that people sometimes avoid incrimination and responsibility by hiding behind determinism: "...we are always ready to take refuge in a belief in determinism if this freedom weighs upon us or if we need an excuse".[3] Of course, whether individuals really hide behind the doctrines of determinism has no bearing on the truth of those doctrines.

A similar view has it that individual moral culpability lies in individual character. That is, a person with the character of a murderer has no choice other than to murder, but can still be punished because it is right to punish those of bad character. How one's character was determined is irrelevant from this perspective. Robert Cummins, for example, argues that people should not be judged for their individual actions, but rather for how those actions "reflect on their character". If character (however defined) is the dominant causal factor in determining one's choices, and one's choices are morally wrong, then one should be held accountable for those choices, regardless of genes and other such factors.[4][5]

In law, there is a known exception to the assumption that moral culpability lies in either individual character or freely willed acts. The insanity defense — or its corollary, diminished responsibility (a sort of appeal to the fallacy of the single cause) — can be used to argue that the guilty deed was not the product of a guilty mind.[6] In such cases, the legal systems of most Western societies assume that the person is in some way not at fault, because his actions were a consequence of abnormal brain function.

The argument from luck

The argument from luck is a criticism against the Libertarian conception of moral responsibility. It suggests that any given action, and even a person's character, are the result of various forces outside that person's control. It may not be reasonable, then, to hold that person solely morally responsible.[7] Thomas Nagel suggests that four different types of luck (including genetic influences and other external factors) end up influencing the way that a person's actions are evaluated morally. For instance, a person driving drunk may make it home without incident, and yet this action of drunk driving might seem more morally objectionable if someone happens to jaywalk along his path (getting hit by the car).[8]

This argument can be traced back to David Hume. If physical indeterminism is true, then those events that are not determined are scientifically described as probabilistic or random. It is therefore argued that it is doubtful that one can praise or blame someone for performing an action generated randomly by his nervous system (without there being any non-physical agency responsible for the observed probabilistic outcome).[9]

Hard determinists (not to be confused with Fatalists) often use liberty in practical moral considerations, rather than a notion of a free will. Indeed, faced with the possibility that determinism requires a completely different moral system, some proponents say "So much the worse for free will!".[10] Clarence Darrow, the famous defense attorney, pleaded the innocence of his clients, Leopold and Loeb, by invoking such a notion of hard determinism.[11] During his summation, he declared:

St. Paul, in his Epistle to the Romans addresses the question of moral responsibility as follows: "Hath not the potter power over the clay, of the same lump to make one vessel unto honour, and another unto dishonour?"[12] In this view, individuals can still be dishonoured for their acts even though those acts were ultimately completely determined by God.

Joshua Greene and Jonathan Cohen, researchers in the emerging field of neuroethics, argue, on the basis of such cases, that our current notion of moral responsibility is founded on libertarian (and dualist) intuitions.[13] They argue that cognitive neuroscience research (e.g. neuroscience of free will) is undermining these intuitions by showing that the brain is responsible for our actions, not only in cases of florid psychosis, but even in less obvious situations. For example, damage to the frontal lobe reduces the ability to weigh uncertain risks and make prudent decisions, and therefore leads to an increased likelihood that someone will commit a violent crime.[14] This is true not only of patients with damage to the frontal lobe due to accident or stroke, but also of adolescents, who show reduced frontal lobe activity compared to adults,[15] and even of children who are chronically neglected or mistreated.[16] In each case, the guilty party can, they argue, be said to have less responsibility for his actions.[13] Greene and Cohen predict that, as such examples become more common and well known, jurors’ interpretations of free will and moral responsibility will move away from the intuitive libertarian notion that currently underpins them.

David Eagleman explains that nature and nurture cause all criminal behavior. He likewise believes that science demands that change and improvement, rather than guilt, must become the focus of the legal justice system.[17]

Greene and Cohen also argue that the legal system does not require this libertarian interpretation. Rather, they suggest that only retributive notions of justice, in which the goal of the legal system is to punish people for misdeeds, require the libertarian intuition. Many forms of ethically realistic and consequentialist approaches to justice, which are aimed at promoting future welfare rather than retribution, can survive even a hard determinist interpretation of free will. Accordingly, the legal system and notions of justice can thus be maintained even in the face of emerging neuroscientific evidence undermining libertarian intuitions of free will.

Neuroscientist David Eagleman maintains similar ideas. Eagleman says that the legal justice system ought to become more forward looking. He says it is wrong to ask questions of narrow culpability, rather than focusing on what is important: what needs to change in a criminal's behavior and brain. Eagleman is not saying that no one is responsible for their crimes, but rather that the "sentencing phase" should correspond with modern neuroscientific evidence. To Eagleman, it is damaging to entertain the illusion that a person can make a single decision that is somehow, suddenly, independent of their physiology and history. He describes what scientists have learned from brain damaged patients, and offers the case of a school teacher who exhibited escalating pedophilic tendencies on two occasions - each time as results of growing tumors.[18] Eagleman also warns that less attractive people and minorities tend to get longer sentencing - all of which he sees as symptoms that more science is needed in the legal system.[17]

Derk Pereboom defends a position he calls hard incompatibilism, according to which we cannot have free will (and thus cannot be morally responsible) whether determinism or indeterminism are true, if only events caused our actions. While Pereboom acknowledges that agent causation is still a possibility, he regards it as unlikely against the backdrop of the most defensible physical theories. Without agent causation, Pereboom thinks the freedom required for moral responsibility is not in the offing.[19]

Compatibilists contend that even if determinism were true, it would still be possible for us to have free will. The Hindu text The Bhagavad Gita offers one very early compatibilist account. Facing the prospect of going to battle against kinsmen to whom he has bonds, Arjuna despairs. Krishna attempts to assuage Arjuna's anxieties. He argues that forces of nature come together to produce actions, and it is only vanity that causes us to regard ourselves as the agent in charge of these actions. However, Krishna adds this caveat: “. . . [But] the Man who knows the relation between the forces of Nature and actions, witnesses how some forces of Nature work upon other forces of Nature, and becomes [not] their slave. . .” When we are ignorant of the relationship between forces of Nature, we become passive victims of nomological facts. Krishna's admonition is intended to get Arjuna to perform his duty (i.e., fight in the battle), but he is also claiming that being a successful moral agent requires being mindful of the wider circumstances in which one finds oneself.[20]Paramahansa Yogananda also said, "Freedom means the power to act by soul guidance, not by the compulsions of desires and habits. Obeying the ego leads to bondage; obeying the soul brings liberation."[21]

In the Western tradition, Baruch Spinoza echoes the Bhagavad Gita's point about agents and natural forces, writing “men think themselves free because they are conscious of their volitions and their appetite, and do not think, even in their dreams, of the causes by which they are disposed to wanting and willing, because they are ignorant [of those causes].”[22] Krishna is hostile to the influence of passions on our rational faculties, speaking up instead for the value of heeding the dictates of one's own nature: “Even a wise man acts under the impulse of his nature. Of what use is restraint?”[23] Spinoza similarly identifies the taming of one's passions as a way to extricate oneself from merely being passive in the face of external forces and a way toward following our own natures.[24]

Daniel Dennett asks why anyone would care about whether someone had the property of responsibility and speculates that the idea of moral responsibility may be "a purely metaphysical hankering".[25]

Mauro suggests that a sense of personal responsibility does not operate or evolve universally among humankind. He argues that it was absent in the successful civilization of the Iroquois.[26]

In recent years, research in experimental philosophy has explored whether people's untutored intuitions about determinism and moral responsibility are compatibilist or incompatibilist.[27] Some experimental work has included cross-cultural studies.[28] However, the debate about whether people naturally have compatibilist or incompatibilist intuitions has not come out overwhelmingly in favor of one view or the other, finding evidence for both views. For instance, when people are presented with abstract cases that ask if a person could be morally responsible for an immoral act when they could not have done otherwise, people tend to say no, or give incompatibilist answers. When presented with a specific immoral act that a specific person committed, people tend to say that that person is morally responsible for their actions, even if they were determined (that is, people also give compatibilist answers).[29]

The neuroscience of free will investigates various experiments that might shed light on free will.

Lack of sense of responsibility of psychopaths

One of the attributes defined for psychopathy is "failure to accept responsibility for own actions".[31]