New Windsor is a town in Orange County, New York, United States. The population was estimated at 25,244 in 2010 by the US Census.

The National Purple Heart Hall of Honor is located on Route 300 in the Town of New Windsor.

The region was part of patents granted to John Evans in the 17th century. The Town of New Windsor was created in 1762.

The present divisions of the town include, Little Britain, Rock Tavern and Vails Gate. The area that now encompasses the town was granted in a patent to Capt. John Evans-1694-1699. He was granted powers and privileges as Lord of the Manor. Capt. Evans had vacated his patent sometime after 1699, and about 1709 the portion of the town nearest the Hudson River was organized under the Precinct of the Highlands (Ulster County). This remained until 1743 as the precinct, which was attached to New Paltz. In 1762, separate precincts were created for the Town of New Windsor and Newburgh.

The name of the town is from Windsor England, with the "new" being prefixed. By whom this was conferred can not be ascertained, but, undoubtedly, is tied to remembrance of the sovereign.

During much of the Revolutionary War, New Windsor served as the major depot for the Continental Army and Army Medical Dept., the majority of Town residents supported the war efforts and its leaders.

In October 1782, the troops began to arrive and set up tents, while they began building their huts. This encampment or cantonment covered 1600 acres (6.5 km²) and quartered 6000-8000 men, women and children from New York, New Jersey, New Hampshire, Massachusetts and Maryland. Here this army built a log city of over 700 huts for the soldiers and many other out buildings, guardhouses, blacksmith shops, stable, kitchens and a hospital. In addition, a long building called the "Temple" was constructed. It was proposed by Rev. Israel Evans, Chaplain to the Army, that a structure be built for worship services; hence, this structure was built.

In order to reward the fidelity and faithfulness of soldiers, Gen.Washington ordered the establishment of an honor, the Badge of Merit be bestowed on them. Today, this honor is known as the Purple Heart.

In addition to the Last Encampment of the Continental Army hut sites owned by the Town of New Windsor, the temple site is operated by the State of New York, known as the New Windsor Cantonment. Located there is the Mountainville Hut, believed to be a survivor from the encampment.

Plum Point - (Kowawese Unique Area) - a new State/County/Town park opened in the fall of 1996, located directly on the shore of the Hudson River. From this vantage exquisite views of the Newburgh Bay to the North and Cornwall bay to the south can be seen. Plum Point was an almost always occupied site from pre-historic man to the present.

Rock Tavern - so named for early landmark which was a gathering place for many years. The Tavern owned and operated by John Humphrey in 1740 was located near the intersection of present day Forrester Road. The tavern gets its name from a large boulder which formed its foundation. It was here that the plans were made for the organization of the present Orange County.

Vails Gate - (formerly Mortinville & Tookers Gate N.Y.), today a thriving business community, was once the sleepy little hamlet into which all major roads crossed. These roads were part of the early private turnpike system, which was served by a toll gate to collect tolls. Remnants of former 19th century business community still exist including Lewis Hall on Rt 94 which served for many years as town hall meeting place prior to construction of 244 Union Ave., the old town hall.

Clancyville - Quassaick Bridge - early 19th century community built around once thriving manufacturing mills located on the Quassaick Creek. Established by many Polish, Italian and other immigrants who built small homes enlarging them as they prospered. The area was built on the early farm of John J. Clancy, who subdivided it into small building lots. Sometime referred to as Ducktown by local residents, whose practice was to keep ducks and other poultry about their homes.

Stewart International Airport - (formerly Stewart Air Force Base) Stewart is named after Capt. Lachlan Stewart, who skippered schooners and other sailing vessels about 1850-1870.

Stewart continued as part of the Strategic Air Command until the late 60's early 70's when the Air Force turned the base over to the MTA for use as a cargo facility. The grand plan to create a jetport lead to the acquisition of over 8000 acres (32 km²) of the present day buffer zone and the lost of many early farms and structures. During the late 1980s, through the efforts of the late State Senator Schermerhorn, the airport passed into the hands of the NY State Dept. Of Transportation. Today, Stewart International in addition to its civilian capability, is the home base of the NY Air National Guard & Marine Corp refueling wing.

There is a new entrance to Stewart International Airport, via New York State Route 747. Now for the first time, the Airport can be accessed directly from the Interstates without encountering local traffic on the state roads.

New Windsor has a Dfa Köppen climate classification (Humid Continental: Hot Summer subtype). It is situated in the temperate region of the northern hemisphere and has four distinct seasons. 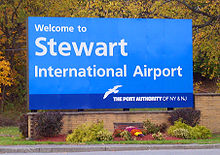 The Clintons were of Royal Personage - immigrating here they were related to Sir Henry Clinton in command of the British Army during the Revolution.

Communities and locations in the Town of New Windsor