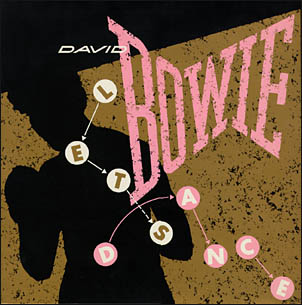 "Let’s Dance" is the title album track on 's album "Let's Dance". It was also released as the first single from that album in 1983, and went on to become one of his biggest-selling tracks.

The single was Bowie’s fastest selling to date, entering the UK singles chart at number five on its first week of release, and deposing ’s “” the following week, staying at the top of the charts for another fortnight. Soon afterwards, the single would top the , Bowie’s first single to reach number one on both sides of the Atlantic. It narrowly missed topping the Australian charts, peaking at number two.

“Let’s Dance” would introduce Bowie to a new younger audience oblivious to his former career in the '70s. The track was a regular on the Serious Moonlight Tour (the name derived from a lyric in “Let’s Dance”), the 1987 Glass Spider Tour and the 1990 Sound + Vision Tour, and was then reworked for the 2000 tour.

Heavily influenced by producer ’ work with his band Chic, “Let’s Dance" features a thumping bassline, and was arguably Bowie’s most commercial record up to that point. While the lyrics are ostensibly just those of a dance song, there is some discord struck by lines such as “Let’s dance, for fear tonight is all”. The 7:38 album version was heavily edited for single release, though the 12” single retained the full length.

This loneliness and desperation seeps into the , made with David Mallet on location in including , which features Bowie watching an Aboriginal couple’s struggles against metaphors of Western cultural imperialism impassively while playing with his band.

Bowie featured blues guitarist on the track. Vaughan was asked to go on tour with Bowie, but declined so he could continue to play with his band Double Trouble. Reportedly, Vaughan, who was still driving a delivery truck to support himself, was furious when he saw Bowie pantomiming over Vaughan's guitar solo in the video.

ubsequent references to the song

*Bowie himself appears in the film "" to the accompaniment of this song.
* covered the song for an 80s compilation for .
* covered "Let's Dance" during their live "Transmission" jam.
*A of the song appears in the game on the .
*The original song and music video appear on the game, .
*This song is featured in some promotional spots for the 2007 version of Hairspray.
* "appears" in the Let's Dance video in their music video for "".
* covers the song on his album "".
* sampled this song for his single "Hot Stuff" *
* In the indie film , the character Lily sings part of the song incorrectly to herself and is corrected by her lover Jarrod.
* UK Drum & Bass musician sampled this for his single 'Can't Punish Me' on the record label
* used a sample of this song for his single 'Been Around The World' from his album "No Way Out" in 1997.
* The song was sampled on a house cover version by Hi-Tack in 2007.
* It was covered live by in 2007.
* The song is referenced in the novel when a character is said to have looked like Bowie himself by a girl, and whispers as she walks away, "I should have hummed a few notes to 'Let's Dance'".