The cutting of DNA at specific boundaries

Enzyme
A protein that catalyzes a chemical reaction
Molecular recognition

The DNA sequence to which restriction enzymes bind

The DNA sequence that is cleaved by the restriction enzyme

Over 3000 restriction enzymes have been studied in detail, and more than 600 of these are available commercially[7] and are routinely used for DNA modification and manipulation in laboratories.[8][9][10]

For the first isolation of a restriction enzyme, HindII, in 1970,[11][12] and the subsequent discovery and characterization of numerous restriction endonucleases,[13] the 1978 Nobel Prize for Physiology or Medicine was awarded to Daniel Nathans, Werner Arber, and Hamilton O. Smith.[14] Their discovery led to the development of recombinant DNA technology that allowed, for example, the large scale production of human insulin for diabetics using E. coli bacteria.[15]

Restriction enzymes recognize a specific sequence of nucleotides[2] and produce a double-stranded cut in the DNA. While recognition sequences vary between 4 and 8 nucleotides, many of them are palindromic, which correspond to nitrogenous base sequences that read the same backwards and forwards.[16] In theory, there are two types of palindromic sequences that can be possible in DNA. The mirror-like palindrome is similar to those found in ordinary text, in which a sequence reads the same forward and backwards on a single strand of DNA strand, as in GTAATG. The inverted repeat palindrome is also a sequence that reads the same forward and backwards, but the forward and backward sequences are found in complementary DNA strands (i.e., of double-stranded DNA), as in GTATAC (GTATAC being complementary to CATATG).[17] Inverted repeat palindromes are more common and have greater biological importance than mirror-like palindromes.

Recognition sequences in DNA differ for each restriction enzyme, producing differences in the length, sequence and strand orientation (5' end or the 3' end) of a sticky-end "overhang" of an enzyme restriction.[18]

Restriction endonucleases are categorized into three or four general groups (Types I, II and III) based on their composition and enzyme cofactor requirements, the nature of their target sequence, and the position of their DNA cleavage site relative to the target sequence.[19][20][21] There are four classes of restriction endonucleases: types I, II,III and IV. All types of enzymes recognise specific short DNA sequences and carry out the endonucleolytic cleavage of DNA to give specific double-stranded fragments with terminal 5'-phosphates. They differ in their recognition sequence, subunit composition, cleavage position, and cofactor requirements,[22][23] as summarised below:

Type I restriction enzymes were the first to be identified and were first identified in two different strains (K-12 and B) of E. coli.[24] These enzymes cut at a site that differs, and is a random distance (at least 1000 bp) away, from their recognition site. Cleavage at these random sites follows a process of DNA translocation, which shows that these enzymes are also molecular motors. The recognition site is asymmetrical and is composed of two specific portions—one containing 3–4 nucleotides, and another containing 4–5 nucleotides—separated by a non-specific spacer of about 6–8 nucleotides. These enzymes are multifunctional and are capable of both restriction and modification activities, depending upon the methylation status of the target DNA. The cofactors S-Adenosyl methionine (AdoMet), hydrolyzed adenosine triphosphate (ATP), and magnesium (Mg2+) ions, are required for their full activity. Type I restriction enzymes possess three subunits called HsdR, HsdM, and HsdS; HsdR is required for restriction; HsdM is necessary for adding methyl groups to host DNA (methyltransferase activity) and HsdS is important for specificity of the recognition (DNA-binding) site in addition to both restriction (DNA cleavage) and modification (DNA methyltransferase) activity.[19][24] 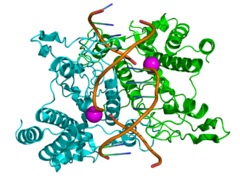 Structure of the homodimeric restriction enzyme EcoRI (cyan and green cartoon diagram) bound to double stranded DNA (brown tubes).[25] Two catalytic manganese ions (one from each monomer) are shown as magenta spheres and are adjacent to the cleaved sites in the DNA made by the enzyme (depicted as gaps in the DNA backbone).

Typical type II restriction enzymes differ from type I restriction enzymes in several ways. They are a dimer of only one type of subunit; their recognition sites are usually undivided and palindromic and 4–8 nucleotides in length, they recognize and cleave DNA at the same site, and they do not use ATP or AdoMet for their activity—they usually require only Mg2+ as a cofactor.[16] These are the most commonly available and used restriction enzymes. In the 1990s and early 2000s, new enzymes from this family were discovered that did not follow all the classical criteria of this enzyme class, and new subfamily nomenclature was developed to divide this large family into subcategories based on deviations from typical characteristics of type II enzymes.[16] These subgroups are defined using a letter suffix.

Type III restriction enzymes (e.g. EcoP15) recognize two separate non-palindromic sequences that are inversely oriented. They cut DNA about 20-30 base pairs after the recognition site.[26] These enzymes contain more than one subunit and require AdoMet and ATP cofactors for their roles in DNA methylation and restriction, respectively.[27] They are components of prokaryotic DNA restriction-modification mechanisms that protect the organism against invading foreign DNA. Type III enzymes are hetero-oligomeric, multifunctional proteins composed of two subunits, Res and Mod. The Mod subunit recognises the DNA sequence specific for the system and is a modification methyltransferase; as such it is functionally equivalent to the M and S subunits of type I restriction endonuclease. Res is required for restriction, although it has no enzymatic activity on its own. Type III enzymes recognise short 5-6 bp long asymmetric DNA sequences and cleave 25-27 bp downstream to leave short, single-stranded 5' protrusions. They require the presence of two inversely oriented unmethylated recognition sites for restriction to occur. These enzymes methylate only one strand of the DNA, at the N-6 position of adenosyl residues, so newly replicated DNA will have only one strand methylated, which is sufficient to protect against restriction. Type III enzymes belong to the beta-subfamily of N6 adenine methyltransferases, containing the nine motifs that characterise this family, including motif I, the AdoMet binding pocket (FXGXG), and motif IV, the catalytic region (S/D/N (PP) Y/F).[28][29]

Since their discovery in the 1970s, more than 100 different restriction enzymes have been identified in different bacteria. Each enzyme is named after the bacterium from which it was isolated using a naming system based on bacterial genus, species and strain.[39][40] For example, the name of the EcoRI restriction enzyme was derived as shown in the box.

They are used to assist insertion of genes into plasmid vectors during gene cloning and protein expression experiments. For optimal use, plasmids that are commonly used for gene cloning are modified to include a short polylinker sequence (called the multiple cloning site, or MCS) rich in restriction enzyme recognition sequences. This allows flexibility when inserting gene fragments into the plasmid vector; restriction sites contained naturally within genes influence the choice of endonuclease for digesting the DNA since it is necessary to avoid restriction of wanted DNA while intentionally cutting the ends of the DNA. To clone a gene fragment into a vector, both plasmid DNA and gene insert are typically cut with the same restriction enzymes, and then glued together with the assistance of an enzyme known as a DNA ligase.[41][42]

In a similar manner, restriction enzymes are used to digest genomic DNA for gene analysis by Southern blot. This technique allows researchers to identify how many copies (or paralogues) of a gene are present in the genome of one individual, or how many gene mutations (polymorphisms) have occurred within a population. The latter example is called restriction fragment length polymorphism (RFLP).[45]

Examples of restriction enzymes include:[46]