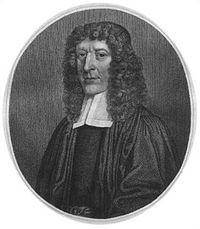 Ralph Cudworth (1617 – 26 June 1688) was an English philosopher, the leader of the Cambridge Platonists.

Born at Aller, Somerset, he was educated at Emmanuel College, Cambridge, gaining his MA and becoming a Fellow of Emmanuel in 1639.[1] In 1645, he became master of Clare Hall and professor of Hebrew. In 1654, he transferred to Christ's College, Cambridge, and was master there until his death. His great work, entitled The True Intellectual System of the Universe, was published in 1678. He was a leading opponent of Thomas Hobbes.

His father Dr. Ralph Cudworth, a Fellow of Emmanuel College, Cambridge, was presented to the rectory of Aller, Somerset by his college, which held the advowson,[2] in c.1609 or 1610.[3] On 18 June 1611 at Southwark[4] he married Mary Machell of Hackney (who had been a nurse to Prince Henry the son of James I)[5] and their children were christened at Aller[6] over the following decade.

Dr. Cudworth died in 1624 when young Ralph was about 7, and his mother then married John Stoughton, who succeeded Dr. Cudworth as rector of Aller until 1632 and gave the boy a good home education. Ralph was sent to his father's college, was elected Fellow in 1639 and became a successful tutor. In 1642 he published A Discourse concerning the true Notion of the Lord's Supper and a tract entitled The Union of Christ and the Church. In 1645 he was appointed master of Clare Hall and the same year was elected Regius professor of Hebrew. He was now recognized as a leader among the remarkable group known as the Cambridge Platonists. The whole party was more or less in sympathy with the Commonwealth, and Cudworth was consulted by John Thurloe, Cromwell's secretary to the council of state, in regard to university and government appointments.

In 1650 he was presented to the college living of North Cadbury, Somerset. From the diary of his friend John Worthington we learn that Cudworth was nearly compelled, through poverty, to leave the university, but in 1654 he was elected master of Christ's College, whereupon he married. In 1662 he was presented to the rectory of Ashwell, Herts. In 1665 he almost quarrelled with his fellow-Platonist, Henry More, because the latter had written an ethical work which Cudworth feared would interfere with his own long-contemplated treatise on the same subject. To avoid clashing, More brought out his book, the Enchiridion ethicum, in Latin; Cudworth's never appeared. Cudworth was installed prebendary of Gloucester in 1678. He died on the 26th of June 1688, and was buried in the chapel of Christ's. His only surviving child, Damaris, a devout and talented woman, became the second wife of Sir Francis Masham. The Lady Masham was distinguished as the friend of John Locke and exchanged letters with Gottfried Leibniz.

His sermons, such as that preached before the House of Commons, on 31 March 1647, advocate principles of religious toleration and charity. In 1678 he published The True Intellectual System of the Universe: the first part, wherein all the reason and philosophy of atheism is confuted and its impossibility demonstrated (imprimatur dated 1671). No more was published, perhaps because of the theological clamour raised against this first part. Much of Cudworth's work still remains in manuscript; A Treatise concerning eternal and immutable Morality was published in 1731; and A Treatise of Freewill, edited by John Allen, in 1838; both are connected with the design of his magnum opus, the Intellectual System.

The Intellectual System arose, so its author tells us, out of a discourse refuting "fatal necessity," or determinism. Enlarging his plan, he proposed to prove three matters:

(a) the existence of God;
(b) the naturalness of moral distinctions; and
(c) the reality of human freedom.

These three together make up the intellectual (as opposed to the physical) system of the universe; and they are opposed respectively by three false principles, atheism, religious fatalism which refers all moral distinctions to the will of God, and thirdly the fatalism of the ancient Stoics, who recognized God and yet identified Him with nature. The immense fragment dealing with atheism is all that was published by its author. Cudworth criticizes two main forms of materialistic atheism, the atomic, adopted by Democritus, Epicurus and Hobbes; and the hylozoic, attributed to Strato of Lampsacus, which explains everything by the supposition of an inward self-organizing life in matter. Atomic atheism is by far the more important, if only because Hobbes, the great antagonist whom Cudworth always has in view, is supposed to have held it. It arises out of the combination of two principles, neither of which is atheistic taken separately, i.e. atomism and corporealism, or the doctrine that nothing exists but body. The example of Stoicism, as Cudworth points out, shows that corporealism may be theistic.

Into the history of atomism Cudworth plunges with vast erudition.[7] It is, in its purely physical application, a theory that he fully accepts; he holds that it was taught by Pythagoras, Empedocles, and in fact, nearly all the ancient philosophers, and was only perverted to atheism by Democritus. It was first invented, he believes, before the Trojan war, by a Sidonian thinker named Moschus or Mochus, who is identical with the Moses of the Old Testament. In dealing with atheism Cudworth's method is to marshal the atheistic arguments elaborately, so elaborately that Dryden remarked "he has raised such objections against the being of a God and Providence that many think he has not answered them"; then in his last chapter, which by itself is as long as an ordinary treatise, he confutes them with all the reasons that his reading could supply. A subordinate matter in the book that attracted much attention at the time is the conception of the "Plastic Medium," which is a mere revival of Plato's "World-Soul," and is meant to explain the existence and laws of nature without referring all to the direct operation of God. It occasioned a long-drawn controversy between Pierre Bayle and Le Clerc, the former maintaining, the latter denying, that the Plastic Medium is really favourable to atheism.

A much more favourable judgment must be given upon the short Treatise on eternal and immutable Morality, which deserves to be read by those who are interested in the historical development of British moral philosophy. It is an answer to Hobbes's famous doctrine that moral distinctions are created by the state, an answer from the standpoint of Platonism. Just as knowledge contains a permanent intelligible element over and above the flux of sense-impressions, so there exist eternal and immutable ideas of morality. Cudworth's ideas, like Plato's, have "a constant and never-failing entity of their own," such as we see in geometrical figures; but, unlike Plato's, they exist in the mind of God, whence they are communicated to finite understandings. Hence "it is evident that wisdom, knowledge and understanding are eternal and self-subsistent things, superior to matter and all sensible beings, and independent upon them"; and so also are moral good and evil. At this point Cudworth stops; he does not attempt to give any list of Moral Ideas. It is, indeed, the cardinal weakness of this form of intuitionism that no satisfactory list can be given and that no moral principles have the "constant and never-failing entity," or the definiteness, of the concepts of geometry (these attacks are not uncontested - see, for example, the "Common Sense" tradition from Thomas Reid to James McCosh and the Oxford Realists Harold Prichard and Sir William David Ross). Henry More, in his Enchiridion ethicum, attempts to enumerate the "noemata moralia"; but, so far from being self-evident, most of his moral axioms are open to serious controversy.

The Intellectual System was translated into Latin by Johann Lorenz von Mosheim and furnished with notes and dissertations which were translated into English in John J. Harrison's edition (1845). For biography: