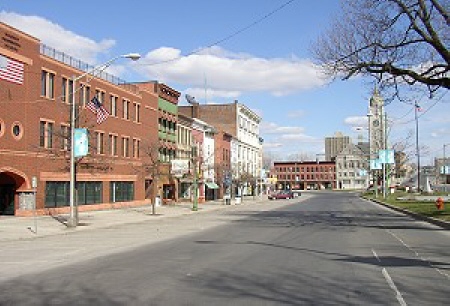 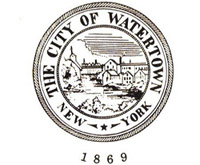 Watertown is a city in the State of New York and the of Jefferson County. It is situated near the Canadian border and the . As of the 2000 census, it had a population of 26,705. The base Fort Drum is near the city.

Named after the many falls located on the , the city developed early in the 19th century as a manufacturing center. From years of generating industrial wealth, in the early 20th century the city was said to have more millionaires per capita than any other city in the nation. Residents of Watertown built a rich public and private architectural legacy. It is the smallest city to have a park designed by , the celebrated who created in New York City.

Geographically, Watertown is located in the central part of Jefferson County. It lies 72.0 miles north of and 31 miles south of the Canadian border. The city is served by .

The city is known as the birthplace of the "Five and Dime" and the . It manufactured the first portable . It has the longest continually operating county fair in the and holds the Red and Black football franchise, the oldest surviving semi-professional team in the United States.

The city of Watertown was settled in 1800 by pioneers from , most notably Hart Massey, Henry Coffeen, and Zachariah Butterfield, part of a large migration into New York from after the . These pioneers chose the area due to the Black River. The pioneers' vision was for an industrial center that would draw power from the Black River. All the land was rough and unclear. Elevation was also a problem. The western end of the town was 12 to 15 feet higher than the eastern end, with a large depression in the middle. A small stream also passed through the town. In a few years, the center of town was cleared for the Public Square. [http://www.citywatertown.org/history/history_more.html] Together with the 19th century structures that created a around it, this is recognized as a listed on the .

The drop in the Black River at Watertown's location provided abundant water power for early industry. By the mid-19th century, entrepreneurs had built paper mills and major industries, including the first portable steam engine in 1847. In 1851 the city was joined to the state by the railroad. Other mills rapidly joined the business base and generated revenue to support public works projects like the water system and illuminating gas works in 1853, and a telephone system in 1879.

As businesses flourished, residents built ambitious retail buildings, churches and private residences. The , built in 1850 according to European and US models, is the oldest continuously operating enclosed mall in the United States. It is listed on the , as are several significant churches and private mansions.

Watertown became the of in 1805 and an Incorporated Village in . In 1869, Watertown was incorporated as a city. In 1920, the city adopted a city manager style of government. The Jefferson County Courthouse Complex is also listed on the .

An early industrial city that earned great wealth for many of its citizens by the turn of the 20th century, Watertown also developed an educated professional class of doctors and lawyers. As industrial technology shifted and jobs changed, Watertown suffered economic and population declines. The city has been working in recent decades to redevelop its downtown and capitalize on its rich architectural heritage, compact downtown and well-designed residential areas.

Today the city serves as the commercial and financial center for a large rural area. It is the major community closest to Fort Drum and the post's large population. Since the city is located just 25 miles from the international boundary via the , shopping by Canadian visitors is an important part of the local economy.

Notable people born in or who have resided in Watertown:

In , Watertown made minor national news when Timothy LaBouf of First Baptist Church of Watertown, N.Y., then a man, fired Mary Lambert, his church's teacher of 54 years, for being a woman. LaBouf cited as reason a change in church policy to interpret literally the first epistle to Timothy: "I do not permit a woman to teach or to have authority over a man; she must be silent." Mayor Jeffrey Graham was disturbed by this action and said: "If what's said in that letter reflects the councilman's views, those are disturbing remarks in this day and age." [http://articles.news.aol.com/news/_a/church-fires-teacher-for-being-female/20060821083709990008?ncid=NWS00010000000001] Timothy LaBouf and other leaders of First Baptist Church of Watertown were rebuked for this decision by several other Christian leaders, such as J.Lee Grady [http://www.charismamag.com/fireinmybones/] .

Watertown gained national attention when Watertown native and supermodel, Maggie Rizer, filed a multi-million dollar lawsuit against Mayor Graham and several other defendants. Rizer's stepfather, John Breen, Jr. had pirated as much as $7,000,000 from Rizer's financial accounts so he could play the state-sponsored game, Quick Draw, at several taverns - most notably Mayor Graham's bar, which was then named Speak Easy. (It is now Fort Pearl.) Breen was convicted and sent to prison on several felony counts. Mayor Graham was forced to give up his lottery license. This story was featured on a May 2005 episode of ABC's news magazine 20/20.

The Black River flows westward through the city toward . The Black River is a world-renowned destination. Competition-level events, such as the Blackwater Challenge, have been held on the river.

By tradition, the city's name was derived from the abundant water power available from the river. Businesses harnessed water power to create one of the early industrial centers in New York. Paper mills were historically a major industry for the city and contributed to its 19th c. wealth.

(JCC) is located in the western part of the city near the fairgrounds.

Major Highways and Roads that serve the Greater Watertown Area

One Interstate Highway runs through the Watertown area:

*I-81 is a north-south route that runs from near north to Hill Island, Ontario, connecting via the and a short connecting road to Highway 401 across the Canadian border. Interstate 81 passes just to the west of the city of Watertown, near .

One US Highway runs through the Greater Watertown area:

*US 11 runs from eastern to its northern terminus at the Canadian border in . US 11 runs north-south through the City of Watertown.

*NY 3 is an east-west route that begins in Sterling, NY and heads north and east to Watertown. NY 3 interchanges with I-81 at the city line. NY 3 heads east into Watertown, overlapping with both US 11 and NY 12 through downtown prior to leaving the city to the northeast to head through the to Plattsburgh.
*NY 12 is a north-south route through the city, extending northward to Clayton then following the to . A spur, NY 12E, takes a slightly-longer path through before rejoining NY 12.
*NY 12F is a spur connecting NY 12 in downtown Watertown to near the in Dexter.

Watertown television stations include WWNY/WNYF, ( 7/Fox 28, cable 4 and 2), WPBS (16 Watertown, 18 Norwood, cable 850, 851, 853) and WWTI (ABC 50/ 50.2, cable 5 and 31). Kingston and Syracuse locals are also in Watertown. Time-Warner is the incumbent cable provider for the Watertown area; and satellite are also readily available but neither currently carries Watertown's local broadcast stations.

Watertown claims that Rodman native conceived the idea of his mercantile chain while working there in 1878. Woolworth, employed as a clerk in Moore's Store, set up a successful clearance display of low-priced items. This led to his idea of a store specializing in fixed-price, cut-rate merchandise. Woolworth left Watertown and opened his first store in in 1879.

The Davis Sewing Machine Company originated in Watertown. It was predecessor to 's Huffy Corporation (NYSE: HUF), an American maker of bicycles and other sporting goods.

The were based in Watertown until 1999.

The fictional town of Rivet Town in the movie "Robots" is based on Watertown because movie director resided in Watertown during his .

Watertown was the setting for the 1990 film "Stella". While the movie was actually filmed in Canada, several local items were imported to appear in the film, including the local daily newspaper, taxi-cabs and shopping bags from the locally owned Empsalls department store.

air fresheners were invented in Watertown in 1951. Now the city is home to the Car-Freshner Corporation headquarters and manufacturing plant.

made a famous quote -- "I spent a week there one afternoon" -- about Watertown. His song "A Better Place to Be" was inspired by a story he heard in Watertown. Chapin mentioned both the quote and the origin of the song on his album .