WCAV is the CBS-affiliated television station for Charlottesville, Virginia. It broadcasts a high definition digital signal on UHF channel 19 from a transmitter on Carters Mountain. The station can also be seen on Comcast channel 6 and in high definition on digital channel 212. Owned by Gray Television, WCAV is sister to low-powered ABC affiliate WVAW-LD and low-powered Fox affiliate WAHU-CD. All three share studios, known as the "Charlottesville Newsplex", on 2nd Street Southeast in Downtown Charlottesville.

In addition, some behind-the-scenes duties are run alongside that of sister station WHSV-TV in Harrisonburg (which the "Newsplex" has a resource sharing alliance with). Syndicated programming on the station includes: Entertainment Tonight, Judge Judy, Family Feud, and Who Wants to Be a Millionaire. WCAV can also be seen on WVAW's second digital subchannel (on UHF channel 16.2) from the same transmitter.

On WCAV-DT2 and Comcast digital channel 209 is The Local AccuWeather Channel. On WCAV-DT3 is a standard definition simulcast of WAHU.

WCAV began broadcasting on August 15, 2004 becoming the market's first CBS affiliate and first station to mount a challenge against established NBC affiliate WVIR-TV. Previously, the analog UHF channel 19 allocation was considered to bring Richmond a primary WB station. That area had lacked such an affiliation since the switch of WUPV to UPN in 1997. Charlottesville had previously received CBS programming on cable from Richmond's WTVR-TV and Washington D.C.'s WUSA. When it launched, WCAV immediately replaced WUSA on local cable systems.

During 2007, the station first swapped analog cable channel allocations with WTVR. After that, the Richmond station moved to the digital tier. Shortly after WCAV's sign-on, owner Gray Television signed on ABC affiliate WVAW-LP on UHF channel 16. That station was formerly a low-powered repeater (on UHF channel 64) of Harrisonburg's WHSV and it replaced that station on Charlottesville-area cable systems. In early-2005, the two stations were joined by new Class A Fox affiliate WAHU-CA on UHF channel 27.

Since 2006, the three have been the official flagships of University of Virginia sports. The station is not related to the former WCAV-FM (now WKAF-FM) in Brockton, Massachusetts. After performing a flash-cut, WCAV's broadcasts have been digital-only since February 16, 2009. Of all of the Richmond and Washington D.C. stations replaced on the main tier for the new Charlottesville ABC, CBS, and Fox affiliates, only WTTG survived. On Comcast digital cable, Richmond channels include WRIC-TV and WTVR. WUSA is not on digital cable nor is any other district station. Other Comcast providers north and west of Charlottesville do pick up Washington and Richmond locals either on the main tier or digital lineup. 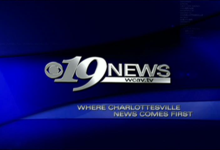 WCAV and its sister stations employ the largest television news team dedicated exclusively to the Charlottesville market. While WVIR dedicates some staff to adjacent areas, WCAV focuses its coverage solely on the counties that comprise the Charlottesville viewing area. In June 2006, WCAV received the runner-up award for "Outstanding News Operation" by the Virginia Association of Broadcasters. WWBT in Richmond was the winner in that category. In 2007, the station received the "Outstanding Sports Coverage" award for a commercial television station from the Virginia Association of Broadcasters.

That same year, its website was the runner up to WVEC in Norfolk for an outstanding website award. Beth Duffy, formerly of WVIR, returned to the airwaves on WCAV on April 16, 2007. On September 21, 2007 WCAV launched The Local AccuWeather Channel on a new second digital subchannel and live streaming video on its website. Known on-air as "CBS 19 Weather Now", it was added to Comcast digital channel 209 in December. Programming consists of local weather updates and national weather forecasts provided by AccuWeather.