Milford is a town in Worcester County, Massachusetts, United States. It had a population of 27,999 at the 2010 census.

For geographic and demographic information on the census-designated place Milford, constituting the center of the town, please see the article Milford (CDP), Massachusetts.

Milford was first settled in 1662 and was officially incorporated in 1780. It was originally the eastern part of Mendon, called "Mill River".

Milford is renowned for its pink Milford granite, discovered in 1870. Some of this granite has been used for buildings in New York City, Washington, D.C., and Paris, along with a number of war memorials and other monuments, including the Battle Monument at West Point.

Today, it is recognized, in part, for its health care facility - the Milford Regional Medical Center. In January 2008, the Center opened a cancer treatment facility with the Dana–Farber Cancer Institute. The Center is affiliated with UMass Medical Center as a teaching hospital.

Milford is also the home of the "My One Wish" foundation, started in 1984.

Milford is located in Central Massachusetts, bordered by:

There were 10,420 households out of which 33.4% had children under the age of 18 living with them, 54.0% were married couples living together, 11.2% had a female householder with no husband present, and 30.9% were non-families. 25.6% of all households were made up of individuals and 9.5% had someone living alone who was 65 years of age or older. The average household size was 2.54 and the average family size was 3.08.

Milford has been growing at a fast rate since the introduction of Interstate 495 decades ago. Since then, major retailers have opened in town, including Kmart, Kohl's, Target, Lowe's, and Sports Authority. Other retailers which recently opened stores in Milford include Friendly's, T.G.I. Friday's, Bed Bath & Beyond, Staples, Petco, and Best Buy. Milford was fictitiously featured in a 2008 episode of the Fox television series Fringe.[12]

The core of Milford's governing system is the Open Town Meeting, where citizens can voice their opinions, but more importantly, directly affect changes in the community. Along with a Board of Selectmen, Town Administrator, Planning Board, Finance Committee, etc., the citizens of Milford have direct input into how the town is run. 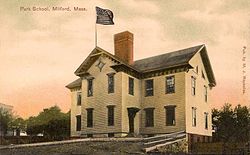