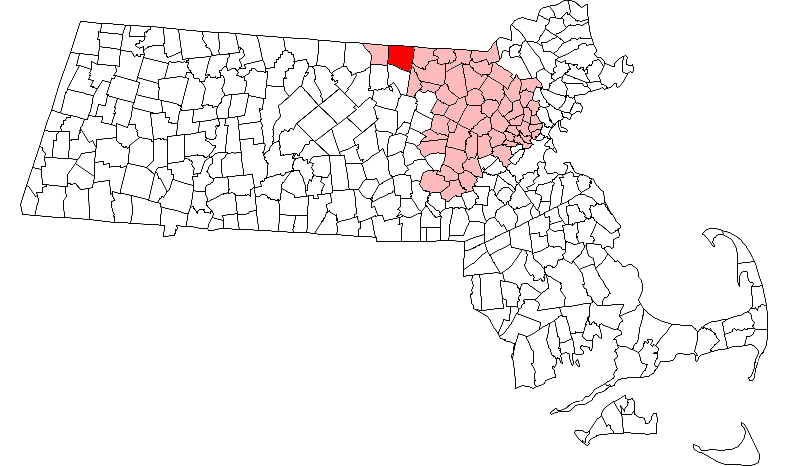 For geographic and demographic information on the Townsend, please see the article Townsend (CDP), .

Townsend was first settled in 1676 and was officially incorporated in 1732.

Taken From "A Brief History of Townsend""Townsend, Massachusetts was incorporated as a Town on June 29, 1732 and was named after Viscount Charles Townshend, a British cabinet minister. About 1780, residents and town clerks began to spell Townsend by omitting the "H" and giving it its present orthography.

Townsend was incorporated in 1732. The first Meeting House was built about 1730 on top of Meeting House Hill. As the town grew, the meetinghouse became too small, so a new and larger one was erected just behind the first one. The people then wanted a meetinghouse more centrally located, so the House was moved to the center of Town and became the Methodist Church. The church has been renovated recently and the old slave pews were preserved.

The first mill of the town was built in 1733 in "Townsend Harbor." The pond at Townsend Harbor came into existence in 1734 when the dam was built for this mill. The Conant House, Grist Mill and Cooperage are places to visit now, in the Harbor. The Reed House belongs to the Historical Society and a "must" to visit.

Up until 1744, the only schooling that most children received was from their parents in their own home. During that year the town voted to raise and appropriate 20 pounds for the support of three schools. Later, the town progressed and small school houses were built throughout the town. Some are still standing today. Still later, they held school in the large white building opposite the Common on the corner of School, Howard, and Highland Streets. In 1835 for about 25 years, there was a Female Seminary in the "West Village", which eventually failed for financial reasons.

When the British marched on Concord on April 19, 1775, word was received in Townshend that afternoon. A cannon was fired on the common - calling out the alarm. Seventy-three men from town marched to Concord to join the other towns in fighting the British. These men were gone twenty-one days, at which time they were called back to take care of the Tories reported in Townsend. Several Tory properties were confiscated and sold at this time.

The Boston and Keene, NH stagecoaches began to run in 1806, initially making three trips a week. Soon it became a popular trip, and they made one trip daily. The stages would arrive about noon in the "West Village" and the passengers dined at the Joslinville Tavern (the big mansion at the corner of Main Street and West Meadow Road - now 519 Main Street).

The largest business for many years was the coopering business. This was run by the Fessenden family for three generations. It was located between the railroad tracks and Route 119 (Main Street) near the center (behind the Medical building). When the business ceased operations in 1960, most of the building was torn down. Later it burned completely.

A complete history of the town by Isthmar Sawtelle is in the public library and the office of the Town Clerk. Also, a book called Divinity and Dust, by Richard Smith, published in 1975 tells the story of Townsend's past. A record book of the Vital Records of Townsend was recently published in 1992, Vital Records from 1732 to 1850. Also, A Village Hooped in Steel, about the Fessenden family, written by Richard N. Smith, was printed in 1979 by Nashoba Publication."

A Brief History Of Townsend

There were 3,110 households out of which 44.5% had children under the age of 18 living with them, 67.5% were married couples living together, 9.0% had a female householder with no husband present, and 20.4% were non-families. 16.1% of all households were made up of individuals and 5.2% had someone living alone who was 65 years of age or older. The average household size was 2.96 and the average family size was 3.34.