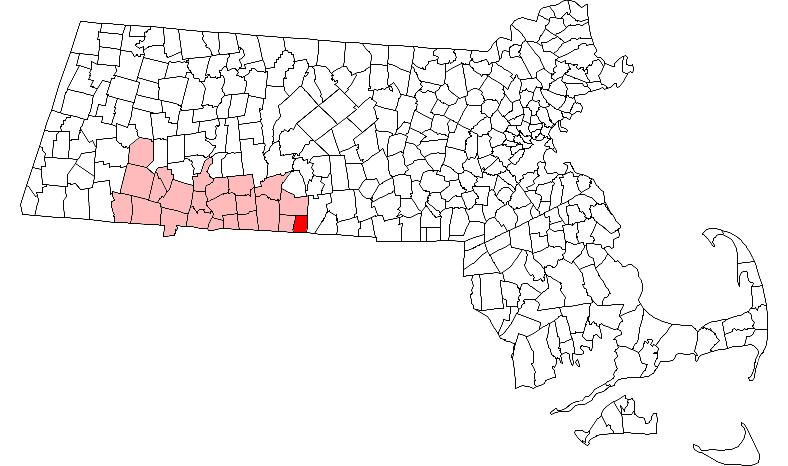 Holland is a town in Hampden County, , . The population was 2,407 at the 2000 census. It is part of the Metropolitan Statistical Area.

Part of the town comprises the of Holland.

, a Massachusetts congressman offered the following history of Holland to the House on Thursday, .

"Mr. Speaker, I rise to recognize and honor the town of Holland, Massachusetts on the dedication of its new Town Hall and the celebration of its 215th .

"In 1730, the Town of Holland was settled by Joseph Blodgett, whose descendants still live in the town today. The Town was named after Lord Holland, an English statesman who lobbied for independence for the . The town was incorporated on , , and is rich with history.

"Holland is located in the southeast corner of Hampden County in . The town is four square miles in area. It contains the Quinnebaug River and the Hamilton Reservoir, one of the largest reservoirs in southern . It is nestled amongst two hill ranges, where elevations reach up to 1,100 feet.

"Throughout the years, Holland has remained an example of the charm and beauty of the traditional New England village. At different times, it has sustained industries such as , the manufacturing of , and making. To this day, Holland is known most for its recreational opportunities. There are extensive recreational facilities at the Hamilton Reservoir, which is stocked with each year by the state of Massachusetts. There is also a park and a swimming area at the very picturesque Lake Siog. This small town remains as alive and healthy today as it was 215 years ago.

"Unfortunately, the 200-year old town hall was destroyed in a horrendous fire in December 1995. The new Town Hall, which was dedicated on , , stands as a testament to the courage and character of the 2,300 residents of this wonderful town. I want to acknowledge this town and its residents as they celebrate their new Town Hall as well as their 215th anniversary."

According to the , the town has a total area of 13.1 s (33.9 ), of which, 12.4 square miles (32.1 km²) of it is land and 0.7 square miles (1.8 km²) of it (5.34%) is water. Holland is bounded on the east by Sturbridge; on the south by Union, ; on the west by Wales; and on the north by Brimfield. Holland is equidistant between Springfield and Worcester, a distance of approximately 30 miles. Holland is also within commuting distance (approximately 35 miles) from , as it is located along the Interstate 84 corridor on the Massachusetts-Connecticut border.

There were 898 households out of which 37.5% had children under the age of 18 living with them, 62.5% were married couples living together, 7.3% had a female householder with no husband present, and 25.6% were non-families. 18.0% of all households were made up of individuals and 4.9% had someone living alone who was 65 years of age or older. The average household size was 2.68 and the average family size was 3.06.

Holland Elementary School, serving grades preschool-6, has its own , part of School Union 61. The town is considering merging its elementary school with Wales'. Holland students attend Tantasqua Regional Junior High School (grades 7-8) and in Sturbridge. Union 61 and the Tantasqua district share administrators, including the superintendent, and both include Brimfield, Brookfield, Holland, Sturbridge and Wales.