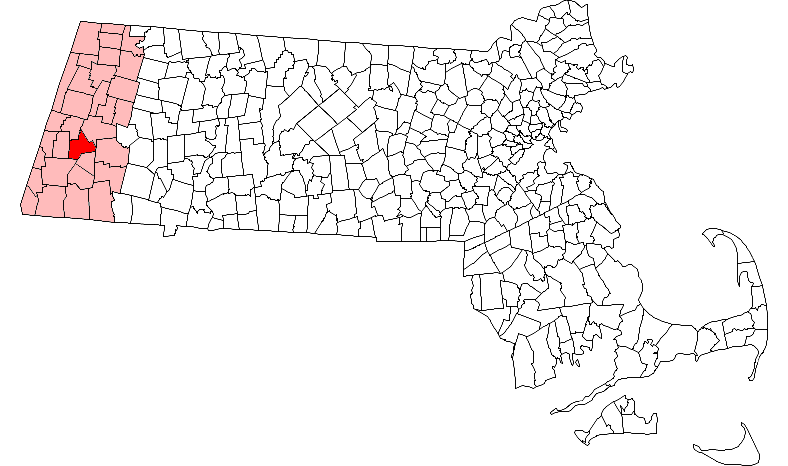 Lee is a town in Berkshire County, , . It is part of the Pittsfield, . The population was 5,985 which was determined in the 2000 census. Lee, which includes the villages of South and East Lee, is part of the Berkshires .

This was once territory of the Indians. It was first settled as Dodgetown in 1760, then incorporated in 1777 as Lee. Formed from parts of Great Barrington and Washington, it was named after General . In the autumn of 1786 during , about 250 followers of encountered state troops commanded by General near the village of East Lee. The paraded a fake crafted from a beam, and the troops fled.

Early industries included and , with lime made in s. Operated by from the , mills produced s and . But became the principal business, with the first , called the Eagle Mill, built in 1806 at South Lee by Samuel Church. The Columbia Mill was established in 1827, and would be the first to supply 100% groundwood to "". By 1857, there were 25 paper mills in Lee. The Smith Paper Company discovered how to manufacture paper solely from in 1867, and through the 1870s was the largest producer of paper in the country. Today, Lee has 3 large papermaking facilities owned by Schweitzer-Mauduit International, Inc., with another across the border in Lenox. The plants produce paper, wrappers and other specialty paper. But Schweitzer-Mauduit announced in 2007 that the mills would close in 2008, putting nearly 170 people out of work.

The town was also famous for the quality of its , with the first established in 1852. Almost 500,000 cubic feet of marble was excavated and shipped in 1867 on the . Buildings constructed of Lee marble include a wing of the Capitol in Washington and St. Patrick's Cathedral in .

Lee's 19th-century prosperity left it with fine period architecture, including the town hall and library. South Lee has a listed on the National Register. The former is now a popular tourist destination, noted both for its considerable Victorian charm and number of establishments. Lee was a filming location for "Before and After" (1996) and "The Cider House Rules" (1999).

Lee is located in the southern section of the Berkshires, in a valley along the . The town lies to the west of October Mountain State Forest, with two sections of the forest in Lee. In the southwest corner of town lies a portion of Beartown State Forest, where Burgoyne Pass crosses the northern end of the mountain. Hop Brook, a marshy brook which flows into Tyringham, flows into the Housatonic in the south, and other bodies of water include Laurel Lake to the north, and Goose Pond to the southeast. The circumvents the eastern part of the town, passing through Tyringham, Becket and Washington.

Lee is located along (also known as the ), and is home to Exit 2, the westernmost full exit on the turnpike (Exit 1, in West Stockbridge, is only a turnaround exit) as well as the first service area along the Pike. (The exit is also well-known because if a driver misses Exit 3 in Westfield, it requires a 60-mile round trip through Exit 2 to get back to Westfield.) Lee lies along , the "old Mass Pike," which was the main route to New York State prior to the interstate. A small section of crosses through the northwest corner of town before meeting Route 20 in Lenox. Additionally, Route 102's eastern terminus is located at Route 20 at the Exit 2 toll plaza.

There were 2,442 households out of which 28.6% had children under the age of 18 living with them, 51.7% were married couples living together, 10.2% had a female householder with no husband present, and 34.2% were non-families. 28.2% of all households were made up of individuals and 12.6% had someone living alone who was 65 years of age or older. The average household size was 2.39 and the average family size was 2.91.

Lee uses the form of government, and is led by a and a . Lee has its own police, fire and public works departments, as well as a post office. The town's library is a member of the regional library networks.

On the state level, Lee is represented in the by the Fourth Berkshire district, which covers southern Berkshire County, as well as the westernmost towns in Hampden County. In the , the town is represented by the Berkshire, Hampshire and Franklin district, which includes all of Berkshire County and western Hampshire and Franklin Counties. [ [http://www.mass.gov/legis/citytown.htm Senators and Representatives by City and Town] ] The town is home to the First Station of Barracks "B" of the . [ [http://www.mass.gov/?pageID=eopsterminal&L=5&L0=Home&L1=Law+Enforcement+%26+Criminal+Justice&L2=Law+Enforcement&L3=State+Police+Troops&L4=Troop+B&sid=Eeops&b=terminalcontent&f=msp_divisions_field_services_troops_troop_b_msp_field_troop_b_station_b1&csid=Eeops Station B-1, SP Lee] ]

Lee operates its own school department, which also serves the town of Tyringham. Lee Elementary School serves students from pre-kindergarten through sixth grades, and the Lee Middle and High School serves students from seventh through twelfth grades. Lee's athletics teams are nicknamed the Wildcats, and their colors are black and orange. Additionally, Lee is home to Saint Mary's School, a school which serves students through eighth grade. Other private schools can be found in Great Barrington and other surrounding towns.