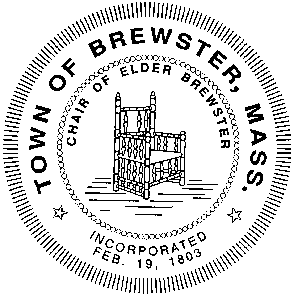 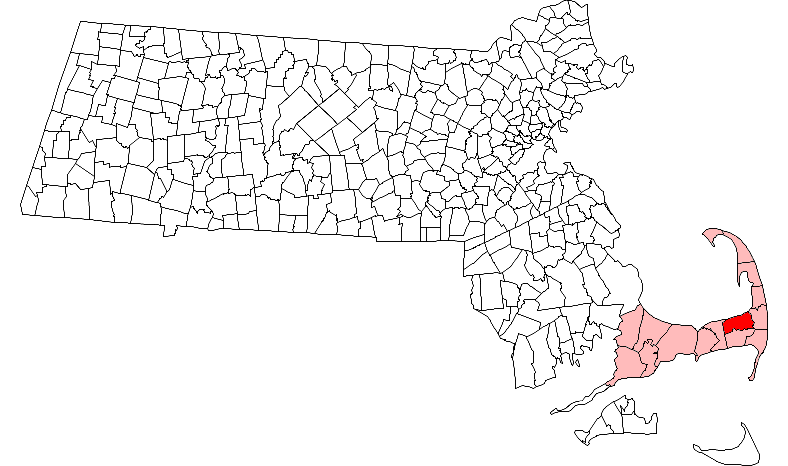 Brewster is twinned with the town of in the .

The Brewster Whitecaps of the play at the Stony Brook School from mid-June to early August.

Brewster was first settled in as a northeastern parish of the town of . The town separated from Harwich as the northern, more wealthy parish of Harwich in 1693, and was officially incorporated as its own town in . Brewster was named in honor of Elder William Brewster, the first religious leader of the Pilgrims at Plymouth Colony. The town's history grew around Stony Brook, where the first water-powered grist and woolen mill in the country was founded in the late 1600s. There were also many other rich sea captains in the town, who built many of the mansions and stately homes which now constitute the town's inns and bed-and-breakfasts. ["Cape Cod, Martha's Vineyard and Nantucket Street Atlas." South Easton, MA: Arrow Maps Inc., 2004, p 32.]

The town is bordered by extensive s to the north, along the shores of Cape Cod Bay. The town is also home to the Roland C. Nickerson State Forest Park, the largest state forest on Cape Cod. The town has several large ponds, especially along the Harwich town line. There are several brooks throughout the town, all of which lead to Cape Cod Bay. The bay is also home to several boat landings and beaches in the town.

and Route 6A pass through the town from east to west, and Routes 124 and 137 both have a northern terminus along Route 6A in town. Short portions of Routes 28 and 39 also pass through the southeastern corner of town (the portion of 28 is less than 100 yards long). Route 6 is a limited-access, two-lane, semi-divided highway, Brewster is accessed by exits 10,11, and 12. Route 6A (Main St.)from the Dennis line takes you east through the town center, and on towards Orleans; the other five highways are all surface roads.

There were 4,124 households out of which 25.7% had children under the age of 18 living with them, 57.9% were married couples living together, 8.9% had a female householder with no husband present, and 30.8% were non-families. 24.8% of all households were made up of individuals and 12.6% had someone living alone who was 65 years of age or older. The average household size was 2.34 and the average family size was 2.79.

Brewster is governed by the form of government, led by an executive secretary and a . The town has its own police and fire departments, headquartered together at the intersection of Routes 6A and 137. There is a single post office near the geographic center of town, as well as the Brewster Ladies' Library, a 50,000-volume library which is a part of the Cape Libraries Automated Materials Sharing (CLAMS) network. The Long Pond Medical Center, located just over the Harwich line at the intersection of Routes 6 and 137, serves the medical needs of the town, as well as the southeastern corner of the Cape.

Brewster is a member of the Nauset Regional School District, along with the towns of Eastham, Orleans and Wellfleet. The town operates the Stony Brook Elementary School, which serves students from kindergarten through second grade, and the Eddy Elementary School, which serves students in third through fifth grades. Middle School students attend Nauset Middle School in Orleans, and high school students attend Nauset Regional High School in North Eastham. There is also a public charter school available to middle school students from Brewster: The Cape Cod Lighthouse Charter School in Orleans.

Additionally, the town's high school students may attend Cape Cod Regional Technical High School in neighboring Harwich free of charge. There are also two private schools, The Family School and The Laurel School, both of which serve elementary students.

*In July 1888, , and her teacher, visited Brewster. In the photo, Helen is shown cradling a doll. The photograph was recently discovered almost 120 years after it was taken. The mother of the woman who provided the photograph used to play with Helen at the Elijah Cobb House.

Minnie Riperton's song, "Alone in Brewster Bay," references to the time she and her husband, producer Dick Rudolph, spent in the Cape Cod area in the early 1970s--prior to her 1975 smash hit single Lovin' You.

Mr Nickerson's shares in First National Bank of Chicago were sold according to the New York Times 9/29/1899 for $2.1M. The syndicate that purchased the shares included J.P. Morgan, E.H. Harriman & Marshall Field.

SM Nickerson was one of the most influential business leaders of the time.