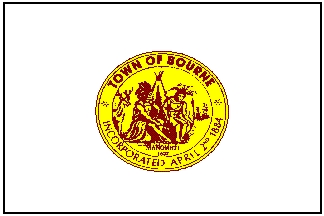 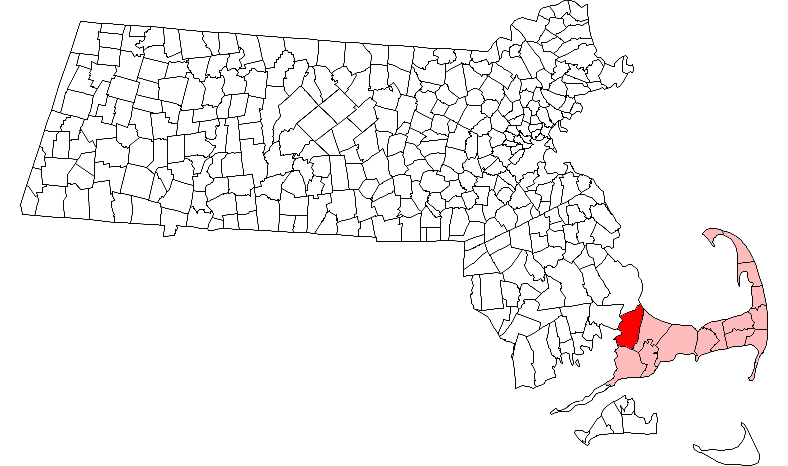 For geographic and demographic information on specific parts of the town of Bourne, please see the articles on Bourne (CDP), Buzzards Bay, Monument Beach, Pocasset, Sagamore, and Sagamore Beach.

Bourne was first settled in 1640 as a part of the town of Sandwich. It was officially incorporated in 1884 as the last town to be incorporated in Barnstable County. It was named for Richard Bourne, whose father, Richard Bourne, served in the Massachusetts General Court at the time of settlement, as well as helping to found the settlement in Mashpee. [Cape Cod, Martha's Vineyard and Nantucket Street Atlas. Easton, Mass.: Arrow Maps, Inc., 2004, p. 21.] The town lies at the northeast corner of Buzzards Bay, and is the site of Aptucxet Trading Post, the nation's oldest store. It was founded by the Pilgrims in 1627 at a site halfway between the two rivers which divided the Cape from the rest of the state. It was out of this location that the was formed, in order to save time and lives by eliminating the need to sail around the hazardous eastern shores of Cape Cod. Because of the canal, Bourne is now considered the "first" town on the Cape, as all three bridges (the Bourne, Sagamore and the all are located within the town. Also, due to the Canal, the town is divided, the majority of land lying on the Cape.

Bourne is also the site of the , a maritime college located at the southern mouth of the canal on the western shore. is also partially located in the town.

According to the , the town has a total area of 52.8 s (136.8 ), of which, 40.9 square miles (106.0 km²) of it is land and 11.9 square miles (30.8 km²) of it (22.53%) is water. Bourne is bordered by Sandwich to the east, Falmouth to the south, Buzzards Bay and Wareham to the west, and Plymouth and to the north. The town lies approximately twenty miles west of Barnstable, fifty-five miles south-southeast of Boston, and equidistantly from . The border with Plymouth and Wareham in Plymouth County constitutes the only landed border between Barnstable County and any other county (the borders with Dukes and Nantucket lie in ). Major localities of Bourne include Bournedale, Buzzards Bay, Cataumet, Monument Beach, Pocasset, and Sagamore, amongst others.

Bourne's geography was formed around its location on Buzzards Bay and the . There are several necks (the local term for a ) and islands along the shore, which create several small coves and harbors. There are also several small ponds and rivers, all of which (except the , which feeds directly into the Canal) feed into Buzzards Bay. The largest of these, , lies along the border with Wareham. Also, because of the large parcel of land occupied by Otis A.N.G.B., the majority of settlement is either along the shores of the Canal or along Buzzards Bay. There is also a small neighborhood (South Sagamore) located between the Canal and the northern boundaries of the base. The town also has a town forest and a small portion of the (which is located along Otis's northern boundary). There are also many beaches along its shores, mostly along Buzzards Bay (although Sagamore Beach lies along Cape Cod Bay).

There were 7,439 households out of which 28.2% had children under the age of 18 living with them, 54.6% were married couples living together, 9.4% had a female householder with no husband present, and 32.6% were non-families. 26.8% of all households were made up of individuals and 11.8% had someone living alone who was 65 years of age or older. The average household size was 2.39 and the average family size was 2.90.

Bourne is represented in the as a part of three separate districts, the Second Plymouth, Fifth Barnstable, and a third district which includes portions of Falmouth and Mashpee. The town is represented in the as a part of the Plymouth and Barnstable district, which includes Falmouth, Kingston, Pembroke, Plymouth, Plympton, Sandwich and portions of Barnstable. [ [http://www.mass.gov/legis/citytown.htm Index of Legislative Representation by City and Town, from Mass.gov] ] The town is home to the Seventh Barracks of Troop D of the . [ [http://www.mass.gov/?pageID=eopsterminal&L=5&L0=Home&L1=Law+Enforcement+%26+Criminal+Justice&L2=Law+Enforcement&L3=State+Police+Troops&L4=Troop+D&sid=Eeops&b=terminalcontent&f=msp_divisions_field_services_troops_troop_d_msp_field_troop_d_station_d7&csid=Eeops Station D-7, SP Bourne] ]

The town uses the form of government, which is led by a . The town hall, like the police station, lies on the mainland side of the Canal. There are four fire stations located throughout the town, and seven post offices for the town's eight s. The town's Jonathan Bourne Library is located near the Aptucxet Trading Post, just south of the Bourne Bridge, and is a member of the CLAMS (Cape Library Automated Materials Sharing) network.

Bourne operates its own school department, with five public schools in the town. There are three elementary schools, Ella F. Hoxie, James F. Peebles and the Otis Memorial Elementary School. All four serve grades one through four, with Otis being the only school to host kindergarten and pre-kindergarten classes. The town's middle school serves grades five through eight, and operates grades nine through twelve. The school's colors are purple and white, and their teams are the Canalmen and Lady Canalmen. Their logo includes the Railroad Bridge, one of the three bridges crossing the , and the only one that looks different from the other two. Bourne's chief rival is Wareham High School.

Bourne High School's sports teams have been very successful in the recent past, including state championships in boy's hockey and girl's volleyball. State finalists include girl's volleyball, golf, and boy's soccer. Conference championships have been won by boy's tennis, soccer, and football. The baseball team recently performed very well in the 2007 MIAA State Tournament, losing to Cape-rival Harwich in the South Finals. Bourne also perennially has an extremely successful ice hockey program.

Additionally, Bourne is home to the , located off Sandwich Road. The school serves Bourne, Falmouth and Sandwich on the Cape, as well as Wareham and Marion (off Cape). The town also has three private schools: Saint Margaret's Regional in Buzzards Bay, a Catholic school which serves grades K-8; The Bridgeview School in Sagamore, a private Montessori school serving Pre-K through 6th grades; and Beach Rose Waldorf School of Cape Cod, a Waldorf school located just south of the Bourne Bridge, serving grades Pre-K through 8. The , a state maritime college, is also located in Buzzards Bay at the western mouth of the Cape Cod Canal.

There are no interstate highways at all on Cape Cod. As such, the largest highways in Bourne are Route 3, , Route 25 and Route 28. Routes 6 and 28 enter the town multiplexed from Wareham, bypassing Buzzards Bay to the north. At the Buzzards Bay Rotary the two routes split. Route 6 goes straight ahead and assumes its old alignment as a four-lane highway along the north side of the , going through the village of Bournedale before becoming the Mid-Cape Highway, a four-lane limited-access highway beginning at the western approach to the . Sandwich Road, the road parallel to Route 6 running along the south side of the canal, was formerly signed as Route 6W. Currently it is an unsigned two-lane that is used as an alternate to Route 6. Sandwich Road becomes Route 6A east of the intersection with Cranberry Highway, a road that acts as a connector between Route 6A and Route 6 eastbound prior to the approach of the Sagamore Bridge. Route 28 splits off at the Buzzards Bay Rotary as a ramp headed to the Bourne Bridge and Route 25. Route 25's terminus is just prior to the northern approach of the where the highway continues as Route 28 south. At the southern end of the bridge is the Bourne Rotary, where Sandwich Road intersects. Route 28 continues past the rotary as a four-lane divided highway, officially known as McArthur Boulevard. At the Otis Rotary, the intersection with the road leading to the main gate to , Route 28A spurs off and heads towards Woods Hole in Falmouth. It is also at this point that the highway goes from being a surface road to a true limited-access highway. Route 3, also known as the Pilgrims Highway, ends at the junction of Route 6, just prior to the Sagamore Bridge. Up until 2006 the intersection was a rotary which caused daily traffic nightmares during the busy summer tourist season. The rotary was removed in 2007.

The third bridge over the Canal is the vertical lift railroad bridge, which brings the railroad to the Cape. Although traffic along this railroad line no longer reaches the lower Cape, as it originally did, it still brings rail traffic to the upper and mid-Cape. Freight rail service is provided by the . The operates seasonal tourist excursions from Hyannis to Sagamore, with occasional special excursions to Buzzards Bay village. The nearest inter-city () passenger rail stations are Providence and Boston's . Nearby are the Middleborough/Lakeville and Kingston/Route 3 stations of the MBTA's commuter rail system, providing direct service to Boston.

There are no public air facilities in town; the town is roughly equidistantly located between the Plymouth and Barnstable municipal airports. The nearest national and international airport is in Boston. Additionally, there are ferry services to the islands in neighboring Falmouth.