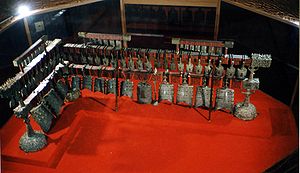 Bianzhong of Marquis Yi of Zeng, dated 433 BC.

Bianzhong (simplified Chinese: 编钟; traditional Chinese: 編鐘; pinyin: biān zhōng, pronounced [pi̯ɛ́n t͡ʂʊ́ŋ]) is an ancient Chinese musical instrument consisting of a set of bronze bells, played melodically. These sets of chime bells were used as polyphonic musical instruments and some of these bells have been dated at between 2,000 to 3,600 years old. They were hung in a wooden frame and struck with a mallet. Along with the stone chimes called bianqing, they were an important instrument in China's ritual and court music going back to ancient times.

Several sets of bianzhong were imported to the Korean court during the Song Dynasty. Known in Korea as pyeonjong, the instrument is still used in Korean court music. A similar instrument in Japan is called the hensho.

Among the most important sets of Bianzhong discovered are a complete ceremonial set of 65 zhong bells, found in a near-perfect state of preservation during the excavation of the tomb of Marquis Yi, who died ca. 430 BCE. Yi was ruler of Zeng, one of the Warring States which at the time of his death was under control of the Chǔ state. This region is now part of the present-day Hubei province.

Although tuned bells have been created and used for musical performance in many cultures, zhong are unique among all other types of cast bells in several respects. They have a lens-shaped (rather than circular) section, the bell mouth has a distinctive "cutaway" profile, and the outer surfaces of the large bells feature 36 studs or bosses, symmetrically placed around the body in four groups of nine. This special shape gives zhong bells the remarkable ability to produce two different musical tones, depending on where they are struck. The interval between these notes on each bell is either a major or minor third, equivalent to a distance of four or five notes on a piano[1]. 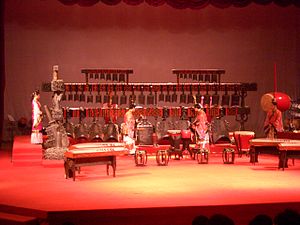 The bells of Marquis Yi — which are still fully playable after almost 2,500 years — cover a range of slightly less than five octaves but thanks to their twin-tone capability, the set can sound a complete 12-tone scale—predating the development of the European 12-tone system by some 2000 years—and can play melodies in diatonic and pentatonic scales[2].

As the image above shows, the bianzhong chimes of Marquis Yi are mounted on intersecting racks set at 90 degrees to each other, consisting of two pairs of massive wooden beams, with three smaller beams (carrying the highest bells) mounted on top of the upper beams. The beams are separated and supported at their ends and intersections by six bronze human figurines with upraised arms and wearing swords; the upper three figures are slightly smaller than the lower, which are cast on their own elaborately decorated bronze pedestals. The ends and intersection of each pair of beams are fitted with decorated bronze caps and front part of the brackets supporting the largest bells are cast in the shape of animals. The longer pair of main beams are provided with extra support in the middle in the form of two slender bronze columns.

These bells usually have inscriptions on them from which scholars used as references for studying ancient Chinese writings (also known as Bronzeware script). Another related ancient Chinese musical instrument is called qing (磬 pinyin qing4) but it was made of stone instead of metal.