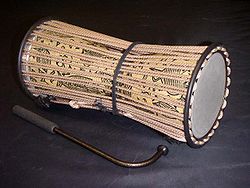 The talking drum is a West African, hourglass-shaped drum whose pitch can be regulated to mimic the tone and prosody of human speech. Other speech-mimicking drums of conical or tubular construction exist around Africa, but they are generally known by their particular names instead of the term "talking drum". Examples include the Mande Dunun, Sangban and Kenkeni drums, the Akan Fontomfrom and the Bantu Ngoma.

An ancient talking drum from India is known as idakka.

Hourglass shaped talking drums are some of the oldest instruments used by West African griots and their history can be traced back to the Ghana Empire. The Hausa people (and by influence, the Yoruba people of south western Nigeria and Benin and the Dagomba of northern Ghana) have developed a highly sophisticated genre of griot music centering on the talking drum. Many variants of the talking drum exist, with essentially the same construction mentioned above. Interestingly, this construction is limited to within the contemporary borders of West Africa, with exceptions to this rule being northern Cameroon and western Chad; areas which have shared populations belonging to groups predominant in their bordering West African countries, such as the Kanuri, Djerma, Fulani and Hausa.

The use of talking drums as a form of communication was noticed by Europeans in the first half of the eighteenth century. Detailed messages could be sent from one village to the next faster than could be carried by a person riding a horse. In the nineteenth century Roger T. Clarke, a missionary, realised that "the signals represent the tones of the syllables of conventional phrases of a traditional and highly poetic character."[1] Like Mandarin and Cantonese the African languages were tonal, that is the pitch is important in determining the meaning of a particular word.[2][3] The problem was how could complex messages be communicated without the use of vowels or consonants and simply using tone? An English emigrant to Africa, John F. Carrington, in his 1949 book The Talking Drums of Africa explained how African drummers were able to communicate complex messages over vast distances.[4] He found that to each short word which was beaten on the drums was added an extra phrase, which would be redundant in speech but provided context to the core drum signal.

would be translated by the drummers as

The extra phrases provide a context in which to make sense of the basic message or drum beats. The extra drum beats reduce the ambiguity of the meaning. The irony was that by the time the West understood the mechanism of the drums they began to diminish in use in Africa.

Various sizes of hourglass talking drum exist, with the dimensions of the drum differing between ethnic groups, but all following the same template.

The Tama of the Wolof and Mandinka peoples is typified by its smaller dimensions, having a total drum length typical of 13 centimeters (5 inches) with a 7 centimeter (2.75 inch) drum head diameter. This produces a much higher pitched tone than other talking drums of the same construction.

The Yoruba and Dagomba peoples on the other hand have some of the largest dimensions for drums in their Lunna and Dùndún ensembles, with a length typical of 23-38 centimeters (9-15 inches) and a drum head diameter of between 10-18 centimeters (4-7 inches). In Yoruba talking-drum ensembles, this is used alongside smaller talking drums similar to the Tama, called Gangan in Yoruba language. 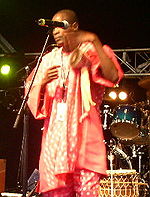 Playing styles are closely linked with the drum's construction and the tonal qualities of each language. There is a clear difference in playing styles between areas with predominantly Fulani and Mande-speaking populations and traditionally non-Mande areas further east.

The predominant style of playing in areas further west such as Senegal, Gambia, western Mali and Guinea is characterized by rapid rolls and short bursts of sound between the stick holding hand and accompanying free hand, and correlates with the various pitch accent and non-tonal languages heard in this area. This is a style typically heard in the popular Mbalax genre of Senegal.

From eastern Mali, Burkina Faso and Ghana, towards Niger, western-Chad and Nigeria, (with the exceptions of areas with Fulani and Mande-speaking majorities) the playing style of the talking drum is centered on producing long and sustained notes by hitting the drum head with the stick-holding hand and the accompanying free hand used to dampen and change tones immediately after being hit. This produces a rubbery sounding texture to its playing, which mimics the heavy and complex tones used in languages from this area (see Niger–Congo tonal language chart). This characteristic style can be clearly heard in the popular music of this area, particularly in those where the talking drum is the lead instrument, such as Fuji music of the Yoruba of Nigeria.

Use in popular music

In the 20th century the talking drum became a part of popular music in West Africa. It is used in playing Mbalax music of Senegal and in Fuji and Jùjú music of Nigeria (where it is known as a dùndún, not to be confused with the dundun bass drum of the Mandé peoples.)

King Crimson used the talking drum on their album,"Lark's Tongues in Aspic". For the track "The Talking Drum"[citation needed]

Tom Waits has used the talking drum on his song "Trouble's Braids," a track from the album Swordfishtrombones.

Erykah Badu used the talking drum on her song "My People", from the album New Amerykah Part One (4th World War).

Sikiru Adepoju, is a master of the talking drum from Nigeria who has collaborated with artists from the Grateful Dead to Stevie Wonder and Carlos Santana.

Naná Vasconcelos, master of percussion, started playing the talking drum in the early 80's and has used it ever since.

In the game series Patapon the player is a god who communicates with his or her followers using four Talking Drums. Each has its own unique sound: 'Pata,' 'Pon,' 'Don' and 'Chaka.'

In the television series Dead Like Me, the talking drum is discussed as a means of celebrating the lives of the dead.

In some ethnic groups, each individual was given a drum name. Examples from among the Bulu of Cameroon are "Even if you dress up finely, love is the only thing" or "The giant wood rat has no child, the house rat has no child". Talking drum players sent messages by drumming the recipient's name, followed by the sender's name and the message.[6]