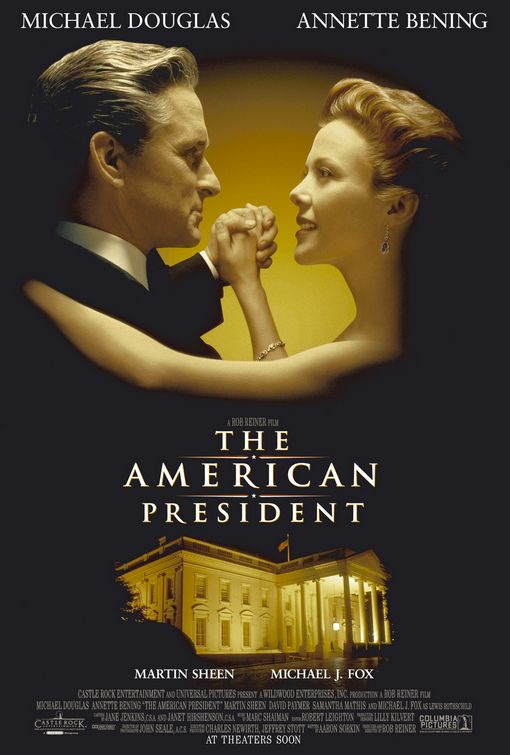 "The American President" is a 1995 directed by and written by . It stars , , , and . In the film, President Andrew Shepherd (Douglas) is a widower who pursues a relationship with attractive Sydney Ellen Wade (Bening) — who has just moved to Washington, D.C. — while at the same time attempting to win passage of a crime control bill.

Shepherd is introduced as an immensely popular Democratic president from the state of preparing to run for re-election with a 63% approval rating. The President and his staff, led by Chief of Staff A.J. MacInerney (Sheen), attempt to consolidate the administration's high by passing a moderate crime control bill. The difficulty is that support for the bill is not very strong. Conservatives and Republicans don't want the bill at all, and liberals and Democrats think the bill is too weak. If the bill passes, President Shepherd's re-election is a shoo-in.

The President of France is also about to arrive on a state visit to the United States, presenting the leader of the free world with the awkward predicament of having to find a partner to accompany him to the . Shepherd's wife has been dead for three years prior to the movie's start. The President's cousin, with whom he had planned on attending, is ill.

The President's attention soon focuses on the attractive Sydney Ellen Wade (Bening), who has just moved to Washington, D.C. to work for an environmental lobby in the attempt to persuade the President to pass legislation committing his Administration to substantially reduce carbon dioxide emissions. During their first meeting, Shepherd and Wade are immediately intrigued by each other, and Shepherd invites Wade to the state dinner.

At the same meeting, Shepherd strikes a deal with Wade: if she can secure a certain number of votes for the environmental bill, he will deliver the rest. Whatever his personal feelings towards Wade, he expresses this to his staff, especially the pragmatic A.J., as a sound political move. He believes Wade will not be able to get enough votes to meet her obligation, thus releasing Shepherd who will be seen to have tried, without being blamed for failing.

During the state dinner, as well as subsequent occasions (during which Shepherd acts as pursuer), the couple fall in love. The relationship, as well as Shepherd's politicking down the middle, results in a decline in his popularity. The decline is spurred by relentless attacks by presidential hopeful, U.S. Senate Minority Leader, Bob Rumson (Dreyfuss). The attacks focus on Wade's activist past, an attack on Shepherd's , and the President's refusal to respond to Republican attacks (although the plot is perhaps vague on the attacks to which Shepherd won't respond). The President's precarious situation is exacerbated by the impending failure of his crime bill.

Eventually Wade does manage to get enough votes to meet her part of the deal. Before she can tell Shepherd, he discovers that three Congressmen from Michigan are willing to deliver their votes if he shelves the environmental bill. As he is exactly three votes short, with no other apparent options to acquire them, he agrees, betraying Wade, who is fired, then breaks up with him.

The film builds to a climax timed to coincide with the State of the Union, planned as a conciliatory, non-partisan event. However, ruminating on Wade leaving him and his sacrifice of a bill he believes in for the sake of a bill he doesn't really believe will have much effect, Shepherd has a change of heart.

He makes a surprise appearance in the White House press room to rebut the Republican attacks on his values and character, and then sends the controversial environmental bill to Congress, promising that he will write a stronger crime bill in due time, and fight for that as well. His passionate defense of what he believes, in contrast with his earlier moderate conciliation, galvanizes the press room and his staff. His speech writer Rothschild (Fox) has only half an hour to re-write the State of the Union speech to reflect the new, confrontational tone of the administration - yet seems happy about the challenge. Wade comes back to him, arriving in the Oval Office just before he leaves for the Hill leading to a reconciliation.

The movie ends with Shepherd entering the House to rapturous applause.

Influence on "The West Wing"

The screenplay was written by , and inspired many aspects of his television drama "The West Wing". The two productions follow the staff of a largely idealized , and like many of Sorkin's projects share liberal ideologies. Even the set of the in "The American President" was later used in "The West Wing" (and was also used for the film "Nixon").

The movie's influence can be seen most clearly in early episodes of "The West Wing"; some dialogue from the two are nearly identical. Sorkin has been known to say that much of the first season was actually taken from material he edited out of the first draft of "The American President"'s script. Sorkin was accused of lifting ideas from an earlier screenplay by , which was denied by the WGA.

One of the issues touched on in the film and developed in the series relates to gun control bills, developed in "." More significant is the issue of a "proportional response" to military attacks on American assets abroad. In "The American President," Andrew Shepherd finds himself in the Situation Room having to order such an attack. He muses for a single line "Someday, someone's gonna have to explain to me the virtue of a proportional response," before giving the order. In "", President Bartlet finds himself in similar circumstances and, seated in the White House situation room with his own National Security Council asks: "What is the virtue of a proportional response?"

The Global Defense Council, the fictional environmental lobby where Sydney Wade worked, is also featured in the "West Wing" episode called "," and is often referred to in other episodes.

In "The American President," Sydney Ellen Wade is ultimately fired from her lobbyist position because the president has brokered a deal that causes her legislative effort to fail. Similarly, in the final episode of the third season of "The West Wing," Deputy Chief of Staff uses the same tactic and ends up getting fired from her position at the Women's Leadership Conference. Josh and Amy are dating when this takes place, just as the main characters are here.

Several actors from "The American President" reappear in "The West Wing", including as President , as National Security Advisor Dr. , as , as Ellie Bartlet, and as Congressman Mark Richardson.

The film was mainly a production of , with as a silent partner. Universal distributed the film internationally outside the U.S. while handled domestic distribution on behalf of Castle Rock. After 's acquisition of (which owned Castle Rock), the film became part of the / library, although it is technically held by Turner while Warner Bros. is responsible for sales and distribution, and Columbia continued to hold US distribution rights until 1999. Meanwhile, Universal continues to hold the international rights.

Many political topics are touched on in this film, including:
*
*
* ACLU membership
*
*