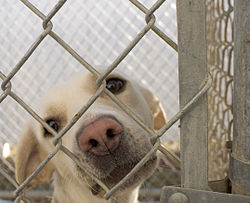 A mixed breed dog at an animal shelter.

Pet adoption usually refers to the process of taking guardianship of and responsibility for a pet that a previous owner has abandoned or released to a shelter or rescue organization. Common sources for adoptable pets are 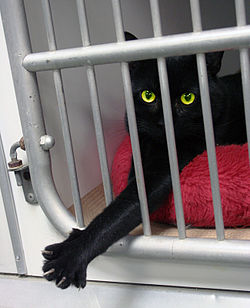 A cat waiting to be adopted

Pets are taken to animal shelters for many reasons.

People deal with their unwanted pets in many ways. Some people have the pet euthanized (also known as putting it down or putting it to sleep), although many veterinarians do not consider this to be an ethical use of their resources for young and healthy animals, while others argue that euthanasia is a more humane option than leaving a pet in a cage for very long periods of time. Other people simply release the pet into the wild or otherwise abandon it, with the expectation that it will be able to take care of itself or that it will be found and adopted. More often, these pets succumb to hunger, weather, traffic, or common and treatable health problems. Some people euthanize pets because of terminal illnesses or injuries, while others even do it for common health problems that they cannot, or will not, pay for treating. More responsible owners will take the pet to a shelter, or call a rescue organization, where it will be cared for properly until a home can be found. Homes cannot always be found, however, and euthanasia is often used for the excess animals to make room for newer pets, unless the place has a no-kill policy. The Humane Society of the United States estimates that 3-4 million dogs and cats are euthanized each year in the US because of a lack of homes.[1] Animal protection advocates urge people to spay or neuter their pets and to adopt instead of buying animals in order to reduce the number of animals who have to be euthanized.

To help lower the number of animals euthanized, some shelters have developed a no-kill policy. These shelters keep their animals as long as it takes to find them new homes. City shelters rarely have this policy because of the large number of animals they receive. No-kill shelters are usually run by groups that have volunteers or individuals with enough space to foster pets until a permanent home can be found. However, many of these groups and individuals have a finite number of spaces available. This means they will not take in new animals unless a space opens up, although they will often take back pets that they have adopted out previously. Sometimes they try to find the dogs foster homes, in which the dog is placed in a home temporarily until someone adopts the pet.

The central issue in adoption is whether a new owner can provide a safe, secure, permanent home for the pet. Responsible shelters, pounds, and rescue organizations refuse to supply animals to people whom they judge unable to supply the animal with a suitable home. Sometimes, a new owner may face training or behavioral challenges with a pet who has been neglected, abused, or left untrained. In the vast majority of cases, patience, training, and consistency of care will help the pet overcome its past.

One problem shelters are fighting to overcome is what they term "Big Black Dog syndrome". Big black dogs (BBDs) are consistently the hardest dogs to place — even if they’re friendly, well trained, and in perfect health. This may be due to a number of factors, including fear stigma against certain breed types, attraction to ads and the fact that black dogs often do not photograph as well as lighter coated ones, and the fact that black dogs are often portrayed as aggressive in film and on television. Organizations have started campaigns to educate the public about BBD syndrome. Similarly, shelters often have difficulty placing black cats due to common superstitions regarding black cats as bringers or harbingers of bad luck. Some shelters also have policies halting or limiting adoption of black cats immediately prior to Halloween for fear that the animals will be tortured, or used as "living decorations" for the holiday and then abandoned.[2]