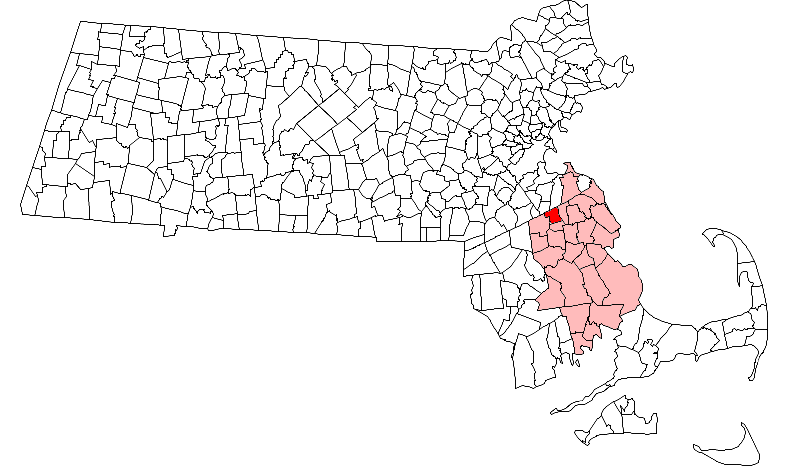 Abington was first settled by European settlers in 1668. The lands included the current towns of Bridgewater, Rockland, Whitman and parts of Hanover. The town was officially incorporated in 1712, having been named six years earlier by Governor , as a tribute to Anne Venables Bertie, Countess of Abington, England, who helped him secure the governorship of the Colony from Queen Anne.

During the nineteenth and early twentieth century,the manufacture of boots and shoes was its primary industry, with nearly half of the footwear provided for the Union Army during the Civil War being provided by Abington factories. In 1874 and 1875, the towns of Rockland and Whitman, respectively, separated and incorporated as towns. In 1893, the town was the site of a riot between town constables and workers from the New York, New Haven & Hartford Railroad, over the town's rights to build a streetcar line that crossed the railroad's tracks. The town eventually built the line, and as a "peace offering," the railroad built the North Abington Depot building, which was built in the style of . [ [http://www.abingtonhistory.org/Abington-overview.html Abington Historical Commission: Abington's Nationally Registered History] ]

Abington ranks 308th of 351 communities in the Commonwealth, and is the fourth-smallest town (behind Hull, Whitman and Rockland) in Plymouth County. Abington is bordered by Holbrook to the northwest, Weymouth to the northeast, Rockland to the east, Whitman to the south, and Brockton to the west. Abington is considered to be an inland town of the South Shore, and is located approximately twenty miles south of Boston.

Abington has two major waterways; the to the west provides the town's border with Brockton, and the Beaver Brook runs through the eastern part of town, and was the source of much of the water power used by the shoe factories. In the northwestern corner of town lies , a large forested area around Cleveland Pond. Much of the town's population is centered on the eastern side of town, closer to the former town geographic center. The northeast corner of town is also the site of portions of the runways of the South Weymouth Naval Air Station, which was closed in 1996 as a part of the fourth round of BRAC base closures.

There were 5,263 households out of which 34.8% had children under the age of 18 living with them, 57.0% were married couples living together, 10.2% had a female householder with no husband present, and 28.8% were non-families. 23.0% of all households were made up of individuals and 9.2% had someone living alone who was 65 years of age or older. The average household size was 2.74 and the average family size was 3.29.

Abington is governed by the form of government, and is led by a town manager and a . The town operates its own police and fire department, with firehouses located in the north and south of town along Route 18. There are two post offices in town, on Route 123 east of Route 18 and on Route 58 north of Route 139. The Abington Public Library, a member of the Old Colony Library Network, is located adjacent to the town hall, both of which opened in 1997 across from the high school. The town operates a park, Island Grove Park, located in the southeast of town.

Abington has its own school department for the town's approximately 2,300 students. The Abington Early Childhood Center, located near the center of town, serves students from pre-kindergarten through second grade. There are three elementary schools (Center Elementary near the old town center, North Elementary in North Abington, and Woodsdale Elementary near the Ames Nowell State Forest), which serve students from third through sixth grades. The Charles M. Frolio Junior High School is located near the center of town, and serves seventh and eighth grade students. Abington High School is located just west of Route 18, across the street from the Town Hall and library. Abington's colors are green, white and previously gold, and their teams are known as the Green Wave. The school's chief rival is Whitman-Hanson Regional High, whom they play in an annual football game.

High school students may also choose to attend in Hanover free of charge. Abington is also home to Saint Bridget School, a Catholic along Route 58, which serves students from through eighth grade. There are other private schools nearby, located in the neighboring towns of Brockton and Weymouth.

There are two main north-south routes through town, Route 18 and Route 58, the latter terminating at the former just a half-mile north of the town line. Route 123 and Route 139 run east to west through the town, with Route 139 being the more northern route. There is no freeway access to town; the town is located between Route 24 and Route 3.

The former Old Colony Railroad line runs through the eastern part of town, and is currently used as a part of the Kingston-Route 3 route of the MBTA's commuter rail line. There is a stop in Abington, just southwest of the intersection of Routes 123 and 58. A spur off the line formerly went into the town of Rockland; that spur is now abandoned. There is no air service in the town; the nearest national and international air service can be found at in Boston.

Local newspapers: [http://www.thepatriotledger.com The Patriot Ledger] and [http://www.enterprise.com The Enterprise]