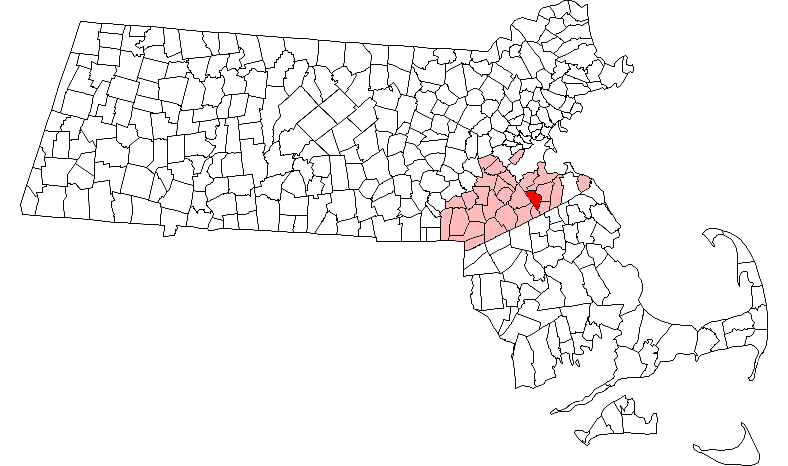 It was called Cochaticquom by the local Cochato and Ponkapoag tribes. The town was incorporated in 1793 from what was formerly the south precinct of the town of Braintree. It is a widely-held assumption that Randolph was named after , first president of the .

Randolph was formerly the home of several large shoe companies. Many popular styles were made exclusively in Randolph, including the "Randies". At the time of Randolph's incorporation in 1793, local farmers were making shoes and boots to augment household incomes from subsistence farming. In the next half , this sideline had become the town's major , attracting workers from across , and and later from and , each adding to the quality of life in the town. By 1850, Randolph had become one of the nation's leading boot producers, shipping boots as far away as and .

The decline of the shoe industry at the beginning of the led to Randolph's evolution as a suburban residential community. Boot and shoe making has been supplanted by and service industries. The town's proximity to major transportation networks has resulted in an influx of families from and other localities who live in Randolph but work throughout the metropolitan area.

The inspiration for the nationally observed "smoke-out day" came from Randolph High School Guidance councilor Arthur Mullaney, who observed in a 1969 discussion with students that he could send all of them to college if he had a nickel for every cigarette butt he found on the ground. This touched off an effort by the Randolph HS class of 1970, supported by the Randolph Rotary Club, to have local smokers give it up for a day and put the savings toward a college scholarship fund. Smoke out day went national in 1976. [http://www.cancer.org/docroot/PED/content/PED_10_5_Great_American_Smokeout_History.asp]

Randolph is home to three s:

Randolph is located at coor dms|42|10|24|N|71|2|56|W|city (42.173417, -71.049124).GR|1 Located fifteen miles south of Boston, at the intersection of Routes 128 and 24, Randolph's location has been an important factor in its economic and social history.Randolph is located in Eastern Massachusetts, bordered by and on the north, Braintree and
Holbrook on the east, Canton on the west, and Avon and on the southand southwest. Randolph is 15 miles south of and 211 miles from .

Randolph is situated in the , which has excellent rail, air, and highway facilities. State Route 128 and Interstate Route 495 divide the region into inner and outer zones, which are connected by numerous "spokes" providing direct access to the airport, port, and intermodal facilities of .

The , a Reliever (RL) facility, is easily accessible. It has 2 asphalt runways 4,001'x 150' and 4,007'x 150'. Instrument approaches available: Non-precision. However the majority of Randolph residents use for Air transportation.

Randolph is governed by a five-member executive body, the , and a representative legislative body, Town Meeting. Selectmen appoint an Executive Secretary, who is responsible for the day-to-day management of the Town.

Selectmen meet twice a month, on the first and third Mondays, at 7:30pm.

Pre-elementary education (kindergarten) is provided at the respective home schools, the Charles G. Devine Early Childhood Center having been closed in 2007. As part of the Blue Hills Regional School District, Randolph students entering the ninth grade may opt to attend the , commonly referred to as "Blue Hills" or the Norfolk County Agricultural School, known as "Aggie," instead of Randolph High School. The school system is run by the School Committee.