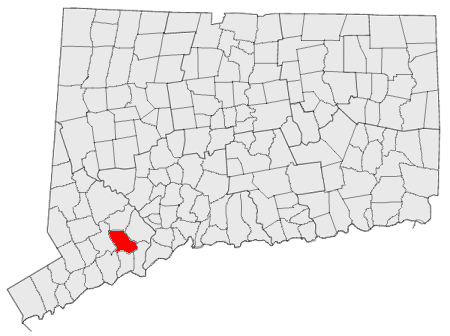 Trumbull was settled by the English as a part of the town of Stratford, in 1639. By May 15, 1656, the Court of the in Hartford, established Stratford's boundary to include all of the territory twelve miles inland from , between the and the Fairfield town line. This included all of present-day Trumbull, Shelton and Monroe. By 1661 and 1662, Stratford selectmen Lt. Joseph Judson, Captain Joseph Hawley and John Minor, had completed deeds of transfer with the for most of the land that comprises present-day Trumbull. The Nichols area located in the southeastern part of Trumbull, was settled first. The farmers built houses and barns along the Farm Highway, establishing a new village separate from Stratford. These large farms extended east and west for a considerable distance, sometimes a mile. The Ephraim Hawley house, built in 1683, is built on land granted to Captain Joseph Hawley in 1673, this farm was commonly called Captain's Farm in 1696. Land records also show that in 1688, John Curtiss gifted his farm, called Mischa Hill, to his son Benjamin. Zachariah Curtiss built his house and one-story barn before 1696 on his own land grant and on land gifted to him by his father Captain William Curtiss at his farm commonly called Old Farm. In 1699, Ebenezer Curtiss received a land grant near Lt. Joseph Judson's farm, at that time, Judson's farm was owned by Abraham Nichols. Lt. Joseph Judson removed from Stratford in 1673 for religious reasons and founded the town of Woodbury.

In 1725, the families residing at Mischa Hill, desiring to have their own meeting house, were given permission to form their own Parish called Unity and in 1730 they established the Unity Congregational Church. Others began settling the areas of Trumbull now called Chestnut Hill, Stratfield, Trumbull Center, Long Hill, and Tashua. In 1744, the Parish of Unity and the Long Hill Parish of the Stratfield section of Stratford, asked permission to combine and become the Society of North Stratford. The General Assembly in Hartford referred to the eastern boundaries of Unity at that time as ancient when they approved the new town in 1744. The name of the town changed to Trumbull in 1797 when the town was incorporated and local government was established. The new town was named after who served as an advisor to General during the and became Connecticut's first governor.

Huldah Hawley was born February 23, 1755 and died June 27, 1856, at the age of 101. The widow of Chauncey Beardsley, Huldah took pleasure in talking of the exciting times of the Revolution and related during her lifetime about the time that two companies of French soldiers, under the command of French General , encamped a whole winter during the on what is now known as Mountain Hill, a high rocky bluff in the central part of the Village of Nichols Farm's. In December, 1780 two dozen horsemen deserted and discharged themselves from their winter quarters in Lebanon and fled into the woods. This high rocky bluff, at the time, commanded a view of for seventy miles and was used to spy on British ships. Hawley said the soldiers would compel her to cook for them and she furnished provisions for them through fear that they would kill her. From June 28 to June 30, 1781, during the American Revolutionary War, units of the French army, called Lauzun's Legion, encamped overnight in present day Abraham Nichols Park. The Legion was commanded by Colonel -Biron, duc de Lauzun and was sent ten to fifteen miles ahead to protect the flank of the main French army marching in the south to reinforce American troops under the command of General at the . French coins have since been found near the site of their camp in Abraham Nichols Park.

There were 11,911 households out of which 37.5% had children under the age of 18 living within them, 71.7% were married couples living together, 7.4% had a female householder with no husband present, and 18.5% were non-families. 16.2% of all households were made up of individuals and 9.6% had someone living alone who was 65 years of age or older. The average household size was 2.82 and the average family size was 3.17.

Route 8 runs through the southeast part of town. Route 8 is a freeway that leads to and I-84, and continues into as and finally terminates in .

Route 25 runs north to south, merging with Route 8 at the line and continues overlapped with Route 8 (commonly known as the Route 8/25 connector) into Bridgeport ending at Interstate 95. Continuing north on Route 25, the freeway ends as it crosses Route 111 and continues as a surface road towards I-84 in Newtown leading to .

Route 15, also known as the , goes north (east) to (eventually connecting to ) and south (west) towards . Route 15 runs along the southern part of town.

Route 127, also known as White Plains Road and Church Hill Road, runs through the town center from south to north from the East Side of Bridgeport. The section in Trumbull was completed to Pulpit Rock in 1705. Route 127 ends at the intersection of (Main Street) Route 111 at the Town Hall.

Route 111, also known as Main Street in Trumbull and Bridgeport, also runs north to south. Continuing north on Route 111, the road crosses Route 25 and eventually heads into Monroe, terminating at Route 34. Main Street continues south past Route 15 (where it is exit 48 from Route 15) and past Westfield Shopping Town Trumbull into the North End of Bridgeport.

Route 108, also known as Nichols Avenue and Huntington Turnpike, heads north into southeastern Trumbull from Stratford at Hawley Lane. The section in Trumbull was completed in 1696 and is considered by some to be the third oldest documented highway in Connecticut [http://www.kurumi.com/roads/ct/ct-chrono.html] . It terminates in Shelton at the intersection with Route 110 (Howe Avenue). Route 108 can be reached via exit 52 from Route 15 or exit 8 from Route 8.

The Tashua section of town features the Tashua Recreation Facility, which is by far the largest at 268 acres in size and includes basketball and tennis courts, an adult and a children's swimming pool, playground, picnic area and multi-purpose field. Additionally it is also the site of Tashua Knolls, an 18 hole golf course built in 1976 and designed by noted golf architect Al Zikorus. The course features a driving range, two putting greens, pro shop, locker rooms, The Eagle's Nest Grille and a banquet facility. There is also Tashua Glen, a 9 hole "Executive style" course opened in 2004. Both courses feature cart paths. There is a Men's Club, Senior Men's Club, Ladies 9-holer, and Ladies 18-holer organizations active at the course.

The Trumbull Community Women is a group dedicated to promoting civic service. It is open to all women over 18, and runs a Young Women's Club as well. They meet at the Trumbull Library Community Room, generally on the first Tuesday of the month September through June.

The Trumbull Library can be found adjacent to Town Hall at 33 Quality Street and also operates the Fairchild-Nichols Memorial Library at 1718 Huntington Turnpike.

The Town Hall Gazebo is host to concerts most summer Tuesday nights.

The Trumbull Historical Society was founded in 1964, and maintain a museum of Trumbull's past at 1856 Huntington Turnpike on the site of the first settlement by Abraham Nichols.

The Trumbull Teen Center is located at the barn at Indian Ledge Park and features activities such as air hockey, foosball, local band concerts, ping pong and basketball.

The Trumbull Senior's Center is located at 23 Priscilla Place. The senior transportation department continues to provide effective door-to-door services to seniors age 60 and over with out transportation or unable to drive. Services include doctor’ s appointments, shopping, nutrition program, dentist appointments and legal appointments. It provides a variety of resources such as Continuing Education and Social Services as well as activities.

Plasko's Farm is very popular in the Fall for their corn maze and fresh produce.