Cosmological connections and differences in worldview distinguish "traditional knowledge" from "local knowledge". Social scientists often place knowledge within a naturalistic framework, and emphasize the gradation of recent knowledge into knowledge acquired over many generations. These accounts use terms like "adaptively acquired knowledge", "socially constructed knowledge," and other terms that emphasize the social aspects of knowledge. Local knowledge and traditional knowledge may be thought of as distinguished by the length of time they have existed - decades to centuries versus millennia. A large number of scholarly studies in the naturalistic tradition demonstrate that traditional knowledge is not a natural category, and may reflect power struggles and relationships for land, resources and social control than adherence to a claimed ancestry or heritage.

Traditional knowledge, on the other hand, may be perceived very differently by indigenous and local communities themselves. The knowledge of indigenous and local communities is often embedded in a cosmology, and the distinction between "intangible" knowledge and physical things is often blurred. Indigenous peoples often say that "our knowledge is holistic, and cannot be separated from our lands and resources". Traditional knowledge in these cosmologies is inextricably bound to ancestors, and ancestral lands. Knowledge may not be acquired by naturalistic trial and error, but through direct revelation through conversations with "the creator", spirits, or ancestors. As Chamberlin (2003) writes of a Gitksan elder from British Columbia confronted by a government land claim: "If this is your land," he asked, "where are your stories?"

Indigenous and local communities often do not have strong traditions of ownership over knowledge that resemble the modern forms of private ownership. Many have clear traditions of custodianship over knowledge, and customary law may guide who may use different kinds of knowledge at particular times and places, and obligations that accompany the use of knowledge. From their perspective, misappropriation and misuse of knowledge may be offensive to traditions, and may have spiritual and physical repercussions in their cosmological systems. Subsequently, indigenous and local communities argue that others' use of their traditional knowledge warrants respect and sensitivity. Critics of "traditional knowledge", however, maintain that such demands for "respect" are really an attempt to prevent unsubstantiated beliefs from being subjected to the same scrutiny as other knowledge claims. This has particular significance for environmental management because the spiritual component of "traditional knowledge" can be used to justify any activity, including the unsustainable harvesting of resources. 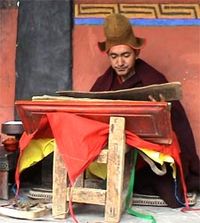 Recently, international attention has turned to intellectual property laws to preserve, protect, and promote their traditional knowledge. The reasons for this are complex. In 1992, the Convention on Biological Diversity (CBD) recognized the value of traditional knowledge in protecting species, ecosystems and landscapes, and incorporated language regulating access to it and its use (discussed below). It soon became apparent that implementing these provisions would require that international intellectual property agreements would need to be revised to accommodate them.

This became even more pressing with the adoption of the World Trade Organization Agreement on Trade-Related Aspects of Intellectual Property Rights (TRIPs), which established rules for creating and protecting intellectual property that could be interpreted to contradict the agreements made under the CBD. In response, the states who had ratified the CBD requested the World Intellectual Property Organization (WIPO) to investigate the relationship between intellectual property rights, biodiversity and traditional knowledge. WIPO began this work with a fact finding mission in 1999. Considering the issues involved with biodiversity and the broader issues in TRIPs (involving all forms of cultural expressions, not just those associated with biodiversity - including traditional designs, music, songs, stories, etc.), WIPO established the Intergovernmental Committee on Intellectual Property and Genetic Resources, Traditional Knowledge and Folklore (IGC-GRTKF).

The period of the early 1990s to the Millennium was also characterized by the rapid rise in global civil society. The high-level Brundtland Report (1987) recommended a change in development policy that allowed for direct community participation and respected local rights and aspirations. Indigenous peoples and others had successfully petitioned the United Nations to establish a Working Group on Indigenous Populations that made two early surveys on treaty rights and land rights. These led to a greater public and governmental recognition of indigenous land and resource rights, and the need to address the issue of collective human rights, as distinct from the individual rights of existing human rights law.

The collective human rights of indigenous and local communities has been increasingly recognized - such as in the International Labor Organization (ILO) Convention 169 (1989) and the Declaration on the Rights of Indigenous Peoples (2007). The Rio Declaration (1992), endorsed by the presidents and ministers of the majority of the countries of the world, recognized indigenous and local communities as distinct groups with special concerns that should be addressed by states. 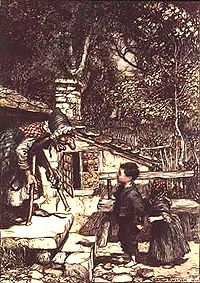 Hansel and Gretel is a fairy tale of Germanic origin, recorded by the Brothers Grimm in 1812. The tale has been adapted to various media, most notably the opera Hänsel und Gretel (1893) by Engelbert Humperdinck and a stop-motion animated feature film based on the opera. Artwork by Arthur Rackham, 1909

Literary and artistic works based upon, derived from or inspired by traditional culture or folklore may incorporate new elements or expressions. Hence these works may be "new" works with a living and identifiable creator, or creators. Such contemporary works may include a new interpretation, arrangement, adaptation or collection of pre-existing cultural heritage that is in the public domain. Traditional culture or folklore may also be "repackaged" in digital formats, or restoration and colorization. Contemporary and tradition based expressions and works of traditional culture are generally protected under existing copyright law, a form of intellectual property law, as they are sufficiently original to be regarded as "new" upon publication. Once the intellectual property rights afforded to these new works of traditional knowledge expire, they fall into the public domain.[2]

Indigenous intellectual property is an umbrella legal term used in national and international forums to identify indigenous peoples' special rights to claim (from within their own laws) all that their indigenous groups know now, have known, or will know.[3] It is a concept that has developed out of a predominantly western legal tradition, and has most recently been promoted by the World Intellectual Property Organisation, as part of a more general United Nations push [4] to see the diverse wealth of this world's indigenous, intangible cultural heritage better valued and better protected against probable, ongoing misappropriation and misuse.[5]

In the lead up to and during the United Nations International Year for the World's Indigenous Peoples (1993)[6] then during the following United Nations Decade of the World's Indigenous Peoples (1995–2004)[4] a number of conferences of both indigenous and non-indigenous specialists were held in different parts of the world, resulting in a number of declarations and statements identifying, explaining, refining, and defining 'indigenous intellectual property'.[7][8]

Article 27. 3(b) of the Agreement on Trade-Related Aspects of Intellectual Property Rights (TRIPs) sets out certain conditions under which certain biological materials or intellectual innovations may be excluded from patenting. The Article also contains a requirement that Article 27 be reviewed. In the TRIPs-related Doha Declaration of 2001, Paragraph 19 expanded the review to a review of Article 27 and the rest of the TRIPs agreement to include the relationship between the TRIPS Agreement and the 1992 Convention on Biological Diversity (CBD) and the protection of traditional knowledge and folklore.

The Convention on Biological Diversity (CBD)

The Convention on Biological Diversity (CBD), signed at the United Nations Conference on Environment and Development (UNCED) in 1992, was the first international environmental convention to develop measures for the use and protection of traditional knowledge, related to the conservation and sustainable use of biodiversity. By 2006, 188 had ratified the Convention and agreed to be bound by its provisions, the largest number of nations to accede to any existing treaty (the United States is one of the few countries that has signed, but not ratified, the CBD). Significant provisions include:

The interpretation of these provisions has been elaborated through decisions by the parties (ratifiers of the Convention) (see the Convention on Biological Diversity Handbook, available free in digital format from the Secretariat).

The parties to the Convention set a 2010 target to negotiate an international legally-binding regime on access and benefit sharing (ABS) at the Eighth meeting (COP8), 20–31 March 2006 in Curitiba, Brazil. The ABS negotiations will address inter-governmental obligations related to genetic resources, and these will involve measures related to the rights of indigenous and local communities to control access to and derive benefits from the use of genetic resources and associated traditional knowledge.

At the Convention on Biological Diversity meeting, in Buenos Aires, in 1996, emphasis is put on local knowledge. Key players, such as local communities and indigenous peoples, must be recognized by States, and given back their sovereignty over the biodiversity of their territories, so that they can continue protecting it.[9]

The Creative Commons, with its roots in the open software movement, the literary arts, the open access movement in science and the humanities, and in the media, arts, entertainment and communications communities, has also proposed that traditional knowledge is an essential and public source of cultural creativity. Part of the debate involves the question of whether or not traditional knowledge is part of the public sphere, national commons, or global commons as part of a "common heritage of mankind". There is no common indigenous and local community position on issues of the "common heritage of mankind" or the "global public good". Indigenous peoples and local communities have shared much of their knowledge and resources with the global community and many have traditions of sharing. Healers, in general, have spiritual obligations to heal the sick and have shared their healing knowledge. Indigenous peoples have strong traditions of reciprocity, that is people's informal exchange of goods and labour. Much of the historical appropriation and use of traditional knowledge has not occurred with reciprocity. Though traditional knowledge and resources have made contributions to the welfare of humankind as the basis of much of the world's food system and naturally-derived medicines.[citation needed]

In 2001, Government of India, set up the Traditional Knowledge Digital Library (TKDL) as repository of 1200 formulations of various systems of Indian medicine, such as Ayurveda, Unani and Siddha and 1500 Yoga postures (asanas), translated into five languages — English, German, French, Spanish and Japanese.[10][11] India has also signed agreements with the European Patent Office (EPO), United Kingdom Trademark & Patent Office (UKPTO) and the United States Patent and Trademark Office to reduce commercialization of traditional medicines by giving patent examiners at International Patent Offices access to the TKDL database for patent search and examinations purposes.[11][12][13]

IPR Policy of Kerala Govt.(India) - Intellectual Property Rights (IPRs) Policy for Kerala released in 2008 [14], proposes adoption of the concepts ‘knowledge commons’ and ‘commons licence’ for the protection traditional knowledge. The chief architects of the Policy are Prof. Prabhat Patnaik and Mr. R.S. Praveen Raj. The policy advises to put all the traditional knowledge to the realm of “knowledge commons” and not to public domain. While codification of TK in digital libraries and sharing the same with patent offices is a viable solution to direct misappropriation, it is feared that it may provide an opportunity for capitalists to effect private appropriation by making cosmetic improvements on such traditional knowledge that is not accessible otherwise as confidentiality cannot be maintained by patent Offices when TKDL is treated as prior art - says R.S. Praveen Raj [15]