There Will Be No Leave Today

There Will Be No Leave Today

Infobox Film | name = There Will Be No Leave Today 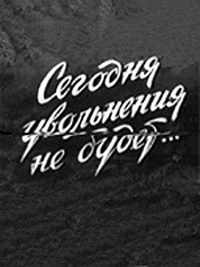 "There Will be No Leave Today" ( _ru. Сегодня увольнения не будет, "Sevodnya uvolnyeniya nye budyet") is a 1959 student film by the n film director and his fellow student Aleksandr Gordon. The film is about members of the Soviet army during a time of peace. It was Tarkovsky's second film, produced while being a student at the State Institute of Cinematography (VGIK).

In an unnamed town construction workers find an old cache of bombs of . An army unit is dispatched to dispose the bombs. As exploding the bombs would inflict heavy damage on the town the army unit has to transport the bombs in a risky mission manually to a safe site.

After the entire town is evacuated, the soldiers carry the bombs one by one to the safe site. Some of the bombs nearly explode, and in one scene an heroic soldier grabs a bomb and jumps from a truck to save the other soldiers. The film ends with the popoulation returning to the town and the simultaneous explosion of the bombs at the safe site.

Untypically for Tarkovsky the film resembles a Soviet propaganda film, with heroic soldiers and the grateful population of the town. Contrary to Tarkovsky's other student film "The Killers", this film had a relatively high budget. The budget was partly provided by Soviet television as the film was to be aired on the anniversary day of the capitulation of in . The higher budget allowed for professional actors in the main roles, such as , and . Furthermore, the army provided some support in the form of military equipment and troops as extras. The film was shot in over a period of three months. Editing took another three months. [cite web
last = Blasco
first = Gonzalo
authorlink =
coauthors =
title = An Interview with Marina Tarkovskaia and Alexander Gordon
work =
publisher = www.andreitarkovski.org
date = November 10, 2003
url = http://www.ucalgary.ca/~tstronds/nostalghia.com/TheTopics/Marina_and_Alexandr.html
format =
doi =
accessdate = 2007-12-10 ]