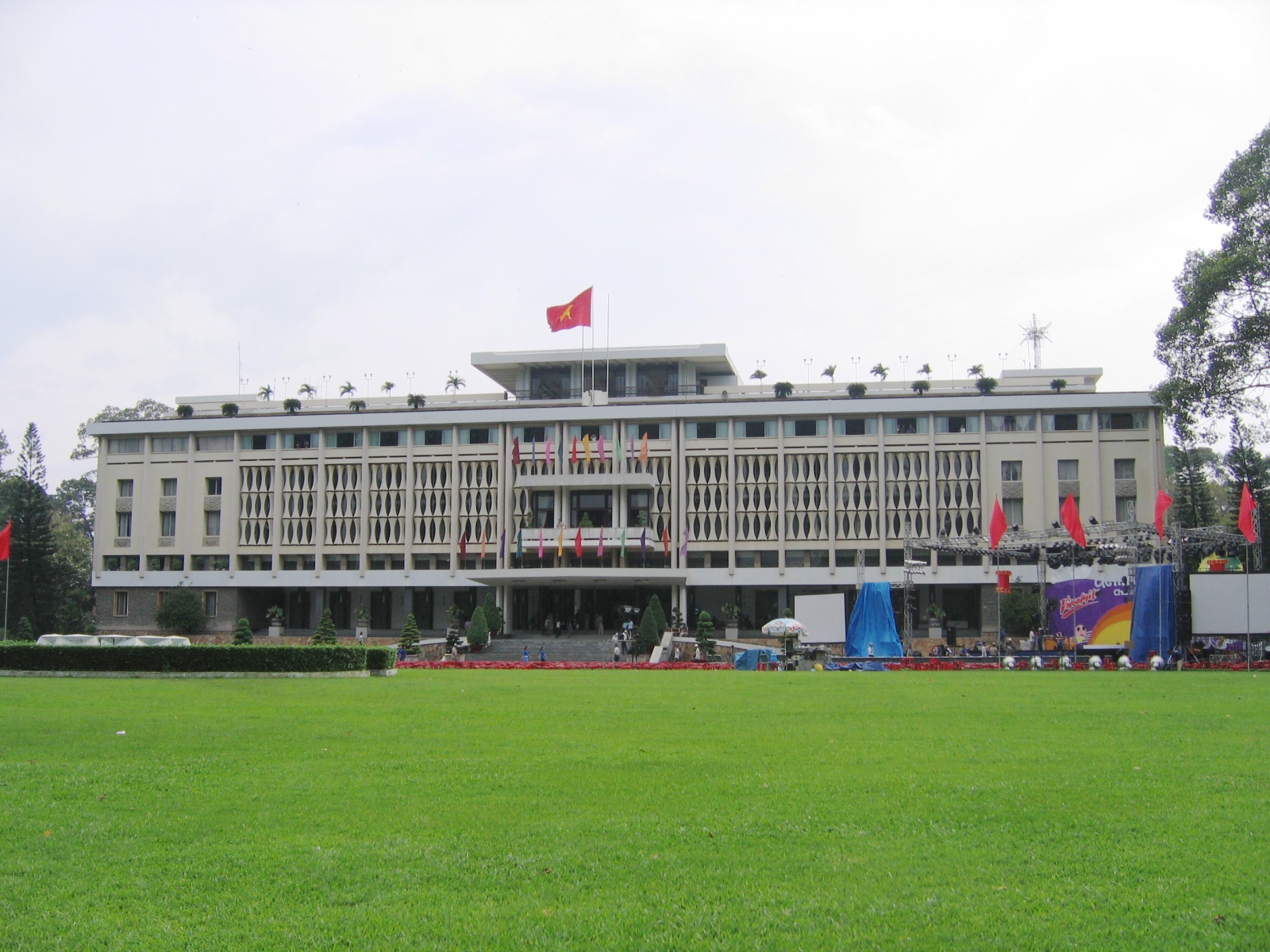 Reunification Palace ( _vi. Dinh Thống Nhất) formerly known as Independence Palace ("Dinh Độc Lập") built on the site of the former Norodom Palace, is a historic landmark in , . It was designed by architect as the home and workplace of the President of during the and the site of the official handover of power during the on , . It was then known as Independence Palace, and an NVA tank crashed through its gates, as recorded by Neil Davis. [http://users.hunterlink.net.au/~ddwkl/neildavis.html]

In , launched the first attack in , starting its invasion of Vietnam. In , France completed its conquest of (), including (, , , , , and ). To consolidate the newly established colony in Cochinchina, on 23 February , Lagrandière, Governor of Cochinchina, held the first building stone ceremony to start the construction of a new palace to replace the the old wooden palace built in 1863. The new palace was designed by Hermite, who was also the architect of Hong Kong City Hall. That first cubic stone, measuring 50 cm along each edge, with holes containing French gold and silver coins with 's effigy, came from .

The building covered an area of 12 hectares, including a palace with the façade of 80 meters in width, a guest-chamber capable of accommodating 800 persons, with surrounding gardens covered by green trees and grasses. Most of the building materials were inported from France. Owing to the of 1870, the construction got behind schedule. Not until 1873 was this palace completed. The palace was named Norodom Palace after the then king of (King (1834-1904). The avenue in front of the palace bore the same name. From 1871 to 1887, the palace was for the use of the French Governor of Cochinchina ("Gouverneur de la Cochinchine"); therefore, it was referred to as Governor's Palace. From 1887 to 1945, all Governors-General of French Indochina used this palace as their residence and office. The office of the Cochinchinese Governors was relocated to a nearby villa.

On , France surrendered to the after its defeat in the . France agreed to sign the Geneva Accords and withdrew its troops from Vietnam. According to the accords, Vietnam would be divided for two years until 1956 with the as the temporary border line when a vote based on would be held to establish a unified Vietnamese government. North Vietnam was under the control of a communist government, the , while South Vietnam was under the anti-communist . On 7 September 1954, Norodom Palace was handed over to the prime minister of the Republic of Vietnam and a representative of the French government, general .

In 1955, Ngô Đình Diệm overthrew , the head of the Republic of Vietnam in a (or ). Ngô Đình Diệm became president of the Republic of Vietnam and renamed the Norodom Palace Independence Hall. From this time this palace became the presidential palace. According to belief, this palace is located in a dragon's head; therefore, it was also referred to as Dragon's Head Palace.

On 27 February 1962, two pilots of the and flew two (A-1D/AD-6 version) aircraft and bombed the Hall in what was known as . As a result almost the whole left wing of the Hall was destroyed. Considering that it was almost impossible to restore the Hall, Diệm ordered it removed and rebuilt a new one on the site of the original palace. The new palace was constructed according to the design by , a Vietnamese architect who won the First Grand Prize of Rome () in 1955, the highest recognition of the Beaux-Arts school in Paris. He was also a laureate of the Rome Architecture Award.

The construction of the new Independence Hall started on 1 July 1962. Meanwhile, Ngô Đình Diệm moved to (today this is the ). But Ngô Đình Diệm had no chance to see the completed hall as he and his brother were assassinated in a by the opposition alliance on 2 November 1963. The completed hall was inaugurated on 31 October 1966 and was chaired by the chairman of the National Leadership Committee, . The Independence Hall became the presidential palace again and was Thieu's home and office from October 1967 to 21 April 1975.

On 8 April 1975, Nguyen Thanh Trung, a pilot of the (but in fact he was a communist spy) flew an aircraft, originating from , and bombed the Hall but caused no significant damage. At 10:45 am 1975, a tank of the hit the main gate, ending the .

In November 1975, after the negotiation convention between the communist North Vietnam and communist South Vietnam was successful, in memory of that event, the Provisional Government of the renamed the hall Reunification Hall (“Hội trường Thống Nhất”).