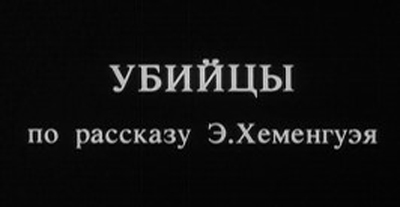 "The Killers" ( _ru. Убийцы, "Ubiitsy") is a 1956 student film by the n film director and his fellow students Marika Beiku and Aleksandr Gordon. It is based on the short story by , written in 1927. It was Tarkovsky's first film, produced while being a student at the State Institute of Cinematography (VGIK).

"The Killers" is an adaption of a short story by . The story was divided into three parts, with the first being directed by Gordon, and the second and third part being directed by Beiku and Tarkovsky. The first part shows Nick Adams (Yuli Fait) observing two gangster (Valentin Vinogradov and Boris Novikov) in black coats and with black hats entering a small-town diner. They tell the owner of the diner George (Aleksandr Gordon), that they are searching for the boxer Ole Andreson and that they want to kill him. The tie Nick Adams and the cook up and wait for some time for Ole Andreson to appear. Three customers enter the restaurant, but are send away by the owner George. One of the customers is played by Tarkovsky, who whistles "".

Students were required to work on films in groups of two or threes due to a lack of equipment at the film school VGIK. Andrei Tarkovsky and Aleksandr Gordon asked Marika Beiku to work with them. The idea for adapting 's short story was Tarkovsky's. All roles were played by students of the VGIK, and the camera and lighting was handled by fellow students Alfredo Álvarez and Aleksandr Rybin.

Beiku, Gordon and Tarkovsky set up an American bar in the studio of the film school, at this time a symbol of depravity and becoming a little attraction among students. Props were brought by students from their home, and from relatives and friends. The film was praised by , the professor and teacher of Beiku, Gordon and Tarkovsky. [cite web
last = Gordon
first = Alexander
authorlink =
coauthors =
title = Student Years
work =
publisher =
date = 1990
url = http://www.acs.ucalgary.ca/~tstronds/nostalghia.com/TheTopics/Gordon_On.html
format =
doi =
accessdate = 2007-12-10 ]

*The Killers (short story by )