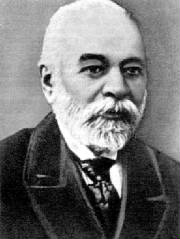 Ismail Kemal Bej Vlora or commonly Ismail Qemali Audio|Ismail Qemali.ogg|listen (, - , ) was a distinguished leader of the Albanian national movement, founder of the modern Albanian state and its first head of state and government.

He was born in to a noble family. Having finished the primary education in his hometown, and the gymnasium "Zosimea" in , in 1859 he moved to where he participated in the efforts for the standardization of the Albanian alphabet and the establishment of an Albanian cultural association. He was imparted important functions in the Ottoman administration and was distinguished personality for his liberal views. Qemali's demands for democratic reforms pushed him into a conflict with the conservatist circles in Istanbul. The sentenced him to internment, and amnestied after a 7-year suffering.

He was a principal figure in the declaration of independence and the formation of an independent government of Albania in , . This signaled the end of almost 500 years of Ottoman rule in Albania. Together with and , he raised the flag on the balcony of two-story building in Vlorë. He was prime minister of Albania from 1912 to 1914.