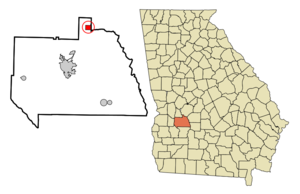 Andersonville is part of the Americus Micropolitan Statistical Area.

Andersonville, originally named Anderson, Georgia, was given the name Andersonville by the United States Postal Service to prevent confusion with another city, also named Anderson. Andersonville is infamous as an Union POW camp, . The town, though very sparsely populated, was in existence before the establishment of the prison camp at the site. A small base known as Civil War village was established for visitors and Confederate soldiers. This former stockade has since become a small town. After the civil war the Andersonville POW camp evolved into a small town with its own hotel, post office and restaurant. Later the was established as a memorial to the POWs who died at the camp. There is also a small museum to display how the town was founded and the involvement with the site of the Andersonville POW camp.

There were 124 households out of which 34.7% had children under the age of 18 living with them, 46.0% were married couples living together, 17.7% had a female householder with no husband present, and 30.6% were non-families. 26.6% of all households were made up of individuals and 10.5% had someone living alone who was 65 years of age or older. The average household size was 2.67 and the average family size was 3.21.