Jerome Bonaparte Chaffee (April 17, 1825 – March 9, 1886) was an entrepreneur and United States Senator from Colorado. Chaffee County, Colorado is named after him.

He was born in Cambria, Niagara County, New York. He moved to Adrian, Michigan in 1844 and worked as a teacher until starting a dry goods business in the late 1840s. In 1852 he moved to St. Joseph, Missouri, and later to Elmwood, Kansas Territory where he started banking businesses and engaged in land speculation. 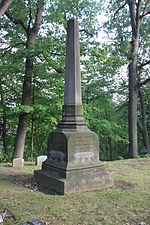 In 1860 he moved to Colorado to invest in mining. He was one of the founders of the City of Denver, Colorado, and founded the First National Bank of Denver in 1865. Chaffee entered politics and helped organize the Colorado Territory, serving in its first legislature as speaker. He was the territorial delegate to the United States Congress starting in 1870.

In 1876, after Colorado was admitted to the Union, Chaffee was elected to the United States Senate. He served for the duration of his term, until 1879, but did not seek reelection due to poor health.

In 1884, Chaffee was elected state chairman of the Colorado Republican Party.