The Scottish Midland Co-operative Society Limited, trading as Scotmid Co-operative, is an independent retail consumers' co-operative which originated in the Scottish Midlands, particularly Edinburgh and the Lothians. It was formed in 1981 by a merger of the Dalziel Society of Motherwell with the St. Cuthbert's Co-operative Society which had been established in 1859. With over 5,000 staff, the chain now has nearly 200 supermarkets and five perfume shops in Scotland, and over 140 Semichem health and beauty shops throughout Scotland and Northern Ireland, and parts of England[3]

Like most retail consumers' co-operatives in the UK, ScotMid is incorporated as an Industrial and Provident Society, regulated by the Financial Services Authority.[4] 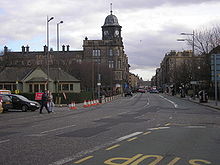 According to Edinburgh City Council, the former co-operative building at the west end of Great Junction Street has a distinctive domed octagonal clock tower, forming a major landmark.[5]

In 1968, Leith Provident's[6] 1911 department store on Great Junction Street was still operating a then unusual overhead wire system that transported a customer's payment and dividend number from the sales assistant to the cashier, returning change and receipt.[7][8]

In 2000, Scotmid closed all 20 of its non-food department stores, which had made losses for five successive years.[11]

Scotmid added Dundas Fyfe funeral directors to its funeral operation. The head office moved from Fountainbridge, Edinburgh, where it had been since 1859, to a new purpose-built office near Newbridge.

The Fragrance House was founded by Scotmid in 2009. It specializes in perfume and by 2011 had five stores in Scotland with plans to expand to England and Northern Ireland.[14]

Morning Noon & Night was a Scottish convenience store chain set up in Dundee in 1991, by retailing executive Eddie Thompson (who became chairman of Dundee United F.C. in 2002.) It operated morning, noon and night.

This allowed Scotmid to add the 50 Morning, Noon & Night stores to its portfolio letting it expand into areas of Scotland, such as the Highlands, where it didn't previously have any stores.[16]

Botterills Convenience Stores was a Scottish convenience store founded in Blantyre, South Lanarkshire in the 1950s by the Botterill family. Trading under the name of "Botterills of Blantyre" and latterly under the SPAR banner, it ranked 19th in The Grocers Top 50 independent grocery retailers.[17] Owner Jim Botterill sold his 51 stores to Scotmid in November 2010 for an undisclosed sum, enabling Scotmid to extend its territory south and west.[18]