Cities in the Great Depression

Cities in the Great Depression

Throughout the industrial world, cities in the Great Depression were hit hard, beginning in 1929 and lasting through most of the 1930s. Worst hit were ports (as world trade fell) and cities dependent on heavy industry, such as steel and automobiles. Service-oriented cities were less hurt. Political centers such as Washington, D.C., London and Berlin flourished during the Great Depression as the expanded role of government added many new jobs.

In Germany, the depression had reached its worst in 1932, with 6 million unemployed, spread throughout every city. From 1928 to 1932 unemployment in Berlin soared from 133,000 to 600,000. In Hamburg, a port city, the numbers went from 32,000 to 135,000. In Dortmund, in the Ruhr industrial region, it went from 12,000 to 65,000. Berlin verged on political chaos as Communist and Nazi paramilitary forces fought for control of the streets. Overall the Nazis were weakest in the largest cities, which were controlled by Socialist and Communist parties (and in Catholic areas, the Center party).

America's larger cities in the 1920s enjoyed strong growth. With the end of large-scale immigration, populations stabilized and the plentiful jobs in the cities pulled families upwards in terms of social mobility. Investment in office buildings, stores, factories, utilities, streets, and, especially, apartments and single-family homes, added substantially to the infrastructure, supported a very even better times were ahead. After 1929, the optimism ebbed away, overwhelmed by a deepening pessimism that made long-term private investment seem inadvisable.

The Depression's damage to large cities, suburbs, towns and rural areas varied according to the economic base. Most serious in larger cities was the collapse of the construction industry with new starts falling to less than 10% of the norm of the late 1920s. Although much needed work was deferred, maintenance and repair of existing structures comprised over a third of the private sector construction budget in the 1930s. Devastating was the disappearance of 2 million high paying jobs in the construction trades, plus the loss of profits and rents that humbled many thousands of landlords and real estate investors.

Second came the general downturn in industry, especially heavy manufacturing. Steel in Pittsburgh, Pennsylvania, and Gary, Indiana, and automobiles in Detroit took the heaviest hits, along with railroads and coal mining. In these sectors, the largest cities suffered somewhat less than smaller mill towns, mining camps and railroad centers. Unemployment was a problem everywhere, but it was less severe among women than men, among workers in nondurable industries (such as food and clothing), in services and sales, and in government jobs. A sharp educational gradient meant that the less skilled inner city men had much higher unemployment rates than the high-school and college educated men who lived in outer zones and suburbs.

Although suburbia stopped growing, it did not suffer nearly as much as the central cities. While some unemployed came to the cities looking for relief (especially African Americans), it appears that even larger numbers of unemployed returned to family farms. For the first time ever, the movement of native population was away from cities and toward rural America.

The fiscal soundness of city and county governments was challenged by the rise in relief expenditures and the sharp fall in tax collections. The Hoover Administration had encouraged state and local government to expand public works projects, which they did in 1930 and 1931. While this expansion may have slowed the rise in unemployment, the spending was a luxury that could not be borne in the face of falling tax revenues and the unwillingness of investors to put more money into municipal bonds. After 1933, new sales taxes and infusions of federal money helped relieve the fiscal distress.

While local relief before 1932 focused on providing small sums of cash or baskets of food and coal for the neediest, the federal programs launched by Hoover and greatly expanded by the New Deal tried to use massive construction projects with prevailing wages to jumpstart the economy and solve the unemployment crisis. ERA, FERA, WPA and PWA built and repaired the public infrastructure in dramatic fashion but did little to foster the recovery of the private sector. In sharp contrast to Britain, where private housing construction pulled the country out of depression, American cities saw little private construction or investment, and so they languished in the economic doldrums even as their parks, sewers, airports and municipal buildings were enhanced. The problem in retrospect was that the New Deal's investment in the public infrastructure had only a small "multiplier" effect, in contrast to the high multiplier for jobs that private investment might have created.[1]

Franklin Delano Roosevelt had a magnetic appeal to the city dwellers—he brought relief and recognition of their ethnic leaders and ward bosses, as well as labor unions. Taxpayers, small business and the middle class voted for Roosevelt in 1936 but turned sharply against him after the recession of 1937-38 seemed to belie his promises of recovery. Roosevelt's New Deal Coalition discovered an entirely new use for city machines in his three reelection campaigns of the New Deal and the Second World War. Traditionally, local bosses minimized turnout so as to guarantee reliable control of their wards and legislative districts. To carry the electoral college, however, Roosevelt needed to carry the entire state, and thus needed massive majorities in the largest cities to overcome the hostility of suburbs and towns.

With Harry Hopkins his majordomo, Roosevelt used the WPA as a national political machine. Men on relief could get WPA jobs regardless of their politics, but hundreds of thousands of well-paid supervisory jobs were given to the local Democratic machines. The 3.5 million voters on relief payrolls during the 1936 election cast 82% of their ballots for Roosevelt. The vibrant labor unions, heavily based in the cities, likewise did their utmost for their benefactor, voting 80% for him, as did Irish, Italian and Jewish voters. In all, the nation's 106 cities over 100,000 population voted 70% for FDR in 1936, compared to his 59% elsewhere. Roosevelt won reelection in 1940 thanks to the cities. In the North, the cities over 100,000 gave Roosevelt 60% of their votes, while the rest of the North favored Willkie 52%-48%. It was just enough to provide the critical electoral college margin. With the start of full-scale war mobilization in the summer of 1940, the cities revived. The new war economy pumped massive investments into new factories and funded round-the-clock munitions production, guaranteeing a job to anyone who showed up at the factory gate.[2]

The American mafia and some other organized crime syndicates, which had emerged during Prohibition, gained power during the Depression years. Those mob figures that had not been shut down by the authorities often already ran powerful business empires and, though the declining economy severely challenged them, the desperation of the unemployed and underemployed working class often increased their power and influence. Casinos, brothels, and other vice industries thrived as city officials often looked the other way rather than hurt businesses that were actually succeeding.

Some to thrive during the Depression because of the economic activity generated by criminal enterprises. Atlantic City, long an established resort town, struggled during the Depression but managed to maintain a strong economy in large part due to illegal gambling activities. Galveston, Texas was one of the most successful examples; the island city, run by the Maceo syndicate, became a major resort town due to its lavish, illegal casino districts enabled by a corrupt law enforcement environment (unemployment there was virtually unheard of). The small, desert town of Las Vegas, Nevada began to develop based on vice businesses during this period with the added advantage that laws there were much less strict. 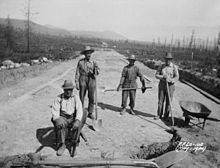 Canada's economy at the time was just starting to shift from primary industry (agriculture, farming, fishing, mining, logging) to manufacturing. Exports of raw materials plunged, and employment, prices and profits fell in every sector. Canada was the worst-hit (after the United States) because of its economic position. It was further affected as its main trading partner (until 1942) was England, followed by (and eventually becoming) the United States, both of which were badly affected by the Great Depression.

The hardest-hit cities were in the heavy industry centers of Southern Ontario and those of the Prairie Provinces, where much of Canada's productive farmland and manufacturing centers were (and still are) located. They included Hamilton, Ontario (Canada's largest steel center, analogous to Pittsburgh or Allentown), Toronto, Tilbury, Ontario, and Windsor, Ontario, an automotive manufacturing center, analogous to its larger neighbour, Detroit. Windsor also took a devastating blow, being a general manufacturing center, and home to auto manufacturers, much like its larger neighbour, Detroit, Michigan. In Ontario, unemployment skyrocketed to roughly 45%. Much like in the United States, the Government of Ontario decided to start numerous Public Works projects (such as highways, dams, bridges, and tunnels) in order to employ construction workers and pump money into the economy. By 1937, the province's unemployment levels began to recede towards their pre-crash levels. It was during this time that the Queen Elizabeth Way, Highway 2A (which would later become Highway 401), and the routes of today's 400-Series Highways were set. During this time, Highway 7 was also paved by hand and man-power from Peterborough, Ontario to Ottawa, Ontario, through some of Southern Ontario's roughest terrain. The Province of Ontario used manpower whenever possible, to employ as many people as it could. In Kingston, Ontario an unemployment relief camp on Barriefield lower common was set up under the command of the Commandant of the Royal Military College of Canada. Public works projects at the Royal Military College of Canada included rebuilding the dry stone wall and moat of Fort Frederick; the physics building extension, the connection from the Fort Frederick Dormitory to the new Yeo mess building, the new wing of the hospital, a new garage, roadwork, levelling the grounds at RMC for new football fields and a new running track.[3]

The Prairie Provinces and Western Canada were the hardest-hit; they fully recovered after 1939. The fall of wheat prices drove many farmers to the towns and cities, such as Calgary, Alberta, Regina, Saskatchewan, and Brandon, Manitoba.

The American Smoot Hawley Tariff Act, passed on June 17, 1930, hurt every export sector and led to Canadian retaliation and closer ties to the British Empire.

The Federal Government initially refused to offer large-scale aid or relief to the provinces, much to the anger of provincial premiers, but it eventually gave in and started a Canadian "New Deal" type of relief by 1935. By 1937, the worst of the Depression had passed, but it left its mark on the country's economic landscape. Atlantic Canada was especially hard hit. Newfoundland (an independent dominion at the time) was bankrupt economically and politically and gave up responsible government by reverting to direct British control.

The public at large lost faith in both the Liberal Party of Canada and the Conservative Party of Canada. This caused the rise of a third party: the Cooperative Commonwealth Federation (a socialist party that achieved some success before joining the Canadian Labour Congress in 1961, becoming the New Democratic Party).