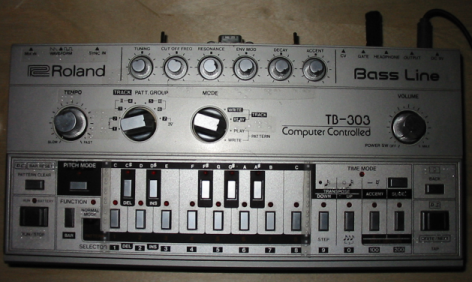 The Roland TB-303 Bass Line is a with built-in sequencer manufactured by the from to that had a defining role in the development of contemporary .

The TB-303 (named for " Bass") was originally marketed to guitarists for bass while practicing alone. Production lasted approximately 18 months, resulting in only 10,000 units. It was not until the mid- to late- that DJs and electronic musicians in found a use for the machine in the context of the newly developing genre.

's "" is widely acknowledged to have been the first recording to incorporate prototypical TB-303 sounds. Earlier recordings featuring the TB-303 can be traced back as far as the early Electro scene, including artists such as , Newcleus, and Mantronix, as well as pop musicians such as and .

The well-known "acid" sound is typically produced by playing a repeating note pattern on the TB-303, while altering the filter's , , and . The TB-303's accent control modifies a note's volume, filter resonance, and envelope modulation, allowing further variations in . A distortion effect, either by using a guitar or overdriving the input of an , is commonly used to give the TB-303 a denser, noisier timbre--as the resulting sound is much richer in .

The head designer of the TB-303, , was also responsible for leading design of the TR-909 .

The TB-303 has a single audio , which may be configured to produce either a or a . The square wave is in fact created by flipping every other cycle of the sawtooth wave upside down, giving it a specific, more hollow, sound a bit different from regular square waves Fact|date=December 2007. It also includes a simple , with a decay control only. A is also included, with -18 dB per attenuation, and controls for cutoff frequency, resonance, and envelope modulation parameters. Whilst not unique, the choice of a 3 pole design for the filter is somewhat uncommon, the standard configuration in analog synthesizers is almost always a 2 or 4 pole design. This, coupled with the way the filter modulations are bipolar, make the 303 sound difficult to exactly clone on hardware not specifically designed for that purpose.

The TB-303 sequencer has some unique features that contribute to its characteristic sound. During the programming of a sequence, the user can determine whether a note should be accented, and whether it should employ , a smooth transition to the following note. The portamento circuitry employs a fixed slide time, meaning that whatever the interval between notes, the time taken to reach the correct pitch is always the same. The accent circuitry, as well as increasing the amplitude of a note, also emphasizes the filter's cutoff and resonance, resulting in a distinctive, hollow "wow" sound at higher resonance settings. Roland referred to this as "gimmick" circuitry.

The instrument also features a 'simple' step-time method for entering note data into the 16-step programmable sequencer. This was notoriously difficult to use, and would often result in entering a different sequence than the one that had been intended. Some users also take advantage of a low voltage , wherein patterns that are programmed in memory get completely scrambled if the batteries are removed for a time.

There have been many modifications designed for the TB-303 such as the "Devilfish", "Acidlab" and "Borg" modifications. These generally provide additional parameters to the player, or offer alterations to the overall timbre.

Around the middle of the 1990s, demand for the TB-303 surged within the electronic dance music scene. As there were never many TB-303s to begin with, many small synthesizer companies cropped up and started to develop their own TB-303 hardware clones. This new wave of TB-303 clones began with a company called , who released their portable Bass Station keyboard in 1994. Many other TB-303 "clones" followed, including Future Retro's 777, Syntecno's TeeBee, 's , and MAM's Freebass FB-383. As the popularity of these new TB-303 clones grew, Roland, the original TB-303 manufacturer, finally took notice and released their own TB-303 "clone" in 1996, the Groovebox. Despite Roland's efforts, their new "303 clone" was an entirely new product that had almost nothing to do with the original TB-303, with the exception of a few bass samples and the familiar interface design. The most obvious difference was the inclusion of an inexpensive digital synthesizer, rather than the analog circuitry of the TB-303.

By , synthesizers were beginning to take hold among electronic musicians. One notable package was made by Propellerhead Software's emulator package entitled . The software became very popular, providing a cheap and easy way for musicians to reproduce the classic TB-303, 808, and later 909 sounds, without the need for any synthesis hardware. Roland contacted Propellerhead to give the company an unofficial "thumbs up" which Propellerhead considered as the Roland "Seal of Approval" [cite web|title="The Debut"|publisher=The Rebirth Museum|author=Propellerheads|date=2005|accessdate=2007-04-15|url=http://www.rebirthmuseum.com/history/part4.htm] . As of , support for ReBirth has been discontinued by Propellerhead software, and the software is now available online as a free download.

The MicroComposer is a monophonic /sequencer released by Roland in 1983. It is perhaps the clone that most resembles the sound of the Roland TB-303. It is also similar to the SH-101 synthesizer, featuring one with simultaneous saw and square/pulse-width waveforms and a resonant -24db filter.

Another notable clone is the "Bass Line" plugin from AudioRealism. It supports both the VST and AU standards.

The most recent clone is an hardware solution called the , using most of the original components in the synthesizer section for a very authentic sound. The sequencer section differs from the original TB-303, adding support for and interfaces as well as an alternate event entry interface.

Native Instrument's flagship softsynth Massive also contains a filter modelled after that of the TB-303, allowing users to create their own realistic-sounding acid patches.

Hardware synthesizers inspired by the TB-303