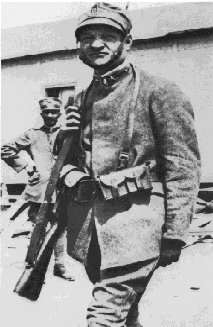 Giuseppe Ungaretti (, &ndash;, ) was an Italian modernist poet, journalist, essayist, critic and academic. A leading representative of the experimental trend known as "", he was one of the most prominent contributors to 20th century . Influenced by symbolism, he was briefly aligned with . Like many futurists, he took an irredentist position during . Ungaretti debuted as a poet while fighting in the trenches, publishing one of his best-known pieces, "" ("The Joy").

During the , Ungaretti was a collaborator of (whom he met during his socialist accession), [ [http://www.novecentoletterario.it/profili/profilo%20di%20ungaretti.htm Luigi Pacella, "Profilo di Letteratura italiana (Giuseppe Ungaretti/biografia)", on Novecento letterario.it] , "...nel 1915 conobbe anche Benito Mussolini e ne divenne amico" ("...in 1915 he met also Benito Mussolini and became one of his friends").] as well as a foreign-based correspondent for "" and "". While briefly associated with the Dadaists, he developed "ermetismo" as a personal take on poetry. After spending several years in , he returned home during , and was assigned a teaching post at the University of Rome, where he spent the final decades of his life and career. His fascist past was the subject of controversy.

World War I and debut

Upon the outbreak of in 1914, Ungaretti, like his Futurist friends, supported an irredentist position, and called for his country's intervention on the side of the Entente Powers. [Picchione & Smith, p.205] Enrolled in the infantry a year later, he saw action on the Northern Italian theater, serving in the trenches. [Payne; Picchione & Smith, p.205] In contrast to his early enthusiasm, he became appalled by the realities of war. [Picchione & Smith, p.205] The conflict also made Ungaretti discover his talent as a poet, and, in 1917, he published the volume of "Il porto sepolto" ("The Buried Port"), largely written on the front. [Picchione & Smith, p.205; Talbot, p.128] Although depicting the hardships of war life, his celebrated "L'Allegria" was not unenthusiastic about its purpose (also if in the poem "Fratelli", and in others, he describes the absurdity of the war and the brotherhood between all the men); this made Ungaretti's stance contrast with that of writers, who questioned their countries' intents, and similar to that of Italian intellectuals such as Soffici, , and . [David Forgacs, "Twentieth-century Culture", in George Holmes (ed.), "The Oxford Illustrated History of Italy", , Oxford, p.300. ISBN 0198205279]

During that period in Paris, Ungaretti came to affiliate with the and anti-art current known as ism. He was present in the Paris-based Dadaist circle led by n poet , being, alongside , , , and , one of the figures who established a transition from Italian Futurism to Dada. [Richter, p.199] In May 1921, he was present at the Dadaist mock trial of author , during which the Dadaist movement began to separate itself into two competing wings, respectively headed by Tzara and . [Richter, p.183-184] He was also affiliated with the literary circle formed around the journal "". [Payne]

The year after his marriage, he returned to Italy, settling in Rome as a Foreign Ministry employee. [Picchione & Smith, p.205] By then, Mussolini had organized the , which confirmed his seizure of power. Ungaretti joined in the , signing the pro-fascist "Manifesto of the Italian Writers" in 1925. In his essays of 1926-1929, republished in 1996, he repeatedly called on the "" to direct cultural development in Italy and reorganize the Italian Academy on fascist lines.

In 1925, Ungaretti experienced a religious crisis, which, three years later, made him return to the Roman Catholic Church. [Picchione & Smith, p.205] Meanwhile, he contributed to a number of journals and published a series of poetry volumes, before becoming a foreign correspondent for "" in 1931, and traveling not only to Egypt, and the , but also to various regions of Italy. [Picchione & Smith, p.205]

It was during this period that Ungaretti introduced "", baptized with the Italian-language word for "".

World War II and after

"L'Allegria" is a decisive moment of the recent history of Italian literature: Ungaretti revises with novel ideas the poetic style of the "poets maudits" (especially the broken verses without punctation marks of ’s "Calligrammes"), [Elio Gioanola, "Storia letteraria del Novecento in Italia", SEI, Torino 1966, p.186] connecting it with his experience of death and excruciating pains as soldier at war. The hope of brotherhood between all the people is strongly expressed, together with the desire of searching for a renovated "harmony" with the universe, [E. Gioanola, "ibidem", p.187] impressive on the famous verses of "Mattina":

In the successive works he studied the importance of the poetic word, as the only way to save the humanity from the universal horror, and was searching for a new way to recuperate the roots of the Italian classical poetry. [E. Gioanola, "ibidem", p.188] His last verses are on the poem "l'Impietrito e il Velluto", about the memory of the " bright universe eyed" Dunja, an old woman that was house guest of his mother in the time of his childhood. Here's the end:

"(The velvet in the bright gaze of Dunja"
"Rapid returns as present mercy)" [G.Ungaretti, "ibidem"]

Although Ungaretti parted with "Ermetismo", his early experiments were continued for a while by poets such as , and . His collected works were published as "Vita di un uomo" ("The Life of a Man") at the time of his death. [Payne]

Two of Ungaretti's poems ("Soldiers - War - Another War" and "Vanity") were made into song by American composer ("Eleven Intrusions", 1949-50); and eleven poems were set by the French-Romanian composer in his cycle "End of Kronos" (1999).