Achromatopsia (ACHM), is a medical syndrome that exhibits symptoms relating to at least five separate individual disorders. Although the term may refer to acquired disorders such as color agnosia and cerebral achromatopsia, it typically refers to an autosomal recessive congenital color vision disorder, the inability to perceive color and to achieve satisfactory visual acuity at high light levels (typically exterior daylight). The syndrome is also present in an incomplete form which is more properly defined as dyschromatopsia. The only estimate of its relative occurrence of 1:33,000 in the general population dates from the 1960s or earlier.

There is some discussion as to whether achromats can see color or not. As illustrated in The Island of the Colorblind by Oliver Sacks, some achromats cannot see color, only black, white, and shades of grey. With 5 different genes currently known to cause similar symptoms, it may be that some do see marginal levels of color differentiation due to different gene characteristics. With such small sample sizes and low response rates, it is difficult to accurately diagnose the 'typical achromatic conditions'. If the light level during testing is optimized for them, they may achieve corrected visual acuity of 20/100 to 20/150 at lower light levels, regardless of the absence of color. One common trait is hemeralopia or blindness in full sun. In patients with achromatopsia, the cone system and fibres carrying colour information remain intact. This indicates that the mechanism used to construct colours is defective.

The syndrome is frequently noticed first in children around six months of age by their photophobic activity and/or their nystagmus. The nystagmus becomes less noticeable with age but the other symptoms of the syndrome become more relevant as school age approaches. Visual acuity and stability of the eye motions generally improve during the first 6–7 years of life (but remain near 20/200). The congenital forms of the disorder are considered stationary and do not worsen with age.

A sixth symptom associated with achromatopsia/dychromatopsia is seldom reported. Many sufferers are unaware of the three-dimensional aspect of their visual system. They frequently fail to observe any of the stereographic features of a scene.[citation needed]

The syndrome of achromatopsia/dyschromatopsia is poorly described in current medical and neuro-ophthalmological texts. It became a common term following the popular book by the neuroscientist Oliver Sacks, "The Island of the Colorblind," in 1997. Up to that time most color-blind subjects were described as achromats or achromatopes. Those with a lesser degree of color perception abnormality were described as either protanopes, deuteranopes or tetartanopes (historically tritanopes).

Achromatopsia has also been called rod monochromacy and total congenital color blindness. Individuals with the congenital form of this disorder show complete absence of cone cell activity via electroretinography at high light levels. There are at least four genetic causes of congenital ACHM, two of which involve cyclic nucleotide-gated ion channels (ACHM2/ACHM3), a third involves the cone photoreceptor transducin (GNAT2, ACHM4), and the last remains unknown.

Aside from a complete inability to see color, individuals with complete achromatopsia have a number of other ophthalmologic aberrations. Included among these aberrations are greatly decreased visual acuity (<0.1 or 20/200) in daylight Hemeralopia, nystagmus, and severe photophobia. The fundus of the eye appears completely normal.

Acquired achromatopsia/dyschromatopsia is a condition associated with damage to the diencephalon (primarily the thalamus of the mid brain) or the cerebral cortex (the new brain).

Cerebral achromatopsia is a form of acquired color blindness that is caused by damage to the cerebral cortex of the brain, rather than abnormalities in the cells of the eye's retina. It is most frequently caused by physical trauma, hemorrhage or tumor tissue growth.

The known causes of the congenital forms of achromatopsia are all due to malfunction of the retinal phototransduction pathway. Specifically, this form of ACHM seems to result from the inability of cone cells to properly respond to light input by hyperpolarizing. Known genetic causes of this are mutations in the cone cell cyclic nucleotide-gated ion channels CNGA3 (ACHM2) and CNGB3 (ACHM3) as well as the cone cell transducin, GNAT2 (ACHM4).

The hemeralopic aspect of ACHM can be diagnosed non-invasively using electroretinography. The response at low (scotopic) and median (mesotopic) light levels will be normal but the response under high light level (photopic) conditions will be absent. The mesotopic level is approximately 100 times lower than the clinical level used for the typical high level electroretinogram. When as described, the condition is due to a saturation in the neural portion of the retina and not due to the absence of the photoreceptors per se.

In general, the molecular pathomechanism of ACHM is either the inability to properly control or respond to altered levels of cGMP. cGMP is particularly important in visual perception as its level controls the opening of cyclic nucleotide-gated ion channels (CNGs). Decreasing the concentration of cGMP results in closure of CNGs and resulting hyperpolarization and cessation of glutamate release. Native retinal CNGs are composed of 2 α- and 2 β-subunits, which are CNGA3 and CNGB3, respectively, in cone cells. When expressed alone, CNGB3 cannot produce functional channels, whereas this is not the case for CNGA3. Coassembly of CNGA3 and CNGB3 produces channels with altered membrane expression, ion permeability (Na+ vs. K+ and Ca2+), relative efficacy of cAMP/cGMP activation, decreased outward rectification, current flickering, and sensitivity to block by L-cis-diltiazem. Mutations tend to result in the loss of CNGB3 function or gain of function (often increased affinity for cGMP) of CNGA3. cGMP levels are controlled by the activity of the cone cell transducin, GNAT2. Mutations in GNAT2 tend to result in a truncated and, presumably, non-functional protein, thereby preventing alteration of cGMP levels by photons. There is a positive correlation between the severity of mutations in these proteins and the completeness of the achromatopsia phenotype.

While some mutations in CNGA3 result in truncated and, presumably, non-functional channels this is largely not the case. While few mutations have received in-depth study, see table 1, at least one mutation does result in functional channels. Curiously, this mutation, T369S, produces profound alterations when expressed without CNGB3. One such alteration is decreased affinity for Cyclic guanosine monophosphate. Others include the introduction of a sub-conductance, altered single-channel gating kinetics, and increased calcium permeability. When mutant T369S channels coassemble with CNGB3, however, the only remaining aberration is increased calcium permeability.[2] While it is not immediately clear how this increase in Ca2+ leads to ACHM, one hypothesis is that this increased current decreases the signal-to-noise ratio. Other characterized mutations, such as Y181C and the other S1 region mutations, result in decreased current density due to an inability of the channel to traffic to the surface.[3] Such loss of function will undoubtedly negate the cone cell's ability to respond to visual input and produce achromatopsia. At least one other missense mutation outside of the S1 region, T224R, also leads to loss of function.[2]

While very few mutations in CNGB3 have been characterized, the vast majority of them result in truncated channels that are presumably non-functional, table 2. This will largely result in haploinsufficiency, though in some cases the truncated proteins may be able to coassemble with wild-type channels in a dominant negative fashion. The most prevalent ACHM3 mutation, T383IfsX12, results in a non-functional truncated protein that does not properly traffic to the cell membrane.[7][8] The three missense mutations that have received further study show a number of aberrant properties, with one underlying theme. The R403Q mutation, which lies in the pore region of the channel, results in an increase in outward current rectification, versus the largely linear current-voltage relationship of wild-type channels, concomitant with an increase in cGMP affinity.[8] The other mutations show either increased (S435F) or decreased (F525N) surface expression but also with increased affinity for cAMP and cGMP.[7][8] It is the increased affinity for cGMP and cAMP in these mutants that is likely the disorder-causing change. Such increased affinity will result in channels that are insensitive to the slight concentration changes of cGMP due to light input into the retina. 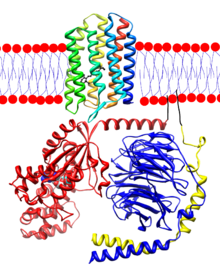 Sensory rhodopsin II (rainbow colored) embedded in a lipid bilayer (heads red and tails blue) with Transducin below it. Gtα is colored red, Gtβ blue, and Gtγ yellow. There is a bound GDP molecule in the Gtα-subunit and a bound retinal (black) in the rhodopsin. The N-terminus terminus of rhodopsin is red and the C-terminus blue. Anchoring of transducin to the membrane has been drawn in black.

Upon activation by light, rhodopsin causes the exchange of GDP for GTP in the guanine nucleotide binding protein (G-protein) α-transducing activity polypeptide 2 (GNAT2). This causes the release of the activated α-subunit from the inhibitory β/γ-subunits. This α-subunit then activates a phosphodiesterase that catalyzes the conversion of cGMP to GMP, thereby reducing current through CNG3 channels. As this process is absolutely vital for proper color processing it is not surprising that mutations in GNAT2 lead to achromatopsia. The known mutations in this gene, table 3, all result in truncated proteins. Presumably, then, these proteins are non-functional and, consequently, rhodopsin that has been activated by light does not lead to altered cGMP levels or photoreceptor membrane hyperpolarization.

There is generally no treatment to cure achromatopsia. However, since 2003, there is a cybernetic device called eyeborg that allows people to perceive colour through sound waves.[14] Achromatopsic artist Neil Harbisson was the first to use such a device in early 2004, the eyeborg allowed him start painting in color by memorizing the sound of each colour.[15]

Moreover, there is some research on gene therapy for animals with achromatopsia, with positive results on mice and young dogs, but less effectiveness on older dogs. However, no experiments have been made on humans. There are many challenges to conducting gene therapy on humans. See Gene therapy for color blindness for more details about it.

In approximately 1775 Typhoon Lengkieki struck and devastated the Micronesian atoll of Pingelap. The typhoon and ensuing famine left only around 20 survivors, one of whom was heterozygous for achromatopsia. Four generations after this population bottleneck the prevalence of achromatopsia is 5% with a further 30% as carriers. The people of this region have termed achromatopsia "maskun", which literally means "not see" in Pingelapese. This unusual population drew neurologist Oliver Sacks to the island for which he wrote his 1997 book, The Island of the Colour-blind.[18][19] Steppenwolf front man John Kay suffers from achromatopsia.