The front of the College of Creative Studies

The College of Creative Studies is one of the three undergraduate colleges at the University of California, Santa Barbara, unique within the University of California system in terms of structure and philosophy. Its small size, student privileges, and grading system are designed to encourage self-motivated students with strong interests in a field to accomplish original work as undergraduates. A former student has called it a “graduate school for undergraduates”. The college has fewer than 350 students in eight majors and approximately 60 professors and lecturers. There is an additional application process to the standard UCSB admission for prospective CCS students, and CCS accepts applications for admissions throughout the year.

In the late 1960s, the Chancellor of UCSB, Vernon I. Cheadle, was looking for an alternative education program for undergraduate students which could embody the new thinking of the 60s and also attract attention to his growing university. He contacted a professor in the English department, Marvin Mudrick, to come up with ideas for this new program. In 1967 the University of California allowed funding for Mudrick to start up the most promising of those ideas, the College of Creative Studies.

The program started with approximately 50 students in 7 majors: Art, Biology, Chemistry, Mathematics, Music Composition, Literature and Physics. The experimental program struck a chord with its students and faculty, and along with the powerful pushing of Mudrick as its provost, it secured its place at UCSB. The program grew over the years in student and faculty size and in 1975 found its home in a building at UCSB that dates from when the campus was a World War II marine base. In 1995 the college added the major of Computer Science. In 2005, with the retirement of Provost William Ashby, the title of the Provost was changed to Dean and the College was placed under the leadership of Dr. Bruce Tiffney.

The Art department includes the only undergraduate book arts program in the University of California system. Recently, the Physics program has become regarded as one of the best undergraduate Physics programs in the nation; its students attend graduate schools with percentages resembling those of Ivy Leagues. CCS students have won the UCSB Chancellor's Award for Excellence in Undergraduate Research several times in recent years. Literature students run Spectrum, a literary magazine, and Into the Teeth of the Wind, a poetry review.

The philosophy of the College of Creative Studies is that certain undergraduate students are capable of rigorously exploring and adding to their chosen field of knowledge. Students skip introductory courses as appropriate and are encouraged to accomplish original work throughout their time at the College: Literature students compile a portfolio of writing, art students put on a minimum of two shows displaying their work, music students perform their own compositions, and science students enter labs by their sophomore years to conduct research and write scholarly papers for publication.

The College considers students to be the most important people involved, not the faculty or administration. It has a low student-teacher ratio, and each student is paired with a faculty adviser with whom they meet at least once a quarter.

CCS students have few general education requirements and may take almost any course in the entire university, including graduate classes, without being required to complete the prerequisites. They can drop classes and change grading options up to the last day of the quarter, a privilege intended to encourage students to attempt taking many units and advanced classes without being penalized in the case that they bit off more than they could chew.

In CCS classes, students do not receive letter grades. Instead, the College uses a sliding unit scale where if a student completes all the work for a class at a satisfactory level, the student receives a full 4 units for most classes. If the student completes less work, he/she would receive fewer units, and if the student goes beyond expectations, a professor may give student more units. This system aims to promote a non-competitive atmosphere that focuses more on the student learning the material rather than learning how to take a test.

CCS students are afforded many privileges to help in the pursuit of their education. 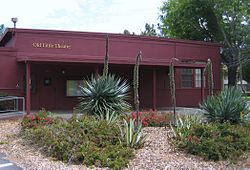 The College of Creative Studies is housed in its own single story building, number 494, located between campus dorms, a dining commons, and the University Center. The building was built during World War II and shares the title as the oldest building at UCSB with the other buildings left from when the campus was a marine base.

The building acts as a "home base" for its students, who spend time in the building studying and socializing. Students are allowed to personalize the building, so the walls have stickers and art, classrooms contain couches and modified desks and there are a few roaming stuffed animals.

Although many students and staff members are fond of the building, the college has outgrown it and is looking for funds to renovate it and/or build new facilities.