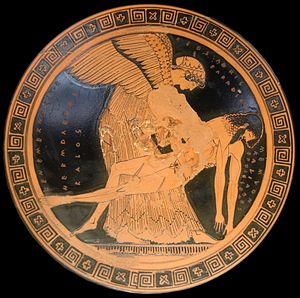 The so-called "Memnon pietà": The goddess Eos lifts up the body of her son Memnon (Attic red-figure cup, ca. 490–480 BC, from Capua, Italy)

In Greek mythology, Memnon (Greek: Mέμνων) was an Ethiopian king and son of Tithonus and Eos. As a warrior he was considered to be almost Achilles' equal in skill. During the Trojan War, he brought an army to Troy's defense. The death of Memnon echoes that of Hector, another defender of Troy whom Achilles also killed out of revenge for a fallen comrade, Patroclus. After Memnon's death, Zeus was moved by Eos' tears and granted her immortality. Memnon's death is related at length in the lost epic Aethiopis, composed after The Iliad circa the 7th century BC. Quintus of Smyrna records Memnon's death in Posthomerica. His death is also described in Philostratus' Imagines.

Memnon in Quintus of Smyrna's Posthomerica

Memnon arrives at Troy in the immediate aftermath of an argument between Polydamas, Helen, and Priam that centers on whether or not the Aethiopian King will show up at all. Memnon's army is described as being too big to be counted and his arrival starts a huge banquet in his honour. As per usual the two leaders (Memnon and, in this case, Priam) end the dinner by exchanging glorious war stories, and Memnon's tales lead Priam to declare that the Aethiopian King will be Troy's saviour. Despite this, Memnon is very humble and warns that his strength will hopefully be seen in battle, although he believes it is unwise to boast at dinner. Before the next day's war, so great was the divine love towards Memnon, Zeus makes all the other Olympians promise not to interfere with the fighting. In battle, Memnon kills Nestor's son, Antilochos, after Antilochos had killed Memnon's dear comrade, Aithops. Seeking vengeance and despite his age Nestor tries to fight Memnon but the African warrior insists it would not be just to fight such an old man, and respects Nestor so much that he refuses to fight. In this way, Memnon is seen as very similar to Achilles - both of them have strong sets of values that are looked upon favourably by the warrior culture of the time. When Memnon reaches the Greek ships, Nestor begs Achilles to fight him and avenge Antilochos, leading to the two men clashing whilst both wearing divine armour made by Hephaestus, making another parallel between the two warriors. Zeus favours both of them and makes each man tireless and huge so that the whole battlefield can watch them clash as demi-Gods. Eventually, Achilles stabs Memnon through the heart, causing his entire army to flee in terror. In honour of Memnon, the Gods collect all the drops of blood that fall from him and use them to form a huge river that on every anniversary of Memnon's death bears the stench of human flesh.[1] The Aethiopians that stayed close to Memnon in order to bury their leader are turned into birds (which we now call Memnons) and they stay by his tomb so to remove dust that gathers on it.[2] 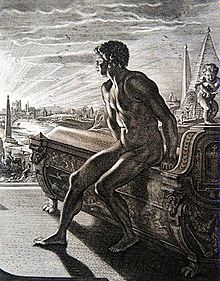 Roman writers and later classical Greek writers such as Diodorus Siculus believed Memnon hailed from "Aethiopia", a vaguely defined geographical area in Africa, usually south of Egypt. Earlier Greek writers placed Memnon in "Asia", which most of them equated with "Cissia", corresponding to the Bronze Age Kassite state and to modern Khuzestan in southwest Iran. These Greek writers also credited Memnon with founding Khuzestan's main city, Susa. Aeschylus[3] and Ctesias[4] both identified Memnon as a Cissian and founder of Susa. Herodotus called Susa "the city of Memnon,"[5] but distinguished between Cissia and Asiatic Ethiopia, which he placed in the 17th Persian satrapy together with Paricanians, probably located in present-day Iran.[6] Herodotus describes two tall statues with Egyptian and Ethiopian dress that some, he says, identify as Memnon; he disagrees, and says he doesn't know who it is.[7] One of the statues was on the road from Smyrna to Sardis. [8] A carved figure matching this description has been found near the old road from Smyrna to Sardis. [9]

Pausanias describes how he marveled at a colossal statue in Egypt:

In Egyptian Thebes, on crossing the Nile to the so called Pipes, I saw a statue, still sitting, which gave out a sound. The many call it Memnon, who they say from Aethiopia overran Egypt and as far as Susa. The Thebans, however, say that it is a statue, not of Memnon, but of a native named Phamenoph, and I have heard some say that it is Sesostris. This statue was broken in two by Cambyses, and at the present day from head to middle it is thrown down; but the rest is seated, and every day at the rising of the sun it makes a noise, and the sound one could best liken to that of a harp or lyre when a string has been broken.[10]

In Blacks in Antiquity, Frank Snowden examined the later Greek and Roman tradition tying Memnon to African "Ethiopia". Snowden notes that according to Greek tradition, Memnon was the progenitor of the Ethiopians, which in this context referred to African people. Through changing depictions of Memmnon on vase paintings and scenes of the Trojan War, Snowden shows that the Asiatic portrayal of Memnon was abandoned in favor of an African origin. Literary accounts of the Trojan war, as well as numerous Roman authors, consistently describe Memnon with African characteristics as an Ethiopian from Sudan and Egypt.[11]

In the prologue to his Prose Edda, the Icelandic scribe Snorri Sturluson states that Memnon (whom he says is also known as Munon) was one of the kings present at Troy, who married Troana, the daughter of king Priam. He further relates that they gave birth to their son Tror, that is, Thor, born with hair "fairer than gold", who later becomes king of Thrace, and ancestor to all the Germanic kings.