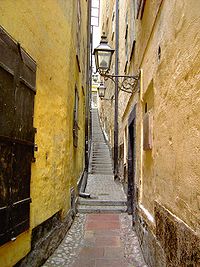 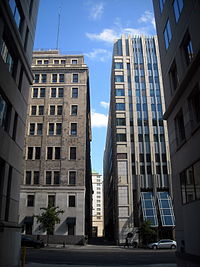 An alley in Sausalito, California 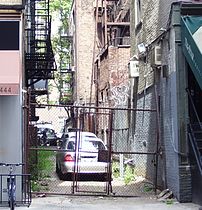 Broadway Alley, a rare alley in Manhattan, is not near Broadway 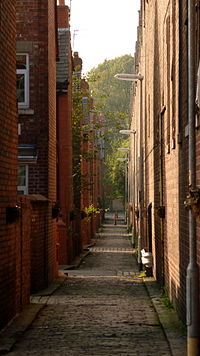 An alley or ginnel in Moss Side, Manchester, UK 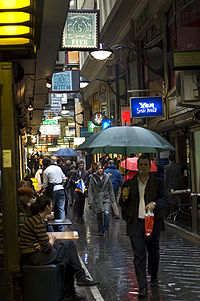 An alley or alleyway is a narrow lane found in urban areas, often for pedestrians only, which usually runs between or behind buildings. In older cities and towns in Europe, alleys are often what is left of a medieval street network, or a right of way or ancient footpath in an urban setting. In older urban development, alleys were built to allow for deliveries such as coal to the rear of houses. Alleys may be paved, or simply dirt tracks. A blind alley has no outlet at one end and is thus a cul-de-sac.

Many modern urban developments do not incorporate alleys. In some locations installation of gates to restrict alleyway access have significantly reduced burglary rates.[citation needed] On blocks where gates are not installed, residents sometimes erect home-made barricades at alley entrances.

Andrés Duany, American architect and urban planner has long espoused the use of alleys as leading to a better integration of automobile and foot traffic in a neighborhood.[citation needed]

In some modern urban developments, a service road may be built to allow for waste collection, or rear access for fire engines and parking.

In the United States alleys exist in both older commercial and residential areas, for both service purposes and automobile access. In residential areas, primarily those built before 1950, alleys provide rear access to property where a garage was located, or where waste could be collected by service vehicles. A benefit of this was the location of these activities to the rear, less public side of a dwelling. Such alleys are typically roughly paved, but some may be dirt. By 1950 they had largely disappeared from development plans for new homes.

Chicago, Illinois has about 1,900 miles (3,100 km) of alleyways.[1] In 2007, the Chicago Department of Transportation started converting conventional alleys which were made out of asphalt, into so called Green Alleys. This program, called the Green Alley Program, is supposed to enable easier water runoff, as the alleyways in Chicago are not connected to the sewer system. With this program, the water will be able to seep through semipermeable concrete or asphalt in which a colony of fungi and bacteria will establish itself. The bacteria will help breakup oils before the water is absorbed into the ground. The lighter color of the pavement will also reflect more light, making the area next to the alley cooler.[2]

Manhattan, New York City is unusual in that it has very few alleys.

Reduced usage of alleys can result in their decline. Under use, poor maintenance, poor night time illumination and narrow width may contribute to an increase in anti-social or illegal activities.

On the other hand, in some cities, such as Melbourne, the laneways are vital and popular parts of the city and filled with shops, bars and cafés.

"Allee" is a term used in contemporary landscape architecture to denote a narrow passageway, sometimes for pedestrians only, other times for both vehicles and pedestrians, that is lined with copious numbers of trees. The result is a peaceful, verdant place for strolling and sitting.

Many alleys, particularly 19th century ones, are wide enough to support automobile traffic. Such alleys are used in residential areas to gain access to garages that were built behind houses after the rise of the automobile. Others can be found in older industrial areas. Because alleys are narrow and often have only enough room for one vehicle to pass at a time, many alleys are one-way only. An alley serving the main entrance of residential, commercial, or industrial buildings, or carrying significant traffic, may be given a separate street name.

"Alley" is of French origin, meaning "a way to go", and has been adapted in English as above. It is also used in parts of Europe such as Croatia and Serbia as a name for a boulevard, an avenue or a parkway (such as Bologna Alley in Zagreb). The Swedish word "allé" and the German word "Allee" refers to any type of road lined with trees (such as Karl-Marx-Allee in Berlin). Czech and some other Slavic languages use the term "ulička" instead,[7] a diminutive form of "ulice", the word for street.

In typography, "alley" is also used to refer to the gap between two columns of text.[8]