Chittoor district
This article is about the district. For its eponymous headquarters, see Chittoor. 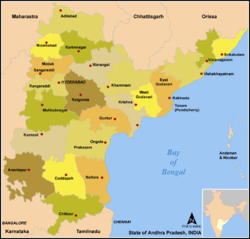 Chittoor is the southernmost district of Andhra Pradesh.

pronunciation (help·info) (Telugu: చిత్తూరు జిల్లా, Urdu: چتور ضلع, Tamil: சித்தூர்), also known as Chittur, is a district of India's Andhra Pradesh state. The district headquarters is Chittoor City. The district has a population of 4,170,468 according to 2011 census of India.[1] Chittoor district is famous for the Tirupati, Kanipakam and Sri Kalahasti temples. It lies in the Poini River valley of southernmost Andhra Pradesh, on the NH4 Bangalore-Chennai highway. It is a major market center for mangoes, grains, sugarcane, and peanuts. Major industries around the city are Amaron Batteries, nations leading automobile batteries, and Nutrine Confectionaries, a major chocolate/candies producer and this city is one of the major Granite, mango pulp producing centers of India.

The word Chittoor is combination of two Tamil words Chit+oor which means Small Town in Tamil language. In ancient days, Chittoor was part of Tamil country of Thondai Nadu.

Chittoor District was formed on 1 April 1911, taking CHITTOOR, PALAMANER, CHANDRAGIRI from North Arcot District and MADANAPALLI, VAYALPADU from Cuddapah and PUNGANUR,SRIKALAHASTI,OLD KARVETINAGARAM FROM ZAMINDARI Provinces to form united chittoor district, later in the late 1960s about 280 villages of chittoor district were added into the CHENGALPATTU AND TIRUVALLUR district of Tamil nadu.

Chittoor district occupies an area of 15,359 square kilometres (5,930 sq mi),[2] comparatively equivalent to Svalbard's Nordaustlandet.[3] The district is bounded by Anantapur District to the northwest, Cuddapah District to the north, Nellore District to the northeast, Krishnagiri District, Vellore District and Tiruvallur District of Tamil Nadu state to the south, and Kolar District of Karnataka state to the west. Chittoor district lies extreme south of the Andhra Pradesh state approximately between 12°37' - 14°8' north latitudes and 78°3' - 79°55' east longitudes.30% of the total land area is covered by forests in the district.[4] Mango and tamarind groves surround the city of Chittoor, and cattle are raised in the district. The soils in the district constitute redloamy 57%, red sandy 34% and the remaining 9% is covered by black clay black loamy, black sandy and red clay[4]

Chittoor is around 180KM from Bangalore, around 160KM from Chennai, and around 590KM from Hyderabad, state capital.

The important rivers in the district are Ponnai and Swarnamukhi rivers which originate in eastern ghats. Other rivers include Kusasthali, Beema, Bahuda, Pincha, Kalyani, Araniyar and Pedderu. None of the rivers are perennial. Rivers include:

In 2006 the Indian government named Chittoor one of the country's 250 most backward districts (out of a total of 640).[7] It is one of the thirteen districts in Andhra Pradesh currently receiving funds from the Backward Regions Grant Fund Programme (BRGF).[7]

There are 14 Andhra Pradesh Legislative Assembly MLA constituencies in Chittoor district.[10] They are

There are 66 Mandals in Chittoor district.[11]

The population of Chittoor District according to 1991 census was 32.5 lakhs with density of 214/km².

This educational society is formed in memory of renowned academician LateM. SITA RAM (Ex. Principal- FAC Govt Jr. College Palamaner) by his students, friends and family members in 2001. It was registered in 2007(Regd# 84/07).

Since its formation, the society has issued Certificates of Excellence for various students for their academic performance along with cash prizes at different schools and colleges across Chittoor district. Encouraging merit students and funding the poor (rural) students for their education, is the main objective of the organization.This organization is working for improving for rural education in the district.

The prime objective of this society is to encourage the students of Govt. schools and Junior colleges across the district. Dr.Padmabhushan K.Chiranjeevi, Great Actor, Tirupati MLA The great C.M.Kirin kumar reddy, belongs to hydrabad,not chittoor dist.cm only saing..