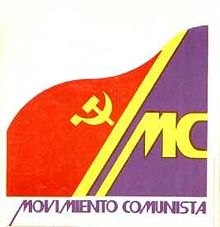 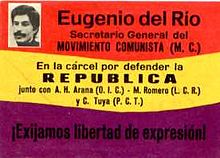 MCE attempted to unify with the Communist Unification of Spain (UCE), but that relation was later broken.

In 1976 MCE was restricted into a federal organization, and the name changed to MC. Regional affiliates included

MC appealed for abstention in the 1976 referendum.

In the 1977 general elections MC launched various electoral lists, like CUP in Madrid and CUPS in Catalonia.

On October 6, 1977 a group of MCPV militants and sympathizers were attacked by fascists while putting up posters in Alicante. Miquel Grau, a 20-year old MCPV sympathizer was killed.

In 1979 the Organisation of the Communist Left (OIC) merged into MC.

MCPV and the Revolutionary Communist League (LCR) formed a coalition, United Left of the Valencian Country (EUPV, different body than the present EUPV). In the 1983 regional assembly elections EUPV contested as part of the Valencian People's Unity (UPV). Later as MC disintegrated, MCPV and LCR militants in Valencia formed the collective Revolta.

In 1983 the Communist Movement of Euskadi (EMK) separated itself from MC and became an independent organization.

In 1991 MC merged with LCR and formed the Alternative Left (Izquierda Alternativa), which had a brief existence.