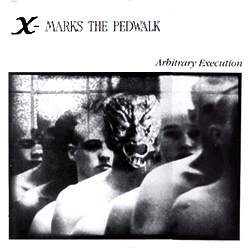 "Arbitrary Execution" was the first single released by André Schmechta (under the Sevren Ni-Arb) and Jörge Böhme (under the pseudonym Regan Eracs) since changing their band name from Scarecrow (see previous single, ""). It was X Marks the Pedwalk's first release on the German 's recently formed label, Zoth Ommog. "Arbitrary Execution" was initially released as a under the catalogue number ZOTH 05 (later changed to ZOT 05), but the songs later appeared on the compilation "" (released in the by under the name "Abattoir", not to be confused with the single of the same name). The title track was also later released on the best-of X Marks the Pedwalk compilation, "Retrospective", and Dying Culture's compilation, "Experiences".

The first piece, "Arbitrary Execution", exhibits many of the classical aspects of late eighties industrial dance music. In what is perhaps a conscious imitation of bands like , the track contains dancable rhythms, with grinding distorted beats and vocals. The second track, "Look on this Side", is dronish with haunting laughs and effects. The vocals are more throaty and quiet, the only lyric being "look on this side" repeated several times. The final track, the B-side "Dead Fuck", is another semi-dance track with militaristic rolling drum beats and heavily distorted vocals.