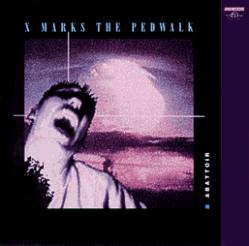 "Abattoir" is the name of a single by German band . It was released by in Europe in LP and format.

The song "Abattoir" is sometimes credited as "Abbatoir" on subsequent compilations. The former is the correct spelling, and is French for "".

"Abattoir" is the name of the third single by X Marks the Pedwalk (the fourth overall by the duo André Schmechta and Jörg Böhme), and is the first single by this band to be taken from an album ("Freaks", which followed shortly after). The vinyl version of "Abattoir" contained only two tracks, "Abattoir" and "Solitude", and was released in by records under the catalogue number ZOT 15. The CD version, however, contained two more tracks ("Abortion" and "Look on this Side"), and was also released by Zoth Ommog, this time with the catalogue number ZOT 15 CD. After these releases went out of print, the songs would again be released by Zoth Ommog on their best-of X Marks the Pedwalk compilation, "", which featured all four songs plus a new remix of "Abattoir". This compilation was licensed to and released in the by , who changed the name "Airbacktrax" to "Abattoir". The song "Abattoir" later found its way onto the compilations "Retrospective" and "Experiences", the former also contained "Look on this Side".