/ˌfɪləˈdɛlfəs/)[1] is a genus of about 60 species of shrubs from 1 to 6 m tall, native to North America, Central America, Asia and (locally) in southeast Europe.

They are named "mock-orange" in reference to their flowers, which in wild species look somewhat similar to those of oranges and lemons (Citrus) at first glance, and smell of orange flowers and jasmine (Jasminum). But Philadelphus is a basal asterid, not closely related to Jasminum (advanced asterids), and among the eudicots quite distant indeed from Citrus (advanced rosids). An entirely misleading name for Philadelphus that is sometimes encountered is syringa; this properly refers to the lilacs, which are fairly close relatives of jasmine. The connection of the two shrubs lies in their introduction from Ottoman gardens to European ones, effected at the same time by the Holy Roman Emperor's ambassador to the Sublime Porte, Ogier Ghiselin de Busbecq, who returned to Vienna in 1562. The two shrubs appear together in John Gerard's Herball, as "Blew Pipe" (the lilac) and "White Pipe Tree", for the wood of both is pithy and easily hollowed out.[2] 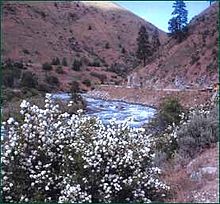 Most are deciduous but a few species from the south of the genus' range are evergreen. The leaves are opposite, simple, with serrated margins, from 1 to 14 cm long. The flowers are white, with four petals and sepals, 1-4 cm diameter, and commonly (but not in all species) sweetly scented. The fruit is a small capsule, containing numerous small seeds. The bark is thin and flaky, finely shredding in longitudinal strips.

Mock-oranges are used as food plants by the larvae of some Lepidoptera species including The Engrailed (Ectropis crepuscularia). A noted pathogen of the Sweet Mock-orange (P. coronarius) is the undescribed proteobacterium called "Pseudomonas tomato" (pv. philadelphi).

For a long time, Philadelphus coronarius was the only mock-orange of gardens, though some adventurous Americans grew the native P. inodorus that Mark Catesby had discovered growing on the banks of the Savannah River; it appeared in Lady Skipwith's garden lists and George Washington ordered some from Bartram in 1792.[3] Mock-oranges are popular shrubs in parks and gardens, grown for their reliable display of late spring flowers; the scented species are particularly valued. In addition to the species, there are numerous garden origin hybrids and cultivars available, selected for doubleness and large flowers, with some compromise as to scent.

Lewis' Mock-orange (P. lewisii) is the state flower of Idaho. 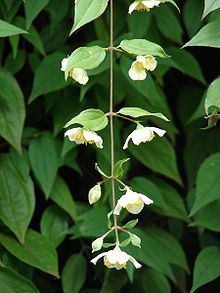 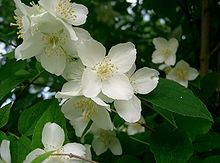 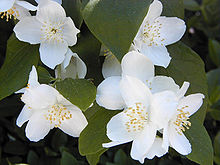