NDT methods may rely upon use of electromagnetic radiation, sound, and inherent properties of materials to examine samples. This includes some kinds of microscopy to examine external surfaces in detail, although sample preparation techniques for metallography, optical microscopy and electron microscopy are generally destructive as the surfaces must be made smooth through polishing or the sample must be electron transparent in thickness. The inside of a sample can be examined with penetrating electromagnetic radiation, such as X-rays or 3D X-rays for volumetric inspection. Sound waves are utilized in the case of ultrasonic testing. Contrast between a defect and the bulk of the sample may be enhanced for visual examination by the unaided eye by using liquids to penetrate fatigue cracks. One method (liquid penetrant testing) involves using dyes, fluorescent or non-fluorescing, in fluids for non-magnetic materials, usually metals. Another commonly used method for magnetic materials involves using a liquid suspension of fine iron particles applied to a part while it is in an externally applied magnetic field (magnetic-particle testing). Thermoelectric effect (or use of the Seebeck effect) uses thermal properties of an alloy to quickly and easily characterize many alloys. The chemical test, or chemical spot test method, utilizes application of sensitive chemicals that can indicate the presence of individual alloying elements. 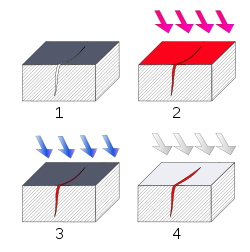 1. Section of material with a surface-breaking crack that is not visible to the naked eye.
2. Penetrant is applied to the surface.
3. Excess penetrant is removed.
4. Developer is applied, rendering the crack visible.

In manufacturing, welds are commonly used to join two or more metal surfaces. Because these connections may encounter loads and fatigue during product lifetime, there is a chance that they may fail if not created to proper specification. For example, the base metal must reach a certain temperature during the welding process, must cool at a specific rate, and must be welded with compatible materials or the joint may not be strong enough to hold the surfaces together, or cracks may form in the weld causing it to fail. The typical welding defects, lack of fusion of the weld to the base metal, cracks or porosity inside the weld, and variations in weld density, could cause a structure to break or a pipeline to rupture.

Welds may be tested using NDT techniques such as industrial radiography or industrial CT scanning using X-rays or gamma rays, ultrasonic testing, liquid penetrant testing or via eddy current. In a proper weld, these tests would indicate a lack of cracks in the radiograph, show clear passage of sound through the weld and back, or indicate a clear surface without penetrant captured in cracks.

Welding techniques may also be actively monitored with acoustic emission techniques before production to design the best set of parameters to use to properly join two materials.[5]

Structures can be complex systems that undergo different loads during their lifetime. Some complex structures, such as the turbomachinery in a liquid-fuel rocket, can also cost millions of dollars. Engineers will commonly model these structures as coupled second-order systems, approximating dynamic structure components with springs, masses, and dampers. These sets of differential equations can be used to derive a transfer function that models the behavior of the system.

In NDT, the structure undergoes a dynamic input, such as the tap of a hammer or a controlled impulse. Key properties, such as displacement or acceleration at different points of the structure, are measured as the corresponding output. This output is recorded and compared to the corresponding output given by the transfer function and the known input. Differences may indicate an inappropriate model (which may alert engineers to unpredicted instabilities or performance outside of tolerances), failed components, or an inadequate control system.

As a system, the human body is difficult to model as a complete transfer function. Elements of the body, however, such as bones or molecules, have a known response to certain radiographic inputs, such as x-rays or magnetic resonance. Coupled with the controlled introduction of a known element, such as digested barium, radiography can be used to image parts or functions of the body by measuring and interpreting the response to the radiographic input. In this manner, many bone fractures and diseases may be detected and localized in preparation for treatment. X-rays may also be used to examine the interior of mechanical systems in manufacturing using NDT techniques, as well.

(Source: Hellier, 2001) Note the number of advancements made during the WWII era, a time when industrial quality control was growing in importance.

NDT is used in a variety of settings that covers a wide range of industrial activity. 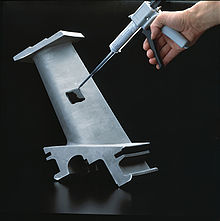 An example of a 3D replicating technique. The flexible high-resolution replicas allow surfaces to be examined and measured under laboratory conditions. A replica can be taken from all solid materials.

NDT is divided into various methods of nondestructive testing, each based on a particular scientific principle. These methods may be further subdivided into various techniques. The various methods and techniques, due to their particular natures, may lend themselves especially well to certain applications and be of little or no value at all in other applications. Therefore choosing the right method and technique is an important part of the performance of NDT.

Successful and consistent application of nondestructive testing techniques depends heavily on personnel training, experience and integrity. Personnel involved in application of industrial NDT methods and interpretation of results should be certified, and in some industrial sectors certification is enforced by law or by the applied codes and standards.

The following definitions for qualification and certification are given in ISO 9712[6] and EN 473[7]:

Non-Destructive Testing (NDT) training is provided for people working in many industries. It is generally necessary that the candidate successfully completes a theoretical and practical training program, as well as have performed several hundred hours of practical application of the particular method they wish to be trained in. At this point, they may pass a certification examination.[8] Further, NDT training has recently become available online. WorldSpec.org is one of the innovative companies that helped pioneer this new "era" in NDT Training.

There are two approaches in personnel certification:[9]

In the United States employer based schemes are the norm, however central certification schemes exist as well. The most notable is ASNT Level III (established in 1976-1977), which is organized by the American Society for Nondestructive Testing for Level 3 NDT personnel.[13] NAVSEA 250-1500 is another US central certification scheme, specifically developed for use in the naval nuclear program.[14]

Central certification is more widely used in the European Union, where certifications are issued by accredited bodies (independent organizations conforming to ISO 17024 and accredited by a national accreditation authority like UKAS). The Pressure Equipment Directive (97/23/EEC) actually enforces central personnel certification for the initial testing of steam boilers and some categories of pressure vessels and piping.[15] European Standards harmonized with this directive specify personnel certification to EN 473. Certifications issued by a national NDT society which is a member of the European Federation of NDT (EFNDT) are mutually acceptable by the other member societies [16] under a multilateral recognition agreement.

The aerospace sector worldwide sticks to employer based schemes.[20] In America it is based mostly on AIA-NAS-410 [21] and in the European Union on the equivalent and very similar standard EN 4179 [22]

Most NDT personnel certification schemes listed above specify three "levels" of qualification and/or certification, usually designated as Level 1, Level 2 and Level 3 (although some codes specify roman numerals, like Level II). The roles and responsibilities of personnel in each level are generally as follows (there are slight differences or variations between different codes and standards):

The standard US terminology for Nondestructive testing is defined in standard ASTM E-1316.[23] Some definitions may be different in European standard EN 1330.

Indication
The response or evidence from an examination, such as a blip on the screen of an instrument. Indications are classified as true or false. False indications are those caused by factors not related to the principles of the testing method or by improper implementation of the method, like film damage in radiography, electrical interference in ultrasonic testing etc. True indications are further classified as relevant and non relevant. Relevant indications are those caused by flaws. Non relevant indications are those caused by known features of the tested object, like gaps, threads, case hardening etc.
Interpretation
Determining if an indication is of a type to be investigated. For example, in electromagnetic testing, indications from metal loss are considered flaws because they should usually be investigated, but indications due to variations in the material properties may be harmless and nonrelevant.
Flaw
A type of discontinuity that must be investigated to see if it is rejectable. For example, porosity in a weld or metal loss.
Evaluation
Determining if a flaw is rejectable. For example, is porosity in a weld larger than acceptable by code?
Defect
A flaw that is rejectable — i.e. does not meet acceptance criteria. Defects are generally removed or repaired.[23]
Penetrant testing
Non-destructive test typically comprising a penetrant, a method of excess removal and a developer to produce a visible indication of surface-breaking discontinuities.[24]

Defect detection tests are among the more commonly employed of non-destructive tests. The evaluation of NDT reliability commonly contains two statistical errors. First, most tests fail to define the objects that are called "sampling units" in statistics; it follows that the reliability of the tests cannot be established. Second, the literature usually misuses statistical terms in such a way as to make it sound as though sampling units are defined. These two errors may lead to incorrect estimates of probability of detection. [25] [26]