Nobles of the Robe

Under the Old Regime, the Nobles of the Robe or Nobles of the Gown (French: Noblesse de robe) were French aristocrats who owed their rank to judicial or administrative posts — often bought outright for high sums. As a rule, these positions did not grant the holder with a title (count, duke, baron, etc), but were honorary positions almost always attached to a specific office (judge, councilor, etc). The office was often hereditary and by 1789, most Nobles of the Robe had inherited their position. They were the opposite of the "Nobles of the Sword" whose nobility was based on their families' traditional function as the military class, and whose titles were customarily attached to a fiefdom under the feudalist system. Together with the older nobility, Nobles of the Robe made up the Second Estate in pre-revolutionary France. 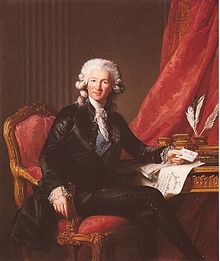 Because these nobles, especially the judges, had often studied at a university they were called Nobles of the Robe after the robes or gowns scholars wore, especially at commencement ceremonies. Originally given out as rewards for services to the king, the offices became a commodity to be bought and sold. This practice became official with the edict of la Paulette. As hereditary offices, they were often passed from father to son creating a class consciousness. Nobles of the Robe were often considered by Nobles of the Sword to be of inferior rank because their status was not derived from military service and/or land ownership. The elite Nobles of the Robe, such as the members of the parlements, fought to preserve their status alongside the Nobles of the Sword in pre-revolutionary society.

Originally, the offices within the Nobles of the Robe were relatively accessible due to their venal nature. However, after the 17th century the descendants of those who had earned the rank as a reward for services to the monarchy fought to limit access to the class. The Nobles of the Robe protested heavily when the monarchy, in desperate need of money, would create massive numbers of such positions within the bureaucracy to raise revenue.

The Enlightenment and the French Revolution