The North West Company is a grocery and merchandise store in remote communities across northern Canada and Alaska. Through its subsidiary, Cost-U-Less stores it also operates in the US territories of Guam, The CNMI, and American Samoa and in the Caribbean.

The company traces its history back to the North West Company, a fur trading business headquartered in the city of Montreal in British North America from 1779 to 1821.[2] It was merged into the Hudson's Bay Company in 1821. The enterprise continued as the Fur Trade Department, and then the Northern Stores Division of Hudson's Bay Company. In 1987, the division was acquired by a group of investors and in the 1990s it was relaunched under the old name of the North West Company. It is now a publicly traded company (TSX: NWF) and is composed mainly of the old HBC Northern Stores Division. 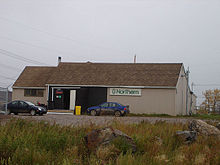 As of January 2004, the North West Company had 44,552 employees in Canada and 736 in Alaska, and was the largest employer of aboriginal people in the business sector. Holding to its roots, it also runs the largest Inuit art marketing service in the world and a fur marketing division. Outside North America, the company also operate Cost-U-Less stores in the US territories of Guam, The CNMI, and American Samoa.

It has its head office in Winnipeg, Manitoba, Canada, near the site of Upper Fort Garry. This building formerly served as the head office of the Hudson's Bay Company.