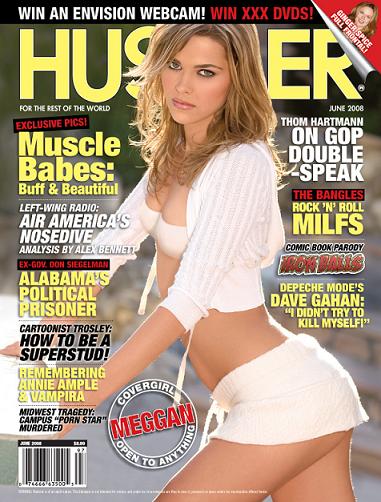 "Hustler" is a monthly pornographic aimed at heterosexual men and published in the . It was first published in July 1974 by . It was a step forward from the "Hustler Newsletter" and "The Hustler For Today's Man" which was cheap for his businesses at the time. The magazine grew from a shaky start to a peak circulation of around 3 million (current circulation is below 500,000).

"Hustler" was one of the first major men's magazines in the United States to break the taboo that existed in the early seventies by showing much more explicit views of the than other popular magazines of the time such as the relatively modest "". Today, "Hustler" is still considered more explicit than such well known competitors as "Playboy" and "Penthouse". It frequently depicts hardcore themes, such as the use of s, penetration and .

's "Hustler" empire also includes the Hustler in , as well as , a chain of Hustler stores that sells adult-oriented videos, clothing, magazines and sex toys. The chain's flagship store is on in .

Of particular infamy are "Hustler"s s, which have often featured blatantly violent and misogynistic themes. Gang , botched s, , and have all been featured at one time or another as recurring motifs in the cartoons. One long-running cartoon, "", presented the ongoing misadventures of a child molester in his attempts to coerce young children into sexual activity with him. While such material has earned "Hustler" much criticism from s and other critics, Flynt and his supporters defend the cartoons as bawdy social . Similar defenses have been advanced on "Hustler"s behalf by more scholarly writers, most notably in her essay "(Male) Desire and (Female) Disgust", published in 1993.

Another feature of "Hustler" is a column called "Asshole of the Month." In every monthly issue of the magazine, some public figure is selected for severe criticism as that month's asshole. An illustration showing a photograph of the criticized person's head emerging from the anus of a cartoon donkey is shown alongside the article. The column was alternatively written by various Hustler staff writers, including , Lee Quarnstrom, Michael Stott, Jerry Kindela, and . Goldman and Dawson (who later became known as the "Most Hated Man In Porn") were also charged with inventing all of the "Letters To The Editor." They then made up the responses to these letters, employing a multitude of pseudonyms.

In the 1970s, "Hustler" ran a comic strip feature entitled "". In each installment, Honey would have graphic sexual encounters with any male (or female) she ran across. She might be in American colonial times one month or in a Super-Bowl locker room the next. This feature was designed to compete against "Playboy"'s and "Penthouse"'s . In keeping with "Hustler"s focus on the seamier and less romantic aspects of sexuality, Honey Hooker, unlike Fanny and Wanda, was explicitly portrayed as being a prostitute.

There is also a section called "Beaver Hunt" which features photos of amateurs sent in for a cash prize--a similar idea to "Gallery"'s "Girl Next Door."

"Hustler" has long had a left-wing editorial policy on , , and social issues. This distinguishes it somewhat from other pornographic magazines, which generally embrace progressive ideas about and morality issues, but remain conservative, libertarian, or neutral on other matters such as the economy. Flynt and "Hustler" are also noted for having a more populist and working-class outlook than the more upscale-oriented "Playboy" and "Penthouse". Throughout the 1980s, Flynt used his magazine as a podium with which to launch vitriolic, obscenity-laden attacks on the and the Religious Right, and even published a short-lived political magazine called "Rebel". During the controversy surrounding 's impeachment, Flynt publicly announced his sympathy for Clinton, and offered cash rewards to anyone with information regarding sexual impropriety on the part of the president's critics. In 2003, Flynt ran unsuccessfully for the office of Governor of during that state's recall election.

Every month's "Hustler" is mailed, uninvited and for free, to the office of each member of the . This practice began at some point between 1974 and 1983, and it continues . In an interview, Flynt explained, "I felt that they should be informed with what's going on in the rest of the world ... Some of them didn't appreciate it much. I haven't had any plans to quit."

In a 1983 parody of an advertisement for , "Hustler" described the then-prominent fundamentalist Protestant minister having a drunken, uous encounter with his mother in an outhouse. Falwell sued Flynt, alleging and . The case was ultimately decided by the Supreme Court in Flynt's favor. The decision strengthened rights in relation to parodies of public figures ("see ")...

"Hustler" is officially published by LFP, Inc, which is presumably controlled by Flynt. The abbreviation "L.F.P." originally stood for "".

A Canadian version of "Hustler" is published by a Quebec-based firm. This magazine is not owned by Larry Flynt, but is licensed to publish material from the American version. In general, Canadian "Hustler" imitates the appearance and tone of its American counterpart, with Canadian content added. In 1999, the magazine created a minor controversy in Canada by inviting readers to submit sexually explicit stories about , a left-leaning member of the Liberal cabinet.

An Australian version of "Hustler" is published by an SA-based firm. This magazine is not owned by Larry Flynt. In general, Australian "Hustler" imitates the appearance and tone of its American counterpart, with Australian content added.

LFP, Inc. publishes several other magazines that use the "Hustler" brand:
* "", which specializes in fetishistic material, such as the depiction of sexual bondage and .
* "Barely Legal", a primarily softcore magazine focusing on models between 18 and 23
* "", focusing on Asian models
* "Hustler XX", a more generic hardcore offering
* "Hustler's Leg World"
* "Hustler's ", a pornographic magazine started by Larry Flynt, of Hustler fame in 1976, presented as being aimed at a more upscale clientele than Hustler.

The LFP Internet Group, LLC, operates Hustler.com and a number of related sites, where it sells pictures and videos with content similar to that in its magazines.