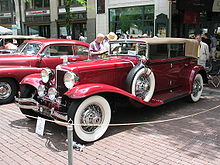 Cord was the brand name of a United States automobile, manufactured by the Auburn Automobile Company from 1929 through 1932 and again in 1936 and 1937.

The Cord Corporation was founded and run by E. L. Cord as a holding company for his many transportation interests, including Auburn. Cord was noted for its innovative technology and streamlined designs. Cord had a philosophy to build truly different, innovative cars, believing they would also sell well and turn a profit.[citation needed] This did not always work well in practice. 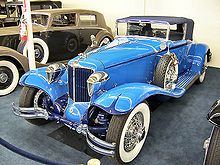 Cord innovations include front-wheel drive on the L-29 and hidden headlamps on the 810 and 812.

Front-wheel drive became common in the United States only in the 1980s, though Citroën introduced the Traction Avant in 1934, Ford offered it in certain models of its German-built Taunus, and General Motors sold the front wheel drive Oldsmobile Toronado in 1966 and Cadillac Eldorado in 1967. As personal luxury cars, these two GM models, especially the Toronado, were undoubtedly influenced by Cord.

Hidden headlamps did not become common as a standard feature until the 1960s (though DeSoto used them in 1942). The early Oldsmobile Toronados, whose GM stylists later stated they were trying to capture the "feel" of the Cord's design, also featured hidden headlamps.

This was the first American front-wheel drive car to be offered to the public,[1] beating the Ruxton automobile by several months, in 1929.[2] The brainchild of former Miller engineer Carl Van Ranst, its drive system borrowed from the Indianapolis 500-dominating racers, using the same de Dion layout and inboard brakes.[2] This allowed it to be much lower than competing cars. Both stock cars and special bodies built on the Cord chassis by American and European coachbuilders won prizes in contests worldwide. The L-29 came with full instrumentation, including a temp. gauge, oil pressure gauge, and speedometer on the left with a gas gauge, oil level gauge, and ammeter on the right of the steering wheel.[3]

The body design of the Cord 810 was the work of designer Gordon M. Buehrig and his team of stylists, which included young Vince Gardner. The first American front-wheel drive car with independent front suspension, but an archaic tube rear axle with semi-elliptic rear springs,[4] it used a 4,739 cc (289 cu in)[8] Lycoming V8 of the same 125 hp (93 kW) as the L-29.[4] The semi-automatic[9] four-speed transmission (three plus overdrive)[8] extended in front of the engine, like a Traction Avant. (This transmission was later modified and used in the rear-engined 1948 Tucker Sedan.)[citation needed] This allowed Buehrig to dispense with the driveshaft and transmission tunnel; as a result, the new car was so low it required no running boards.[4] It had a 125" wheelbase.[10]

Reportedly{[11]} conceived as a Duesenberg and nearly devoid of chrome, the 810 had hidden door hinges[4] and rear-hinged hood,[4] rather than the side-opening type more usual at the time, both new items. It also featured pontoon fenders with headlamps (modified Stinson landing lights)[4] that disappeared into the fenders via dashboard hand cranks, a concealed fuel filler door, variable-speed windshield wipers[4] (at a time when any wipers were rare, and those were likely operated by hand), and the famous louvered wraparound grill, from which its nickname "coffin-nose" derived.[4] Its engine-turned dashboard included complete instrumentation, a tachometer, and standard radio[4] (which would not become an industry standard offering until well into the 1950s).[12] The new car caused a sensation at the New York Auto Show in November 1935. The crowds around the 810 were so dense, attendees stood on the bumpers of nearby cars to get a look. Many orders were taken at the show, but the cars were not ready to deliver until February. Cord had rushed to build the 100 cars needed to qualify for the show,[4] and the transmission was not ready.[4] Even so, Cord took many orders at the show, promising Christmas delivery, expecting production of 1,000 per month. The semi-automatic transmission was more troublesome than expected,[13] and 25 December came and went with no cars built.[4] The first production vehicles were not delivered to New York City until April 1936.[14] In all, Cord managed to sell only 1,174 of the new 810 in its first model year, as the result of mechanical troubles.[8]

Supercharging was made available on the 1937 812 model. Supercharged 812 models were distinguished from the normally aspirated 812s by the brilliant chrome-plated external exhaust pipes mounted on each side of the hood and grill. With supercharging, horsepower was raised to 170.[15]

It was too late to save Cord,[8] but the contraction "Suped" (referring its supercharged engine) lived on in American lexicon as the hot-rodding phrase "Suped-Up" (as opposed to "souped-up", which referred to the drugging of horses).

A Cord Model 810 coupe (pictured) was featured in the 1975 film Doc Savage: The Man of Bronze.

Demise of the Cord 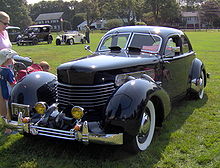 Early reliability problems, including slipping out of gear and vapor lock, cooled initial enthusiasm. Although most new owners loved their sleek fast cars, the dealer base shrank rapidly. Unsold left-over and in-process 1936 810 models were re-numbered and sold as 1937 812 models. In 1937, after producing about 3000 of these cars, Auburn ceased production of the Cord. A single 1938 Cord prototype with some changes to the grille and transmission cover was built, and it still exists to this day (2009). The Cord empire was sold to the Aviation Corporation, and E.L. Cord moved to Nevada where he earned millions in real estate and other enterprises.

The design of the Cord 810/812 remains one of the most distinctive of the 20th century. In 1996, American Heritage magazine proclaimed the Cord 810 sedan ‘The Single Most Beautiful American Car’. The ‘Classic Cord’ Hot Wheels toy car of the 1960s, a convertible coupé, is one of the most valuable, and commands up to US$800 (2006) if still in an unopened package.

The sensational Cord 812 design was re-marketed almost immediately in 1940, but as a weakly funded effort by ailing automakers Hupmobile and Graham-Paige, trying to save money by using the same body dies. Their 4-door sedans, the Hupp Skylark and the Graham Hollywood, were unremarkable. Retractable headlights gave way to plain headlight pods, and power came from a standard front-engine/rear-wheel drive design. Only about 1900 were built before production ceased in the fall of 1940. Between 1964 and 1970, two further attempts were made to replicate the original Buehrig design for limited production. Both Tulsa, Oklahoma-based companies soon halted production amid financial difficulties. The 1966 replica Cord 810 was powered by a Corvair drivetrain, while the 1968 thru 1970 models were Ford and Chrysler powered.