Coat of arms of Quebec

Coat of arms of Quebec

The coat of arms of Quebec was adopted by order-in-council of the Quebec government on 9 December 1939,[1] replacing the arms assigned by royal warrant of Queen Victoria on 26 May 1868.[2]

The shield is divided into three horizontal fields:

The shield is surmounted by the Tudor Crown, and accompanied by a silver scroll bearing the provincial motto, Je me souviens ("I remember").

(Tierced (divided into three parts) in fess, first azure, three fleurs-de-lis Or; second gules, a lion passant guardant of the second, armed and langued of the first; third, of the second, a sprig of three sugar maple leaves vert, nerved of the field. Ensigned with the royal crown. Under the shield, a scroll argent bordured azure bearing the motto Je me souviens of the same.) 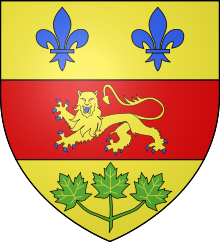 Arms were first granted to the province in 1868 by Queen Victoria. They were blazoned as follows:

Or on a Fess Gules between two Fleurs de Lis in chief Azure, and a sprig of three Leaves of Maple slipped Vert in base, a Lion passant guardant Or.

However, in 1939 the Quebec government adopted arms by Order-in-Council, replacing the two blue fleurs-de-lis on the golden field with the royal arms of France Moderne in chief. Quebec is the only Canadian province to have adopted arms by its own authority.[1]

The federal government is inconsistent in the use of the two variants: it often uses the 1939 variant, but in some cases, such as on the Centennial Flame on Parliament Hill and the badge of the Royal 22e Régiment, it uses the 1868 variant.