Wichita State University (WSU) is a NCAA Division I public university in Wichita, Kansas with selective admissions. WSU is one of six state universities governed by the Kansas Board of Regents. The current president is Dr. Donald Beggs.

With an enrollment of more than 14,000, the university's students come from almost every state in the United States and 110 foreign countries. 87 percent are from Kansas, representing nearly all counties in the state. Wichita State has 479 full-time faculty and 41 part-time faculty. Of the total, 73 percent have earned the highest degree in their field.

The 330-acre (1.3 km²) campus has one of the largest outdoor sculpture collections of any U.S. university. Approximately 1,000 students live in campus dormitories. The main campus is within short driving distance from Interstate 135 and the K-96 expressway in north Wichita.

Wichita State University began as Fairmount College, a private Congregational school, in 1886 by the Rev. Joseph Homer Parker. The college continued the preparatory program of Fairmount Institute, which started in 1892. Collegiate classes began in 1895. In 1926, by a vote of the citizens of Wichita, the college became a public non-denominational institution named the Municipal University of Wichita (popularly known as "Wichita" or "WU"); it was the first municipal university west of the Mississippi.

After 38 years as a municipal university, WSU changed its status on July 1, 1964, when it officially entered the state system of higher education. Wichita State University is one the three research institutions in Kansas, along with the University of Kansas and Kansas State University.

Wichita State is ranked at 505 among the top 1,000 universities in the United States.[5] They are also placed among Tier 2 National Universities in the United States (US News & World Report Best Colleges 2011).For all engineering research and development expenditures, WSU ranked No. 88 in the USA for year 2009, with $21.8 million, down from No. 70 previous year.[6] WSU aeronautical engineering research ranked third in the U.S., with expenditures of $32.4 million on aeronautical engineering research and development in 2007, the most recent numbers tracked by the NSF. Ahead of Wichita State in this ranking are Johns Hopkins University and Georgia Institute of Technology, respectively.[7] Wichita State's W. Frank Barton School of Business was listed in The Princeton Review 2011 "301 Best Business Schools," ranked as the 11th best program in the country for students seeking an undergraduate degree in entrepreneurship for 2007[8] In addition, Wichita State University is 32nd in the ranking of American Business Schools for Entrepreneurs (Success magazine, 2000).

David Jackman, who died Jan. 27, 2009, bequeathed $4 million to the WSU Foundation for the David and Sally Jackman Endowment for Anthropology.[11]

WSU is an NCAA Division I institution and fields teams in tennis, cross-country, basketball, track, golf, men's baseball and women's volleyball and softball. Also, it offers club sports such as crew, bowling and intramural sports. The men's baseball team is college baseball's highest winning team for the past 31 years, with numerous conference championships and NCAA tournament appearances. The baseball team won the national championship in 1989 and was runner-up in 1982, 1991 and 1993. They play at Eck Stadium. The men's basketball team reached the Final Four in 1965, the Elite Eight in 1981 and the Sweet Sixteen in 2006. The men's basketball team won the 2011 National Invitation Tournament Championship, beating the Alabama Crimson Tide. The men’s and women’s bowling teams have won numerous USBC Intercollegiate Team Championships [1], including the men’s 2003, 2008, 2009 and 2010 title and the women's 2005, 2007 and 2009 title.

The school discontinued its football program following the 1986 season due to poor attendance, financial red ink, NCAA recruiting violations, and the state of disrepair of Cessna Stadium. Legendary NFL coach Bill Parcells was a linebacker at WSU in 1962 and 1963 before serving as a graduate assistant in 1964. Wichita State University was also the first Division 1-A school to hire a black head coach in College Football, Willie Jeffries in 1979.[17][18] 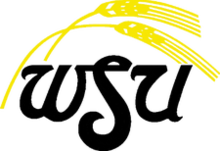 The name for WSU's athletic teams is the Shockers and, collectively, students are also referred to as being "Shockers". The name reflects the University's heritage: Early students earned money by shocking, or harvesting, wheat in nearby fields. Early football games were played on a stubbled wheat field. Pep club members were known as Wheaties. Tradition has it that in 1904, football manager and student R.J. Kirk came up with the nickname Wheatshockers. [2] Although the Wheatshockers name was never officially adopted by the university, it caught on and survived until it was later shortened to Shockers. Until 1948, the university used a nameless shock of wheat as its symbol. WuShock came to life when junior Wilbur Elsea won the Kappa Pi honorary society's competition to design a mascot typifying the spirit of the school. Elsea, who had been a Marine during World War II, decided that "the school needed a mascot who gave a tough impression, with a serious, no-nonsense scowl."

Once Elsea's mascot was adopted by the university, which by that time was known as the Municipal University of Wichita, all that was needed was a name. The Oct. 7, 1948, issue of The Sunflower, the student newspaper, ran an advertisement urging students to submit names for the school's new mascot. It was freshman Jack Kersting who suggested the winning name, "WuShock."

In 1998, WuShock, also referred to as "Wu," marked his 50th birthday by undergoing a redesign and getting a pumped-up physique and revved-up attitude. The mascot's costume has changed over the years, as well. With the redesign, a new costume was introduced in fall 1998. In fall 1999, the head of the new costume underwent another redesign after a number of supporters suggested the mascot needed a more intimidating look. In 2006 it was decided to once again update the Wu costume. The general consensus was that many wanted the costume to more accurately reflect the depiction of WU in the school's logo. The new WuShock now has the ability to run, jump, and walk up stairs without help. Many officials feel that a more professional and intimidating mascot on the field will certainly bolster WSU's image.[19]

On October 2, 1970, the first, or "gold" plane (the twin plane to the second, or black, plane) carrying players and staff of the WSU football team took off from a Colorado airport after refueling, bound for Logan, Utah, for a game against Utah State University. It flew into a mountain valley too narrow to enable it to turn back and smashed into a mountainside, killing 31 of the 40 players, administrators and fans near a ski resort 40 miles (64 km) away from Denver. President Richard Nixon sent the president of the university a note which read, "Our thoughts and prayers go out to you in this time of sorrow."

The department was founded in 1928, the department of aerospace engineering has a long history of academic excellence, scholarship, and commitment to community. Located in the "Air Capital of the World," students and faculty benefit from Wichita's rich aviation heritage and close proximity to major aircraft companies. It has longstanding collaborative relationships with Airbus North America, Boeing, Bombardier-Learjet, Cessna, Hawker Beechcraft, Spirit AeroSystems, and other Wichita aviation concerns.

The Cooperative Education Program facilitates placements for students while they are in school. Outstanding students work as co-ops or interns locally and at NASA (including the Johnson Space and Dryden Flight Research Centers).

National Science Foundation and U.S. News & World Report statistics, for fiscal year 2008, ranked Wichita State University as Top 3 among all U.S. universities in money spent on aerospace research and development, with $32.9 million in expenditures. That's an improvement from the previous year's fourth-place ranking, and it places WSU in the company of Johns Hopkins University and the Georgia Institute of Technology, which were first and second, respectively. While ranking higher than Princeton University, MIT and Stanford University. WSU faculty, staff, and students participate in this research. Wichita State University is also among the few institution granting a doctorate degree in Aerospace Engineering which is of global repute.[20][21]

The department teaches in the areas of composites, structures, Engineering mechanics, computational Fluid dynamics, applied Aerodynamics, and Flight simulation. Related facilities, in the Aerospace Engineering department and the National Institute for Aviation Research (NIAR), provide students an opportunity to experience the use of aerospace design tools.

Our alma mater Wichita,
Stands Proudly on the hill;
Our sons and daughters bow to thee,
Our hearts with praise we fill.

Then, hail! Alma Mater!
Hail, thee, Grand and True,
Long wave the Yellow and Black,
O Wichita, Here's to you!

Around our lives are memories
That tenderly entwine; And
Thru the midst of the rolling years,
Of thee we build a shrine.

Then, hail! Alma Mater!
Hail, thee Grand and True,
Long wave the Yellow and the Black,
O Wichita, Here's to you!

Thy call to all that life hold dear
Is a clear and constant guide;
With Love and Truth and Loyalty,
And may they e'er abide.

Then, hail! Alma Mater!
Hail, thee Grand and True,
Long wave the Yellow and the Black,
O Wichita, Here's to you!

(Before basketball games, when the Alma Mater is sung, it is traditional for the entire crowd to shout "BLACK!" along with the song.)

The University campus includes the Edwin A. Ulrich Museum of Art. [24]