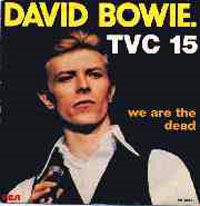 The song was inspired by an episode in which , during a drug-fuelled period at Bowie’s LA home, hallucinated and believed that the television set was swallowing his girlfriend. Beyond oblique mentions to absorption via television, the lyrics are largely nonsensical. Bowie himself hasn’t been able to shed any light on their meaning beyond the Pop anecdote, having very limited recollection of the "" sessions, due to his own heavy drug use at the time.

The song is considerably more upbeat than the rest of the album. It was chosen as a second single from the album in the UK, where it reached #33. With Bowie unable to perform on the show, "" promoted the single with a bizarre interpretation from resident dance troupe . The B-side, “We Are the Dead”, originally formed part of Bowie’s attempt to adapt "", and had previously been released on the "" album.

In America, "Stay" was preferred as a second single from the album.

* A live version recorded on the Heroes tour at the Philadelphia Spectrum, April 28-29th 1978, was released on "Stage".
* On , Bowie performed TVC 15 as a musical guest on "", accompanied by and Joey Arias.
* Bowie performed this song during the concerts July, 1985.